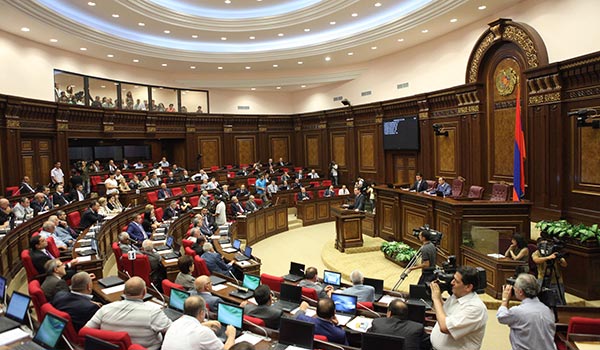 The plan of the new Armenian government was approved today in the National Assembly by a vote of 62 to 39.

The government plan heavily focuses on the concepts of rule of law, the eradication of tax evasion, economic monopolies, and government waste.

The lack of figures, data, and exact targets was criticized by the former ruling Republican Party of Armenia (HHK) which accused the government of focusing on general concepts rather than precise milestones, as to be able to avoid criticism later on if exact targets are not reached.

The ruling government countered that HHK did not meet many of the targets it set in its government plans over the years.

The mandatory pension reform system will go into full effect July 1st, in spite of a draft law proposed by Labor and Social Affairs Minister Mane Tandilyan to delay its implementation.

Prime Minister Nikol Pashinyan said given the economic realities, and the short and long term consequences of not implementing the law, the government had to make a decision based on national interest.

Elections To Be Held a Within One Year

Prime Minister Pashinyan announced today in the National Assembly that new elections will be held within one year from today.

He said that while it would be most beneficial to his party to have elections immediately given that they are at the peak of their popularity, it  would not give all political forces a fair opportunity to prepare and compete in the election.

Furthermore, he said that his government would require time to amend the electoral code.

Besides changing the constitution, which would require a two-thirds majority, the only option that the Constitution of Armenia provides for new elections is the prime minister resigning, and parliament failing to elect a new prime minister for two consecutive weeks