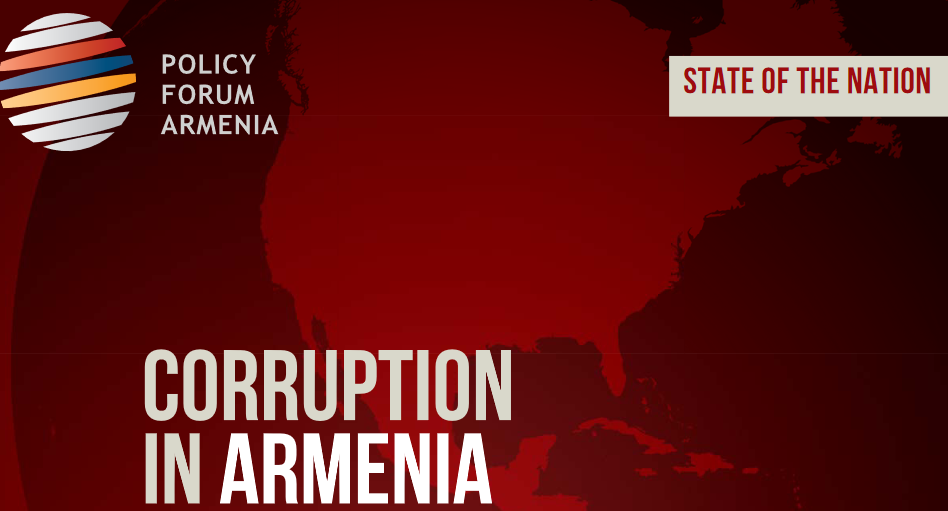 Corruption in Armenia: Not What You Think

The Policy Forum of Armenia has released its third “State of the Nation” report, this one entitled “Corruption in Armenia.” It is described on the PFA website thus: “New Report Deconstructs Corruption in Armenia and Sounds the Alarm for Political Reform.”

Sound an alarm it does. In line with its previous reports, the first on Diaspora-Armenia relations and the second on Armenia’s environment, it goes on to list the litany of issues while predicting dire consequences for Armenia if the country does not heed its words.

If the PFA’s goal were to establish that corruption exists in Armenia, as it does pretty much everywhere, it didn’t need to write a whole report on it. But it tries to do much more than that: it attempts to show that corruption is so widespread that it is severely hindering the development of Armenia.

Except it doesn’t bother with some major details and seems to care more for showing that it can put together a finely designed report with lots of references to economic jargon and carefully chosen information.

The problem with this report can be summed up succinctly: if you’re going to make a case for something, particularly an academic one, be honest.

Below are a few points about why I think the PFA is being dishonest in its “Corruption in Armenia.”

Although it’s second-nature for most people to assume that Armenia is drowning in a sea of corruption, that should not excuse the PFA from establishing, with evidence, the issue that they are addressing. They don’t.

Activists concerned with climate change can’t just take climate change as a foregone conclusion before they start pressuring governments to place restrictions on pollution; anybody calling attention to an issue they believe is a concern in Armenia should be required to assume the same burden of proof.

The PFA, conversely, tries to establish corruption as a fact in referencing studies that are not its own and by saying that it doesn’t want to “duplicate” those by doing its own analysis. I discuss why this is a problem in forthcoming points.

They excuse themselves from the task by saying that “without the political will to investigate cases and judicial systems to prosecute them, it is even more difficult to provide concrete quantifiable examples and clear evidence…” As in, it’s not their fault they can’t sufficiently prove corruption exists through their own study.

That’s all fine and good but you can’t address a problem by prefacing it with, “there is this problem which we can’t prove really prove exists and it’s not our fault that we can’t. But we’re going to use other sources – which is another reason why we’re not doing much analysis – that prove that it exists because these sources were apparently not precluded from conducting the studies we wouldn’t be able to do sufficiently.”

So, which is it? That corruption couldn’t be measured sufficiently or that the PFA just didn’t want to measure it because others supposedly had?

If you’re walking all by your lonesome in the desert, you might perceive that there is an oasis where you will be able to replenish yourself. The reality might be that there is no oasis and that your perception was just a mirage. We know the human mind plays tricks like this. Indeed, among the youth, this has been popularized by the meme “Scumbag Brain”:

So it’s important to know that oftentimes when you hear about “corruption” in a country, like when Transparency International reports about it, it’s not actual recorded corruption but a perception of corruption.

To elucidate the point, I’ll refer to the 2010 Armenia Corruption Survey of Households (sponsored by USAID) which is used in the PFA report, where the following is written:

“According to a majority (82%) of survey respondents in 2010, corruption is a serious problem in the country.”

Although the healthcare system is perceived to be the most corrupt institution, only 22% of those respondents who had a contact with the healthcare system said that they were asked for a bribe…People were rarely asked to pay bribes during contact with public utilities and communications institutions; only 1% of those who dealt with them mentioned that they made some unofficial payments. Only 10% of those who had contacts with the education and social security systems were asked for a bribe over the past year.

The respondents were asked also to describe the main scenarios of corruption cases in the public sector based on their personal experiences. In 2010, 22% of the respondents stated that in all cases, officials mostly do not directly demand a bribe. Rather, they show that they have expectations of money, some gift or favors. Another 14% say that in all cases, officials directly demand money, a gift or a favor. About 9% mentioned that in all cases they used their own contacts to get privileged treatment. Nevertheless, the majority of respondents mentioned that they rarely or never experienced bribe giving with public officials.

After doing a rotten job of establishing that there is rampant corruption, the PFA expounds on the effects of such corruption later in the report. This is called a straw man argument: attacking an issue which isn’t an issue but which was created solely to be attacked.

I know the people in the PFA are really smart but it would be great if they didn’t insult the intelligence of us common folk.

In releasing the report, the PFA said:

The report is intended to spur a debate on the issue of high-level corruption in Armenia and serve as a warning for corrupt officials that civil society organizations are ready to help identify and recover stolen assets—irrespective of their location—and return them to their rightful owners.

It would have been a great help if the space in the report or the effort expended to produce it were directed toward elucidating the assets stolen and high-level corruption that are so prevalent that they necessitated a report discussing their impact and resolution.

So say we don’t have to prove corruption is rampant in Armenia because, well, why would you have to do that if everyone believes it, right?

Even with that, I’m going to make the extreme proposition that the most current information available and the progression of that information over several years be used to give an accurate picture of the issue we’re considering.

As mentioned above, the PFA Report doesn’t use its own studies to establish that there is a corruption problem in Armenia; rather, it uses other reports. Unfortunately, from these reports, it uses both outdated information and it does so selectively, at that.

None of the reports the PFA uses in its 2013 “Corruption in Armenia” was conducted after 2011, making the newest one at least two years old. This despite there being more current information available.

If the argument goes that Armenia should have done much more in 20 years since its independence, an extremely short time in history, then we can also grant that two years is a significant length of time during which changes may take place. So would it not have been the responsible thing to do to use the most current reports? Reports that might show an improvement? I’m sure PFA would agree that every year counts.

Here is a sampling of information selectively used or omitted by the PFA report:

The Global Integrity Index, which the PFA cites, notes that Armenia was one of the most improved countries, second only to Liberia, in addressing corruption from 2009 to 2011 (a two year difference). The PFA does not note this in its report.

If you want to see how the Global Integrity Index measures corruption, you can read further here https://www.globalintegrity.org/global/report-2011/armenia/.

In the most recent rankings available, the 2012 World Bank aggregator of corruption perception around the world, Armenia is ranked in the same percentile range of the following pitiful countries with destitute economies: India, China, Argentina, Mexico.

Excluding the Baltic states, Armenia (37th percentile), Belarus (37th), and Moldova (33rd) come in only behind Georgia (64th) among former Soviet countries according to the World Bank rankings – all the others are ranked in the 0-25th percentile.

Along with the World Bank, the World Economic Forum noted a 10 percentile improvement in Armenia’s corruption perception between 2010 to 2012.

The WEF also indicates, in its Global Competitiveness Survey, indicated that between 2011-2012 and 2012-2013, Armenia gained 10 places in being globally competitive for business. In the 2013-2014 report, it showed that Armenia gained another three places (read: improvement).

Remember that in 2010, in the USAID-sponsored report cited above and also used in the PFA report: “Nevertheless, the majority of respondents mentioned that they rarely or never experienced bribe giving with public officials.”

I can’t speak to the motivation of the PFA and why it was so irresponsible in writing this report, although it’s not the first time. But besides feeding the despondence which is prevalent in the same reports that it uses to prove its case, the PFA report seems to have little else use.

But I’ll give credit where credit is due: the graphic designer should be commended for making a really beautiful looking report. It’s just that that thing about judging books and whatever by their covers is one of the few things that stuck with me from elementary school.

I’d like to note, in the likely event that I’m accused, that I do indeed believe there is corruption in Armenia. What’s more, I  believe that corruption should be vehemently quashed. Nevertheless, I want to have an honest discussion about it, with facts. Not selective and anecdotal cases presented as fact and then generalized.

Armenia should be the least corrupt country in the world and given some of the information discussed here, it seems that it can be. But I’m not willing to accept discussions of perceived corruption in Armenia based on false premises that are having a real effect on the psychological well-being of people in the country. If you’re not willing to be responsible in the information that you disseminate, and I’m looking at you PFA, just stop. You’re not doing anyone any favors, least of all Armenia.

If you believe in critical thinking, do it.

Published in Analysis, Economy, Politics and The Gampr