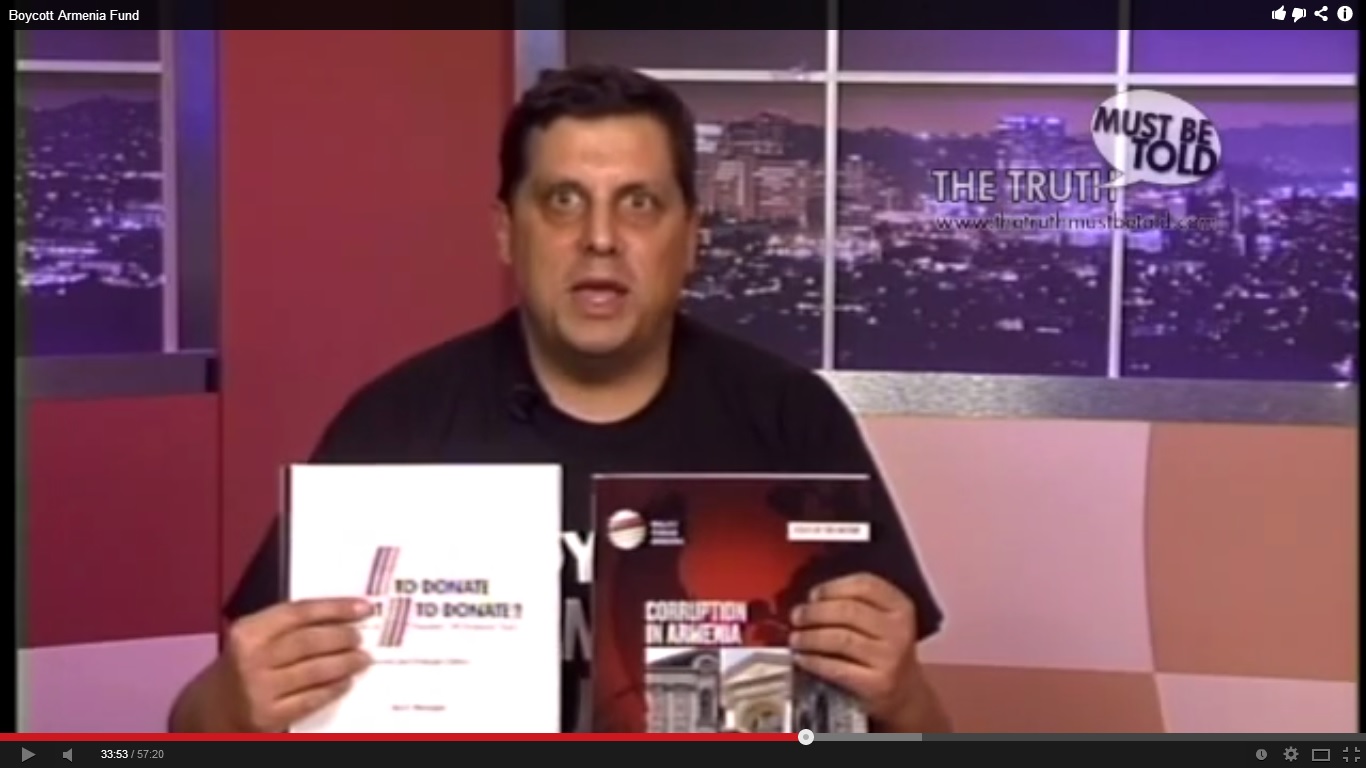 That’s right. Sanctions – remedial punishment for perceived wrongdoing – against Armenia. Except it’s not another country proposing them: it’s Armenians. There is a not-so-impromptu effort to get people to stop donating to the All-Armenian Fund during its annual Thanksgiving Day Telethon, money from which will go to development projects in Armenia.

As with most sanctions, they will affect not the governors that are ostensibly the source of contempt but regular people.

Behold a pernicious effort to divide a unifying force among Armenians that’s unfolding in our midst. At first it looks disjointed but it’s more coordinated than it seems.

Deftly timed to be released ahead of the All-Armenian Fund (called Armenia Fund in the U.S.) Annual Telethon which raises money for different projects throughout Armenia, the Policy Forum of Armenia released a report about its views on corruption in Armenia.

Ara Manoogian, a member of PFA and the creator of The Truth Must Be Told, has had a personal crusade, now at least a few years old, to assail the Hayastan All-Armenian Fund and has urged people to not donate to the organization that completes humanitarian and strategic projects in Armenia.

It just so happens that the PFA promotes Manoogian on its facebook page and Manoogian uses the PFA report to dissuade people from donating.

First, I’d like to note for the record that I’m not a big proponent of blindly donating money to Armenia. I think there are lots of other ways Armenians can and should help the homeland.

That said, I certainly recognize the immensely large impact the All-Armenian Fund has had on Armenia but, more than any other, its linking of the Republic of Armenia to the Republic of Artsakh and the development of the North-South Highway.

Second, I love criticism and critique. They are the exercises that allow our minds to expand, that require us to prove to ourselves the truths in which we believe, or change those beliefs altogether. That’s why I take such a dim view of what I’m going to discuss (and have before in this blog): poor, unsubstantiated criticism is not only worthless, it gives criticism a bad name.

If you’re going to tell me the “truth” because it “must be told,” you damn well better be able to prove it.

Here are the most common arguments I’ve seen for not donating to the All-Armenian Fund:

So, forget that the PFA doesn’t bother explaining how the government embezzles “more in a year than your combined donations,” they’re telling you to not donate to the All-Armenian Fund because of it.

That is, “government embezzles money -> don’t donate to the All-Armenian Fund.” Wait, what? Is that a logical leap or am I living in a different universe?

Oh, and if you want to know to whom you should donate, according to the last comment made by the PFA there, figure it out for yourself. This is called un-constructive criticism. Mostly because you’re not constructing anything to replace the destruction you’re attempting to wreak.

2) Don’t Donate Because All-Armenian Fund Is Corrupt, Too.

So it’s not just the Armenian government, Diaspora individuals, Diaspora organizations, but the All-Armenian Fund is also corrupt. Got it. So, I’m guessing the only non-corrupt thing in the Armenian world is the Policy Forum of Armenia…and Ara Manoogian.

And since the evidence for all this corruption is in plain sight, I guess they’re right. Except, no.

Well, there is this video where expert opinions are presented as evidence:

I didn’t know there were so many well-informed people ready to comment on Armenia’s economic situation at the Americana in Glendale, whose motto has recently been changed to, “Where you can shop till you drop and interview scholars on Armenia all in the same afternoon!”

I’ve also tried visiting TheTruthMustBeTold.com which is the website where the To Donate or Not To Donate? white paper by Ara Manoogian is contained. Unfortunately my computer won’t let me visit the site because my anti-virus detects a virus deemed a severe threat. Nevertheless, I found the white paper that Manoogian publicizes every chance he gets.

If anyone can extract something from that that actually proves endemic corruption in the All-Armenian Fund, please let it be known.

I’m open to being wrong and if someone can show me that there is proof of corruption in this video which is being circulated, tell me.

“And don’t ask me why because I’m so annoyed!”

Lara Aharonian, the founder of the Women’s Resource Center in Armenia, is also not a fan of donating to the All-Armenian Fund.

The WRC has an office in Shushi and I’m not sure how they would drive there from Yerevan if it wasn’t for the road built by the All-Armenian Fund (see below).

It also receives money from Counterpart International, an organization which receives funding from the U.S. government. But it’s really unclear what the WRC is using their money on. Actually, there is no publicly available report of how the funds at the WRC are spent. Is it unreasonable for taxpaying Armenian-Americans to ask how their money is being spent?

If the All-Armenian Fund provides an annual report and audits of its work by an internationally reputed accounting organization because it wants to show that the money of donors is being spent for the uses for which it is intended, let’s require the same of Armenian organizations that are receiving money from the U.S. government.

It’s rather audacious, and arrogant, for one to expect the assumption of good intentions about themselves while suspecting others of wrongdoing.

If the argument is that there is graft and that’s why people shouldn’t donate, could the same logic be applied to not paying taxes because there is terrific waste in government spending? Or perhaps we shouldn’t donate when natural disasters happen, as they so often do, because all the money doesn’t get to where it’s intended. Or maybe we shouldn’t donate at all. Is it really possible to be totally sure your money isn’t being used for something other than what you intended?

Actually, it almost certainly is. But that’s why you’re donating and not running the organization to which you’re donating in the first place. You entrust the people who are in charge to complete the task they’ve said they’re going to complete. You’re not supposed to manage

And you know what? Even part of the money being donated to the All-Armenian Fund is disappearing (of which there is no hard evidence, mind you – pesky thing that evidence), so be it. You know why? This is why:

In my trade, highways are called “supply routes.” That is, if you need to get supplies, for example, to soldiers, that’s what you use. Without them, all the weapons that you have stored in various facilities throughout the land are worth squat.

And you have this

Now, it’s one thing that to be annoyed at moronic attempts to get people to not donate to an organization that’s verifiably doing work, and good work at that. It’s quite another when someone suggests that that organization (the All-Armenian Fund) is doing wrong or shouldn’t be doing the work at all when that work is protecting Armenians from very real enemies.

If you don’t want to donate, don’t donate. But don’t lie to people when you can’t come up with a good reason for them to support you.

I’m going to donate $50, a paltry amount about which I am ashamed. If you’re able to donate more to make up for the boycott this year, you can follow the link here. If not, at least do Armenia this solid and don’t go around trying to convince others not to help.

I bid you a very Happy Thanksgiving and I’ll leave you with a final thought by the estimable Armenian hero, Garegin Njdeh, posted on the very cool blog People of Ar:

Published in Infrastructure and The Gampr