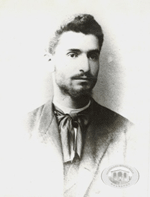 There are stories that show the exceptional devotion to the Armenian homeland among a new generation of young Armenians who realize that the future of Armenia is their responsibility and is a matter of their individual contribution to the future of the nation. This is one of those stories.

Tigran Petrosyan is a young man who lived in Australia for five years and recently repatriated to Armenia. He is currently serving in the defense units of the Armenian Armed Forces. He is stationed in Artsakh.

Razm.info spoke with Tigran Petrosyan, an Armenian repatriate from Australia who is currently serving in the Armenian Armed Forces in Artsakh.

After living in Australia for five years and receiving a college education, the 20 year-old Petrosyan chose to return to his homeland and establish permanent residency there. Thereafter, he was drafted into the army as is required by law.

Razm.info: You’ve decided to return to Armenia and live here. What is the reason behind your decision?

Petrosyan: After living outside Armenia for five years, I felt like something was missing; I didn’t feel happy, although I had whatever I needed: I studied at a good university, I had a good job. But after thinking about it long and hard, I decided to return to Armenia, live here, and start a family.

I didn’t have any legal issues [in Australia or Armenia]. Rather, I decided on my own to return to my homeland. My conscience is at rest, I feel better – better even than in Australia. And, in all honesty, my life here is better.

Razm.info: And had you thought about serving in the Armed Forces?

Petrosyan: Yes, of course. I had thought about it and was ready to serve. I had never given any thought to skipping military service. If I had, I wouldn’t have even returned.

Razm.info: How long before you started your military service did you return to Armenia? Did you see any changes [in the country]?

Petrosyan: I returned in the summer of 2013. About 4-5 months later, I was drafted into the military. As far as changes, yes, of course there were actual changes. I think that after my military service, I’ll see even more of them.

Razm.info: After living in a foreign country for so many years, how was the process of getting used to being called to military service? How were you able to adjust to the lifestyle change?

Petrosyan: Although I was gone for about 5 years, even abroad I tried to live as an Armenian. That is, I didn’t cut myself off from my roots. So, my return wasn’t a shock but the years away had surely left their mark.

The pre-military service preparations and tests took a bit long. In a few instances there were some mix-ups and confusion which were a result of my expired passport. In the end, after the bureaucratic hurdles, I was able to leave for my service.

Razm.info: You are now a military service member, you’ve given the soldier’s oath. How do you feel?

Petrosyan: I’m very proud and happy. A soldier’s oath has a special place in any man’s life and I’ll remember [mine] for a long time.

Razm.info: What are the main difficulties of military service?

Petrosyan: Honestly, I’ve been here for a few weeks already but I don’t have anything bad to say – I haven’t yet encountered any serious issues.

I like the food. I’m especially pleased with our uniform. I’d like to start shooting exercises as soon as possible. Until now, there have only been positive emotions on my end – again, I’m really happy. The only yearning I have that I’m reminded of often is that for my family since I’ve been away from them for so long; that feeling is always with me.

Razm.info: You said you liked the food in the Army. What’s your favorite?

Petrosyan: I think I’d say my favorite is the bread and cheese we’re served for breakfast.

Razm.info: And how have you adjusted to waking up early?

Petrosyan: In Australia I’d wake up around 5:00AM so here it’s a bit more humane (smiles).

Razm.info: Which weapons [or, military equipment] do you like the most?

Petrosyan: I love cars and my expertise is in that area so naturally, I’d like to be a driver [of military vehicles]: Ural, Kamaz, or Satko trucks. I also really like tanks.

Razm.info: What would say to conclude?

Petrosyan: [To fellow soldiers] Happy military service and happy return to all!

Published in Society and The Gampr