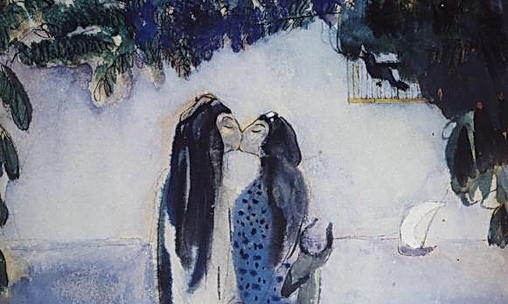 No matter how many times you watch that scene, hoping that she keeps her word – maybe even scoots over to make some room on that darn plank- the inevitable happens: Rose lets go of Jack’s hand, his prepubescent body sinks into the abyss, and all that’s left behind is a lousy necklace and a Celine Dion song, destined to haunt the airwaves and reality-show singing competitions for generations to come.

And no matter how many times you read Hovannes Tumanyan’s Akhtamar, the courageous young man, who each night secretly swims across the waters of Lake Van to be with his lover, Tamar, eventually drowns.

The tragedy would be overwhelming were it not for the love they shared on those other forbidden nights, when they held their bodies close as the waves crashed against the shores of the famed island.

Turn the lights down low, pour yourself a glass, grab that special someone (or that profile picture you copy-and-saved from their Facebook page), and let’s take a brief stroll through romance in Armenian literature.

They seem to be whispering softly…

And the stars from the sky vault

Glance down with slanderous eyes

At the immodest, shameless Tamar…

As much as the couple was set ablaze by the intensity of their love, like all great love stories – Romeo & Juliet, Zack Morris & Kelly Kapowski (the high school years) – their time was brief.

One night, as the valiant lover is swimming toward his sweetheart, mischievous men extinguish his guiding light, sabotaging the amorous journey. Tamar, who had always lit the flame to guide her beaux safely into her arms, stood helpless as the dark waters and unforgiving winds claimed her beloved.

The agitated waters of mourn,

Threw the body on to the shore,

At his cold and stiffened lips,

As if at the moment of death,

Love in all its glorious forms can tear you to pieces and mend you back up again. Unless, you’re King Ara the Beautiful. Then all of the licking in the world, from the pantheon of pagan gods can’t put you back together again.

If you’re into rom-coms, you might not like this grand tale of lust and war. It’s like an epic Fatal Attraction, except Michael Douglas’ character stays faithful  and doesn’t live long enough to marry Catherine Zeta-Jones (it could’ve been us Zeta-Jones, could’ve been us!).

According to the History of the Armenians by historian Movses Khorenatsi, the Assyrian Queen Semiramis had a little crush on the Armenian king, Ara, a.k.a. the-handsomest-lad-in-the-land. Calling it a crush seems an understatement when considering that she hungered and lusted for him day and night – before ever actually seeing his face.

Having heard speak for many years of the beauty of Ara, she wished to possess him; … she discovered her passion freely, and sent messengers to Ara the Beautiful with gifts and offerings, with many prayers and promises of riches; begging him to come to her to Nineveh and either wed her and reign over all…or fulfill her desires and return in peace to Armenia, with many gifts.

An open invitation to the insatiable queen’s bed, along with the keys to her kingdom tucked underneath her pillow– well, lesser men would have gladly taken that deal. But the sought-after king was not interested. Ara, already married, stood steadfast and devoted to his wife Nvard, consistently refusing the queen’s advances.

Semiramis, also married, didn’t really give a hoot. The heart wants what the heart wants, and her heart wanted what her eyes had never seen. So she did what any person in love would do: she became incensed and, perhaps giving the word its romantic connotation, sent her army to crush Armenia and bring Ara back to her.

But, as she had beforehand declared, it was not so much to kill him and persecute him that she went, as to subdue him and bring him by force to fulfill the desires of her passion.