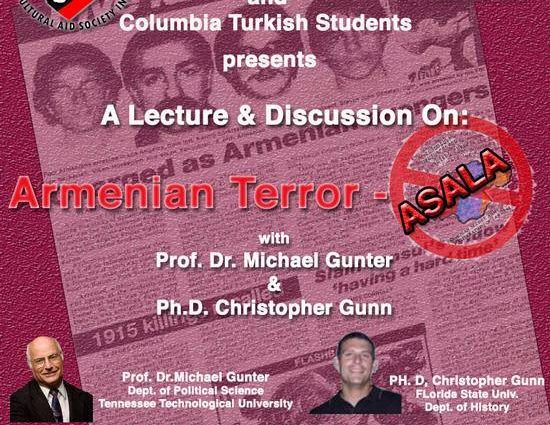 The Armenite contacted Columbia University for comment and Robert Hornsby from the External Relations office had this to say:

Student groups have latitude in conducting activities and inviting speakers consistent with their own personal interests and beliefs, so long as they comply with University policies.  Allowing students to exercise their speech rights – as they do on many issues — does not suggest that the University endorses any particular views.

We asked if those rights cover inflammatory and hateful rhetoric directed toward one group but we have not yet received a response. We have also contacted the Office of the President.

Narek Sevacheryan, a student at the university and member of the Armenian Society there, noted that this sort of event is unfortunately not uncommon at Columbia University, saying that a few weeks ago, “they [Turkish students] invited someone named Edward Erickson [who labeled] the Armenian Genocide a “counterinsurgency” thus trying to justify the massacres of 1.5 million Armenians as a military strategy out of necessity.” He added that, “hatred and aggression have no place on our campus.”

We continue to follow the story and will have updates as they come.

A group called the Young Turks Cultural Aid Society Inc., along with the Columbia Turkish Students group, will be hosting an event one day after the international commemoration day of the Armenian Genocide, on April 25, 2014, on the campus of Columbia University in the City of New York.

The Young Turks, also known as the Committee of Union and Progress, were a group formed in the early 1900s that orchestrated the genocide of 1.5 million Armenians.

“Once upon a time, deniers were so wild and obvious buffoons that they claimed that the Ottoman-Turkish government protected and took care of the poor Armenian exiles in their forced march out of Armenia. … Now increasingly we have a whole series of recognized academicians who write in our contemporary language of scholarship and make their points in the name of open discussion and fairness. Gunter can be congratulated that he has risen to the top of this group.”

You can read more of what Charny said about Gunter here.

Gunter will be joined by Christopher Gunn, a Ph.D. student at Florida State University. Although Gunn is listed as “Ph.D, Michael Gunn,” [sic] records indicate he has not yet received his doctorate degree.

The Young Turks website as listed on the Turkish Coalition of America’s webpage didn’t work. Also, the Federation of Turkish American Associations is listed as a partner. The Armenite sought to find out more about the organization but the website listed on their Facebook page is also a dead link.

You can follow The Armenite for updates as they come.

2014-04-21
Previous Post: Zabel Yessayan: Portrait of the Writer as a Young Woman
Next Post: Letter: Yessayan a Complex Nationalist