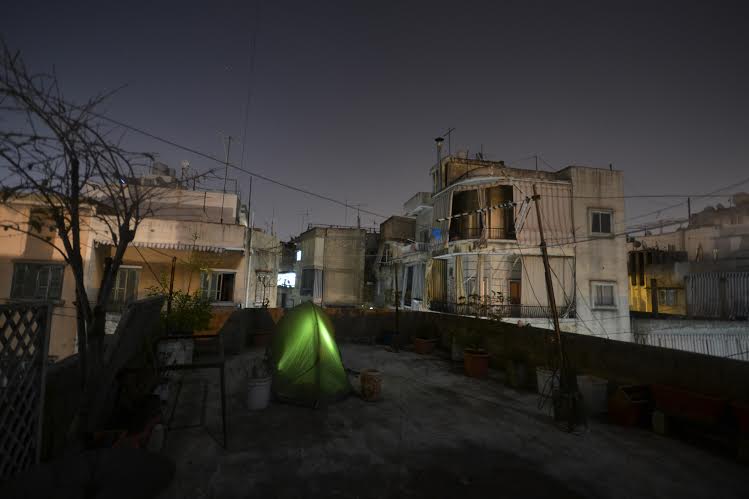 My Time in Bourj Hammoud: Doing Dishes and Sleeping on the Roof

For most of my life, washing dishes had just been a simple case of cleaning leftover food off of crockery and sticking it on a drying rack. But now, I was living in Bourj Hammoud with an Armenian family and things were different. Washing dishes had become a spectator sport and camping out on the roof was met with confused glares.

I spent the first few months of 2013 living in a small, two-bedroom apartment in Bourj Hammoud with my wife, Victoria, and her extended family: a group that consisted of 10 Syrian-Lebanese Armenians, two dogs, two parrots, five turtles… and an entire air armada of pigeons (not exactly part of the family, but a part of the overall atmosphere indeed.) I was sharing a living room with four others and was woken up by my cousin-in-law’s alarm at 7am on a daily basis. Things were cramped, to say the least, and it was becoming a drag. So, I soon found sanctuary somewhere else: the building’s rooftop became my bedroom.

But despite the odd living quarters, I loved being in Bourj Hammoud. I’d count down the minutes until I’d get off work and be able to take a short, overpriced taxi ride back to the great bastion of Beirut’s Armenian-ness. For those unfamiliar with the area, Bourj Hammoud is largely known as the Beirut suburb that many Libanahyes (Lebanese-Armenians) call home. Armenian flags adorn almost every building, the unforgettable icon for the Armenian Revolutionary Federation is often spotted around town, and places like Basterma Mano, Arax Street, and Mesrobian High School serve as reference points when directing taxi drivers in the area.

In short, this place has got charm. It’s a labyrinth of narrow alleys, bedraggled street animals, clapped-out cars serving as storage units for cluttered corner stores, and screams of annoyance whenever the power cuts off for the fourth time that day. It’s dusty, dirty, smells bad, and you’re never far away from some extremely public family drama. But the kebabs are delicious and it’s a pleasant place to wander around with the dog. It’s where my home was for a few months and I loved it.

So, as the sun came up over the perennially hazy Lebanese sky, the sea of satellite dishes, generators, and wires casting long, dancing shadows over the rows of rooftops, this writer awoke on his own roof to start a new day.

Usually, my morning would begin by unzipping the flap of my small green tent, crawling out of my makeshift sleeping hole, and meeting the gaze of a bewildered old Armenian lady who sat on her balcony every morning at the building next door. She’d look at me with an expression that was a mixture of suspicion, amusement, and disapproval. “Just who is this strange, foreign man sleeping in a tent on the roof each night?” I imagined her wondering. After that always-awkward, silent exchange that marked the beginning of my morning, I’d stand up clumsily, make my way past the pigeon roosts, clamber down the bare concrete stairs, climb over the piece of wood that stopped the dogs from getting to the roof, and join the rest of my family inside our apartment.

This entertaining yet not-so-normal routine continued for a while. Various relatives would come and go from the apartment; I’d have no idea who most of them were, but they all knew me as Victoria’s husband and I was fine with that. Soon, I became comfortable with my living arrangement. Victoria’s family didn’t speak much English, but we all got along well, and I decided I should ingratiate myself more with the family by helping out around the house. I noticed that, generally, the ladies of the family looked after the home while the men headed off to work to earn money. I, with my freelance writing work and its antisocial hours, spent a lot of time at home during the day, so it only made sense for me to help out with the domestic duties.

It was on a warm February afternoon when I entered the narrow apartment kitchen and saw the sink piled high with dirty dishes. A perfect opportunity to help out, I thought. I turned on the faucet, waited a few seconds for the hot water to come on, and dived into the job I often volunteer for when being hosted by family or friends. In the middle of my task, Victoria’s grandmother walked into the kitchen and, upon seeing me at the sink with hands covered in soap suds, she shrieked louder than ever before and scurried out of the room. I had no idea what just happened.

A couple of minutes went by in the quiet surroundings of the almost empty home. The men were all at work, the dogs were sleeping in the living room, and Victoria was at her aunt’s house. It was just me, Victoria’s grandmother and her daughter-in-law, Ani, at home. But, in a matter of minutes, my grandmother-in-law had returned, dragging Ani, and a camera with her. She pointed at me frantically, a look of sheer hilarity on her face and began talking speedily to Ani in Armenian. I’m not sure what she said, but I envision it being something along the lines of: “A foreign man in the kitchen doing dishes! Can you imagine?!”

And so happened another revelation in my newly acquired Armenian home. Due to the trauma of the event, I made sure that whenever I did the dishes again, I’d be the only one in the apartment. And if I wasn’t there, you could find me up at the roof trying to get some shut-eye, all the while avoiding the amused Armenian lady across the street. Just another day in Bourj Hammoud for me.