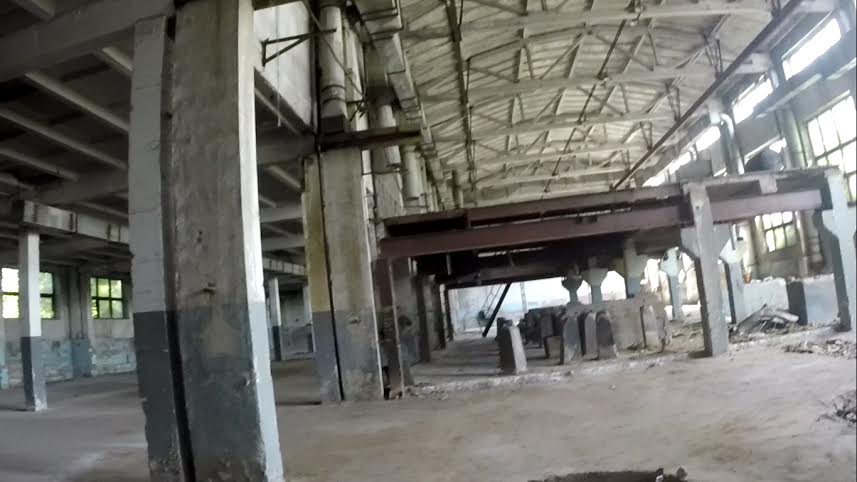 The Day Urban Exploration Almost Got Me Killed

“There’s a guy. I think he sees us. Better move out of the way. Wait. He’s running. RUN!” I shouted with urgency to my wife and our new friend. The next thing I knew, Victoria, Jerry, and I were embroiled in a high-speed pursuit through the overgrown grounds of an abandoned Soviet-era factory. Unfortunately, I was the only one wearing legitimate shoes: my fellow explorers were both donning flip flops – hardly the choicest footwear for careening through bushes, jumping over broken window panes, and avoiding rusting industrial fare.

The day had started normally for Victoria and I. We had woken up in our tiny one-bedroom apartment on Teryan Street, shared a breakfast of eggs, Armenian white cheese, fresh lavash, and tea with Jerry – a guy who had found us on Couchsurfing.com and was now crashing at our place – and spent some time gazing out the window. Below, on the Teryan-Aram intersection, a construction crew was gradually decimating some of the final remnants of the “old” Yerevan Kentron. A group of historic homes, overgrown with foliage and in various states of ruin, were being bulldozed to the ground to build a new thoroughfare linking Teryan to Zakyan Street.

Our guest, Jerry, was a laid-back fellow who was born in China, but raised in New York. He had a relaxed air about him, always with an easy smile on his face, and was evidently a fan of adventure. Jerry was riding his motorcycle from Beijing to Berlin: the next chapter in his life after running nightclub events in China’s burgeoning urban sprawl. Now, he was moving to Berlin, so why not ride a bloody motorcycle there? In any case, Victoria and I were more than happy to host Jerry for a few days at our place. As we watched a construction worker take a large, pneumatic drill to the remains of an old stone wall, Jerry asked me if I knew of any old, abandoned factories that we could explore. “Urbex?” I replied. “Hell yeah, I know a place.”

Yerevan must be one of the premier locations of old abandoned factories and decaying industrial realty in the world. All over Armenia’s cities sit gargantuan complexes of formerly-glorious-but-now-rusting industrial finery, a hallmark of Armenia’s long Soviet heritage. In many countries, old factory complexes are pulled down and replaced with glitzy skyscrapers and aged warehouses are redeveloped into funky hot spots full of trendy wine bars, expensive shops, and high-end residences. Vancouver’s Yaletown is a prime example: what was before a grungy warehouse district and terminal for train lines and lumber yards has become prime waterfront real estate and the home to Vancouver’s wealthiest and most pretentious tiny-dogs-in-handbags-and-huge-shades brigade. Not my favorite place to hang out.

But in Yerevan, the old stuff still exists – and I knew the perfect place to take Jerry for some good-old urban exploration. I don’t travel by Yerevan’s metro system often, but every time I pass by Tigran Mets station going south, my eyes immediately turn to what looks like a factory complex that sits close to the metro line. Everything a budding Urbex enthusiast would want is there: an old network of railway tracks, external ladders leading up to cast iron rooftops, walkways and water towers, grimy multi-pane windows, and overgrown grounds once fit for welcoming huge haulage trucks full of whatever – all encompassed in a bloody massive building, finished in Armenia’s iconic pink stone.

If this particular complex was in the western world, it would have long since been redeveloped into a world-class “urban village.” But in Yerevan, it sits in ruin. Jerry, Victoria and I finish our breakfast and set out.

An hour later, we’re sitting crouched in a group of bushes on the factory grounds. The place is deserted and lacking any “no entry” signs. It’s just a giant, decaying factory built in an enormous U-shape, with an arched entrance large enough for long-distance trucks to pass through at the top of the U and expansive open space in the center. In Vancouver, this place would have already been converted into a multi-level mall, filled with coffee shops, funky boutiques selling organic soap, and some unaffordable apartments. But here we sat, in the middle of this gem of a building that was gradually falling apart, with no sign of repair.

Once we ventured through the entryway and climbed over the remains of the front door, the first thing we discovered was an old gas mask. I’d seen the same ones for sale at the Vernissage market: usually for about 5,000 dram and in the same camouflage-green color that all things military are finished in. We wandered further and found old Soviet drinking cups, made with metal and painted in cream, save for the black handle and rim around the top. We also discovered an office space covered in papers – all in Russian and undecipherable to us. The furniture was doused in dust, but if you were in the west, you’d probably find something like it at an expensive antique store. “Shabby chic” is the popular term these days, I believe.

The factory itself was massive: an open-plan room the size of a football field, filled with metal girders, fallen cables, and dust-covered pieces of paper all around. The ceilings looked at least 20 feet high. We climbed up a crumbly concrete stairwell and entered another office, coming face-to-face with decades-old posters and calendars on the walls depicting hammers and sickles, closed fists, and of course, Vladimir Lenin’s portrait. Eventually, we came across an old Armenian identity book. Inside, we found out what this place once was: a former wool factory. Why they needed such a huge space just to make wool products, none of us knew. Maybe this was the premier wool production factory in the entire Soviet Union. No matter the reason, from the looks of it, it seemed like everybody who worked at this place had gone home one night, and the next morning, Soviet Armenia had collapsed and nobody had ever returned. Here we were, more than two decades later, taking it all in.

Shafts of sunlight streamed through the cracked window panes; it was time to explore outside. We peered through one of the office windows to get a good look: all was quiet in the garden area.

We descended the stairs, tripping over the plethora of papers and broken metal panels, and tried not to kick up too much dust along the way. Outside, the summer air was fresh and cool – far more pleasant than the stuffy, stagnant air inside the factory. Working conditions could not have been wonderful at this place.

The central yard was our next location to explore. We squeezed through a gap between two heavy, dirt-covered sliding doors and into the sunlight. The yard was overgrown with foliage and the concrete loading docks were cracked, with saplings peaking through the platforms. I imagined how things could be here: families basking in the sun over fresh coffee and lahmajoon, children playing, a bustling, vibrant atmosphere. But instead, it was just us. Jerry got out his camera and began to take some photos.

It was then, crouched at the end of the yard, that we noticed a man. Earlier, everything seemed to be deserted. Now, we watched as the man discovered us from some 100 meters away, did a double take, and got up from what he was doing with anger. He started running towards us. That’s when we ran, too.

The chase took us through thick undergrowth, between narrow walls, and over railway tracks. We stopped, taking cover around the back of the building. The road, where a bridge ran over the top of the metro line and met Tigran Mets street on the opposite side, lay just a couple hundred meters away. Between us and there was unknown territory. We made a break for it.

Seconds passed that felt like hours. We ran with all our might. Victoria’s flip flop came off, and she wanted to go back for it. I shouted for her to keep running. We ran and ran, then ran some more. From the undergrowth behind us, we heard some commotion. It was the man. We were almost home free. Just one wall to vault, and we’d be on the road. I catapulted up and looked back. As Jerry climbed across and I helped Victoria over, we saw the man’s figure emerge from the bushes. He saw us, but we were already on the sidewalk. Frantically, we flagged down the nearest taxi, jumped in, and shouted “Hrabarak!” to the driver. He seemed to understand our urgency and sped off. We laughed. Looking out the rear window, we passed over the crest of the bridge and onward to freedom. Time for a visit to Mama Vernissage, we decided. We’d certainly earned our lunch that day.