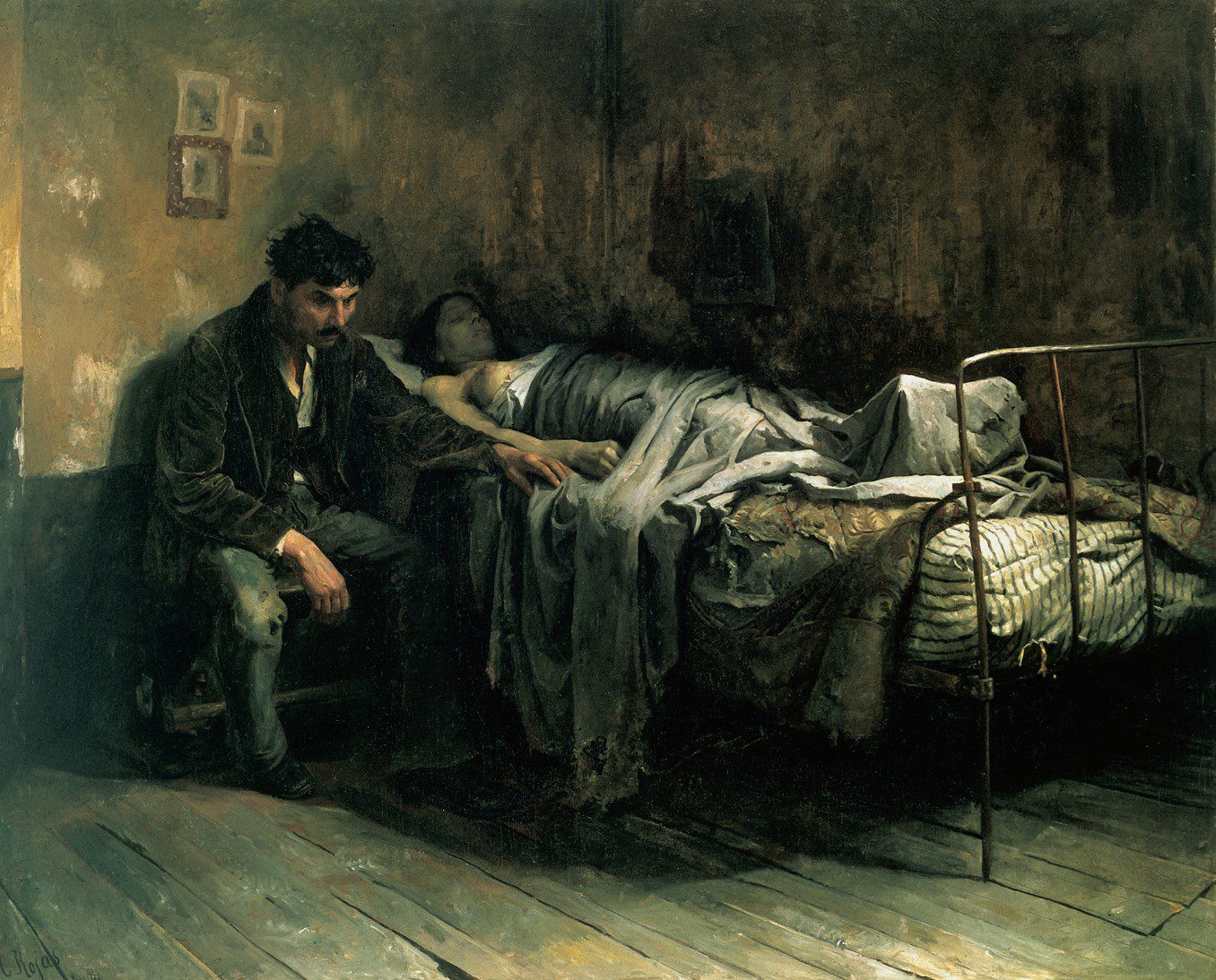 Born into a family of peasants in 1899 and executed during Stalin’s Reign of Terror in 1937, Aksel Bakunts made the most of his short-lived life as a writer and activist. His collection of short stories, Mtnadzor, or The Dark Valley, was first published in 1927, and told the story of the years during Armenia’s transition to communism. Nairi Hakhverdi later translated the set of 18 stories and the following is an excerpt from that translation.

The shrill squeal of the zurna and the broken din of the dhol on a sunny autumn morning on the sunny side of the village, which lay on the slope of a hill, seemed peculiar.

It was neither a wedding, nor a banquet, nor a baptism. This is not how the zurna is played, with puffed-out cheeks and the player’s perpetually half-closed eye as dancing intensifies and begins to thud.

At first, it was difficult to determine from which underground hut the sound was coming. When stumped I asked a familiar villager, he did not want to tell me at first, but then he pointed to a house across from us and said:

“It’s been ten days that they’ve been playing like this, day and night…”

The house across from us: slightly tilted with an inclined rooftop, and on the rooftop a stack of dried cow dung that resembled a shepherd’s hat and a row of yellow gourds. The only window that gave onto the street was covered with a sheet from the inside.

A zurna was playing inside, a dhol was beating, and some people were stamping their feet on the room’s stone floor. The door of the house was closed and there was no one in the courtyard. And when someone walking down the street passed by the house, he would not stop in front of the covered window, and he would not listen to the music of the zurna. Instead, he would quicken his pace.

And my familiar villager moved away a little, sat on a log in the street, wiped his brow, and said:

I couldn’t determine what disease it was that took over so suddenly and, as they said after having thought about it long and hard, hit after an unexpected loss or immense joy. The bones of the ailing person hurt.

“The pain crawls through the entire body like a worm… It pierces the knees and then hides behind the heart. The worm needs to be killed.”

And they kill it with the “dancing mania.” Hired weeping women sit in a half-lit room and the patient sits next to them. The hired women weep, mourn, and whimper, and the patient’s heart weakens; it looks like it’s extinguishing, then suddenly the patient leaps up and starts to dance, mindlessly, like a bounding lunatic, throwing himself to the floor, he shatters his body and dances, dances for hours. He sweats and raves, but his dancing thuds on. The zurna player sitting in a corner of the room squeals the zurna, the dhol pounds fast, and it seems as if the music penetrates bones, and the body, with each thump of the dhol, bounces up and down like a football.

This is how it starts and lasts for two days. They play day and night, the tired zurna player is replaced by another, the zurna squeals again, the dhol pounds, and the patient dances until he faints. They lay the patient on the bed, take a short break, and then start again.

If the patient does not heal in two days, if he still complains about the piercing “worm,” they resume the dancing, this time more wildly, more senselessly, more savagely.

They put the wide bell flare of the zurna against the patient’s ear, one to the left, one to the right, and they start blowing as much as their lungs can hold air. They also put the dhol on the patient’s head and beat its tightly drawn skin with wooden sticks. They blow into the zurna with all their might and drop sticks on the dhol like hail.

The patient shakes in pain, unsatiated by the sounds, gets up on his feet and starts to dance again. It is at this point that two strong men walk in and the most terrible part of the “dancing mania” begins.

They hurl the patient to the floor, trample him, pull at his soft skin, grab his arms, stretch him, push him from one wall to another, kick him, take him by the veins, tug at him, break his fingers…

“A living person couldn’t bare a second of that torture,” the familiar villager was saying. He had also been called on, and one time he, too, went to break a body.

“When I was tugging at the fat on the back, I was thinking, the flesh is going to rip off now… But the patient doesn’t feel any pain…”

And he twisted his thumb and index finger in such a way that it resembled a kite’s beak.

I have asked many people about the “dancing mania.” Everybody says the same. The patient is crushed, men kick him, break his arms, his body bruises, he bleeds, but supposedly the patient doesn’t let out a peep–“he likes it.”

The men feel exhausted, their arms get tired, and they sweat in the semi-darkness of the room where there is no more air to breathe, because doors and windows are tightly covered. Someone else substitutes whoever is exhausted, the zurna squeals again, hired ladies in a dark corner moan and groan, cry and scratch their face, and the patient dances or men roll him, drag him across the floor, and always work at “catching the worm.”

Days go by like this, day and night constantly, until the patient either gets better or dies. Exhausted from dancing, with his crushed body, he lies on the bed, the zurna dies down, the women stop crying, and when the resting period takes too long, one of the women walks up to the patient to see if he’s still breathing…

“Last year, in our village, three brides were sick with the ‘dancing mania’… One of them was even with child,” my acquaintance was telling me, sitting on the log in the street; and a little farther down, a zurna was playing monotonously, tediously in the room with the cloth-covered window.

“Two of them healed, the other one destroyed her baby, and now she has no body left…”

Usually they start curing in the autumn, because the “worm” begins to crawl when it starts getting cold and wounds come out. There are old women in the village who know that that’s the “dancing mania.” And so they start to prepare, calling zurna and dhol players from neighboring villages, two or three “sets” of them, so that they can substitute each other.

I wasn’t able to check how much the zurna and dhol player make. According to the chairman of the council, they agreed on eight rubles a day. Many zurna players can’t bear it and don’t agree to play, even for a high price. Newly trained zurna players always gladly agree–they get to learn, because no one expects proper music from them, only lungs like a blacksmith’s bellows.

“This woman who’s dancing came from abroad. They couldn’t help her in the city… Whatever great doctor she was taken to said it was ‘tuberculosis,’ that it can’t be cured, that she should be taken to her homeland… Now she’s being cured here.”

When I glanced over at my interlocutor’s hairy face, a wisp of wool in each ear, I couldn’t tell whether he was joking or whether he was genuinely convinced that “she’s being cured here.”

Generally it’s women who catch the “dancing mania.” Men do so less frequently. The patient of that day had lost her two sons in an unfortunate accident, the pain had taken over her mind, her cares had grown, and the “worm had nestled in her heart.”

“She’s young, but if you saw her, let that dried-up twig serve as an example. Worn, yellow, the peel of a quince!”

I asked him how it was that the patient is able to endure such indescribable torture, how is it that she doesn’t breathe her last.

“Some do breathe their last, it’s not without that… The melody of the zurna pleases them, the sound of the zurna penetrates their bones, and just like water coming to a boil, the pain makes them jump up.”

Supposedly the patient can be identified on the very first day. If the music of the zurna pleases her, if the weeping ladies with their mourning and songs are able to squeeze tears out of her eyes, if the dancing gets to her arms, then she has the “dancing mania.” The old women have correctly diagnosed her and only a zurna player and arm-breaking men can cure her.

They give the patient little to eat: a piece of dry bread, a cup of water. “They have to stay hungry for that ‘worm’ to come out.” They used to cure the “dancing mania” much more horribly before. The zurna, the endless pushing and pulling, the weeping ladies had all been there, but there had also been smoking dung and dried dog excrements on the smoking dung.

The unconscious patient would be lying under a blanket, they would have covered her head with the blanket and put the smoking dung like a censer with incense in front of the woman’s nose until the suffocating, poisoned patient angrily convulsed, threw the blanket aside, jumped up so that she could dance under the zurna’s all too cursed “jazz band”…

Now the smoking dung has been forgotten, but the dancing remains, day and night, with zurnas and dhols, in a semi-dark room, with the delirious bounds of a starving, emaciated patient, the “dancing mania” continues to exist in our quiet, hidden villages as a “savage tradition.”

“She’s been dancing for twelve days now… They’ve called three sets of zurna players, and the ‘worm’ is still moving…”

We got up and I walked past the sheet-covered window with my familiar villager. From the room you could hear the monotonous, tedious sound of the zurna, the dhol was pounding, and you could hear the now faint, now heavy irregular footsteps from the room, as if they were beating the tiles of the floor with shepherd’s crooks…