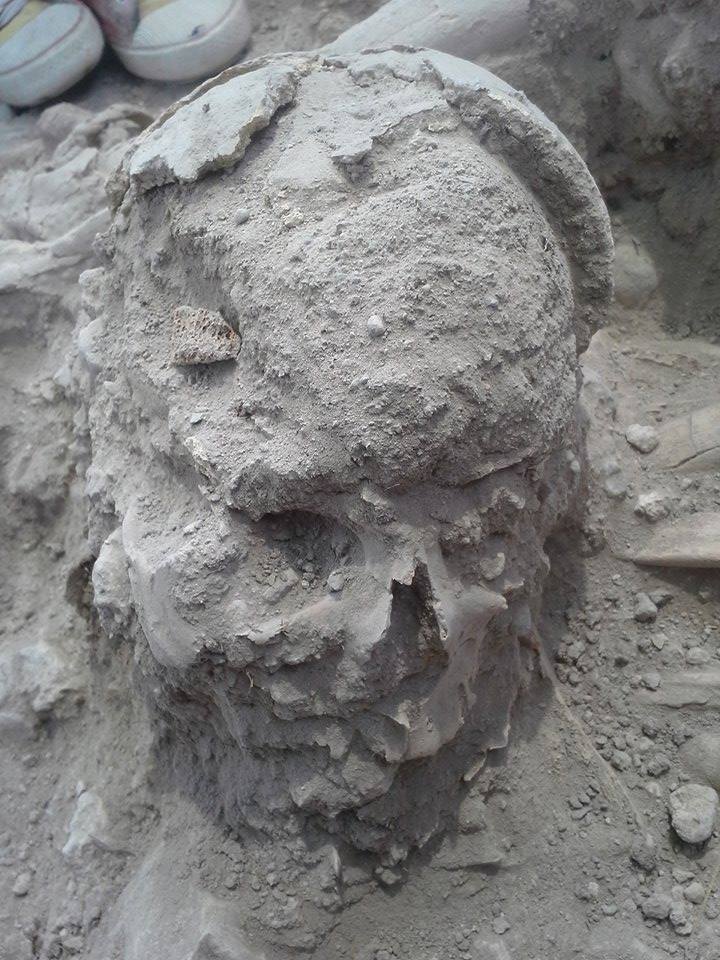 An Epic Archaeological Dig is Rushing to Excavate a Massive 2,600-Year-Old Cemetery in Armenia

A team of professional archaeologists are excavating a massive 2,600-year-old Urartian cemetery (or necropolis, literally meaning “city of the dead”) in Karmir Blur, Armenia, also known as Teishebaini during the time of the Kingdom of Urartu. The location and its environs are near Armenia’s capital city, Yerevan. According to on-site anthropologist, Dr. Armen Martirosian, a medical doctor by profession, the site may be “the largest Iron Age necropolis in the Near East, if not the world.”

(You can read Dr. Armen Martirosian’s first-hand account from the excavation site at the end of this article.)

In case you’re hazy on ancient history, Urartians were the immediate predecessors of the Armenian people, their kingdom located around Lake Van and Mt. Ararat – many scholars believe the name Ararat is a variation of the name Urartu.

[pullquote align=”left” cite=”” link=”” color=”” class=”” size=””]Fifty people are working feverishly to excavate a site of hundreds of tombs and up to 1,500 individuals before the six month deadline – a monumental undertaking.[/pullquote]

The discovery and excavation of this site may uncover a great deal of new information about the Urartian culture, as well as lead to a better understanding of the genetic makeup of Armenians and their relation to their ancestors from Urartu. It has already been determined through genetic testing that Armenians have existed as a distinct gene pool for at least 3,500 years. Although this site is only 2,600 years old, its existence around one of the centers of Armenian culture will teach scientists about the interactions between Armenian and Urartian people and culture.

The site was discovered two years ago during surveying for the North-South Highway. After two test digs, archaeologists found significant historical artifacts, after which Armenia’s government and the European Bank for Reconstruction and Development (EBRD) made statements about ensuring the inviolability of the ancient site. But, the highway is scheduled to be built and even if it doesn’t ultimately go through the archaeological site, the people excavating there now aren’t waiting to find out.

The government of Armenia has allowed for six months for the dig to be done. It is also the only sponsor of the project, allocating funds to pay the people working. Those people are part of a wholly local team, led by Hakob Simonyan, director of the Cultural Heritage Center in Armenia, and it is composed of excavators, diggers, and archaeologists. Fifty people are working feverishly to excavate a site of hundreds of tombs and up to 1,500 individuals before the six-month deadline – a monumental undertaking. And they are already down to only five months.

In that short amount of time – interrupted by a blazing sun that often cuts the workday shorter than they’d like – they have already exhumed several skeletons. Although they can’t yet be sure of who those exact individuals were, Dr. Martirosian believes that two of them were soldiers buried together, another two were master and slave (or servant.) There are skeletons who were buried in the fetal position, as well. Besides the skeletons, they’ve also found “a goat kid, a turtle, horse teeth, carnelian beads, and a dog.”

You can see him describe some of their finds in a video taken by volunteer, Timothy Straight:

It’s yet unclear whether construction of the highway will continue as planned in six months, whether construction will be further delayed for the dig or, in the best case scenario, the road moved to circumvent the site altogether. For now, the team is not taking any chances: their goal is to excavate whatever they can from the invaluable treasure at Karmir Blur before their deadline. It may be their only chance.

Using a delicate dentistry tool called a scaler, I scraped the soil under Ligo’s head with my left hand, using my right to cradle the cranium in case the dirt along the attached end gave way and his skull tumbled down. At times, I switched the scalar with a soft bristled brush, clearing the newly excavated layer to better see the gap. Though Ligo was buried on his back, with his arms bent toward his hips, his head, with his long graceful neck was turned toward the left (whether this happened before burial or after is yet to be determined), looking in the general direction of Rigo, his fellow tomb occupant. After a great deal of delicate excavation, a small tap on the remaining dirt keeping Ligo’s skull in place was enough to free his skull and have it roll into my waiting hand.

For the first time in 2600 years or so, Ligo, a warrior from the Late Iron Age kingdom in the modern Republic of Armenia known as Urartu, was back above ground. How he died still remains a mystery, but the tomb that housed him for well over two and a half millennia certainly contains a host of information of his life and times. In addition to his tomb’s co-occupant, he was buried with an iron dagger, a small iron knife, an iron quiver with iron arrowhead, two bronze plaques the size of a pack of cards, probably attached to some kind of military uniform, a number of ceramic vessels, and what appeared to be a sacrificed lamb above both his and Rigo’s heads. From the wear on his teeth, he appeared to be in his mid 20s, with an estimated height, based on his femur and vertebrae, to be 175cm. As the on-site anthropologist on the archaeological team, my role is but one of many in uncovering the history of Armenia. These individuals were not just strangers reverting to dust, but ancestors of many of the people of the Trans-Caucasus, particularly Armenians.

The general location of our current excavation is known as Karmir Blur (Red Hill), and it’s a well known Iron Age site formerly called Teishebaini. It was named after the Urartian storm/thunder god Teisheba. Appropriately enough, the history of Karmir Blur is stormy indeed. Though there are ruins near the citadel that indicate settlement from the early Bronze Age, it was during the late Iron Age that Karmir Blur took on a strategic role in the region. It’s one of two large Iron Age settlements within the confines of the city of Yerevan. The specific site of our excavation is the ancient necropolis of Teishebaini, adjacent to the current Charbakh cemetery, and approximately a half kilometer SW of the Teishebaini citadel. Judging from the excavations of the tombs so far, they belong to the general population. Very little of the everyday life of the general population of the Urartian kingdom has been described, and this site is proving to be a treasure trove of history. Yet, being a heavily fortified and expansive city on the Eastern peripheral frontier of the Urartian Kingdom, the inhabitants of Teishebaini lead a hard and violent life. They were an agrarian people of a heavily militarized kingdom, often surrounded by hostile neighbors and marching toward an inevitable collapse. Within a century of its founding, Teishebaini lay in scorched ruins.

On another blazing sunny day, in another tomb, I found myself staring into the face of another skull, Dusty. She was resting on her base facing East, towards me, in a terribly degraded state. Unlike Ligo and Rigo’s well preserved skeletal remains, Dusty’s tomb was a rough place for immortality. She was one of 9 skulls, with nearly all of their bodies in a very confusing state of dismemberment. Using another scalar, one with a blunter end, I scraped as much of the soil as possible under Dusty’s base and prepared to extract her from her terrestrial matrix. Her particular section of the tomb was in a horrendous state of preservation, as ground water, or some other geological mechanism destroyed and degraded bone. It should be noted that nothing speaks of mortality like having a skull that crumbles in your hands. Dusty had reverted to dust, her shape and form forever gone. Yet, by excavating her skull, localizing her within the tomb, measuring, photographing, taking video, drawing, and describing her to the best of our abilities, her presence is not lost. Though she happened to be the literal face of mortality for me, she also represents a form of persistence. She may be dust now, but before giving way to the wind and dirt, she lives in our impressions of her.

The team at the site is actively looking for people to join their team. For those interested in volunteering at the excavation site, you can contact Armen Martirosian at [email protected]

This article has been updated with the following changes: the original version stated that there are “professional and volunteer archaeologists” – all the archaeologists at the site are professionals; also, one of the images from the site has been removed.

More from HistoryMore posts in History »