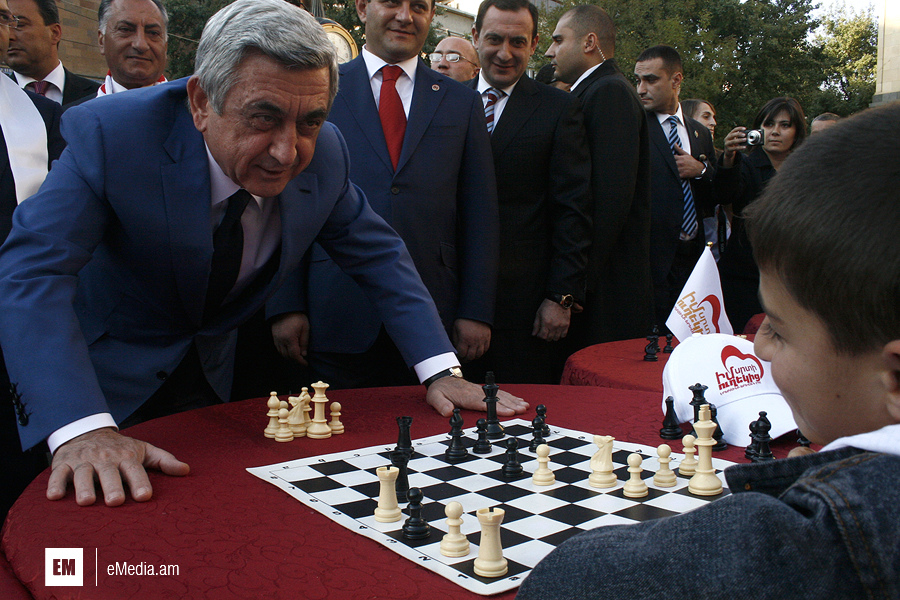 Checkmate: How Serzh Sargsyan Cornered His Foes – and Won

It would be in the best interest of the Armenia’s opposition to vote “Yes” on the upcoming referendum on the Armenian constitution. But, they are campaigning against the proposed reforms and it’s because President Serzh Sargsyan has put them in a pickle they can’t escape.

On December 6, Armenians will decide whether to accept constitutional reforms which would turn Armenia into a parliamentary republic. Whatever the result of the referendum, President Serzh Sargsyan wins.

The reforms are the result of an ad hoc commission created by Sargsyan to explore the possibility of reforming the constitution to change the current semi-presidential system to a parliamentary one. The proposed changes have led to nationwide campaigns for and against the reforms. Opponents have accused Sargsyan of making a move to circumvent presidential term limits and serve as prime minister, an assertion with no factual basis.

Actually, it was the opposition in Armenia which has called for a parliamentary system for years.  The current system vests a great deal of power in just one person: the president. That’s why it was surprising when President Sargsyan suddenly chose to propose a system of government which, in future elections, could lead to his Republican Party losing the power they now enjoy. The point that underlies the issue is that the current system is stacked in the Republican Party’s favor as the incumbent and a systemic change opens up the possibility for others to benefit, even if it’s not guaranteed. Presumably, this would be favorable for opposition groups.

In reality, reforming the Armenian constitution offers Sargsyan an opportunity to promote his own status and legacy while putting his foes in a pickle. Using their obsession with attacking him at every turn to his advantage, he placed a tempting offer on the table: would they look past their obstinate enmity toward him and accomplish, if imperfectly, their goal of changing a system which they hate or, would they scuttle their own ship for the sake of proving a point? They chose the latter – but why?

When he proposed the constitutional reforms, Sargsyan cornered his opponents: if they vote “Yes,” which is in their best interest, they support the proposal of their enemy, thus cementing his legacy as the leader who reformed Armenia’s government and further moved the country toward democracy; if they vote “No,” Sargsyan wins again because he can claim that his opponents support maintaining the same status quo which they have vitriolically lambasted throughout his tenure as president.

There isn’t much question that a parliamentary system itself is more conducive to promoting an equitable system of representation; that’s why it’s befuddling why the opposition would come out against it. Their evaluation of the the consequences of the reform, if it were to pass, seems painfully short-sighted and likely based on their current inability to form any viable coalition. If they were able to form such a coalition in the new system, they could conceivably unseat the Republican Party and appoint their own prime minister.

The main conclusion one can draw from the opposition’s decision is that nobody among them feels confident enough in their ability to unseat the Republican Party, even in a parliamentary system. The question is if they feel any more confident securing the power they seek in the current system. Based on their currently dismal state, it’s hard to see that they might. And this may be why the opposition is against the constitutional reforms: seeing no way to beat the Republican Party in the near future, opposing the referendum was the only choice that they had to save face and maintain a degree of relevance.

Ultimately, in order for the Republican Party to maintain the status quo, a system which has served them well and will likely continue to do so, they have to do nothing. And, paradoxically, the opposition is foregoing the one major opportunity they have had in years to shake up the system they have incessantly criticized.

Status quo or parliamentary system, “yes” or “no,” one person wins in either case. Checkmate, Sargsyan.