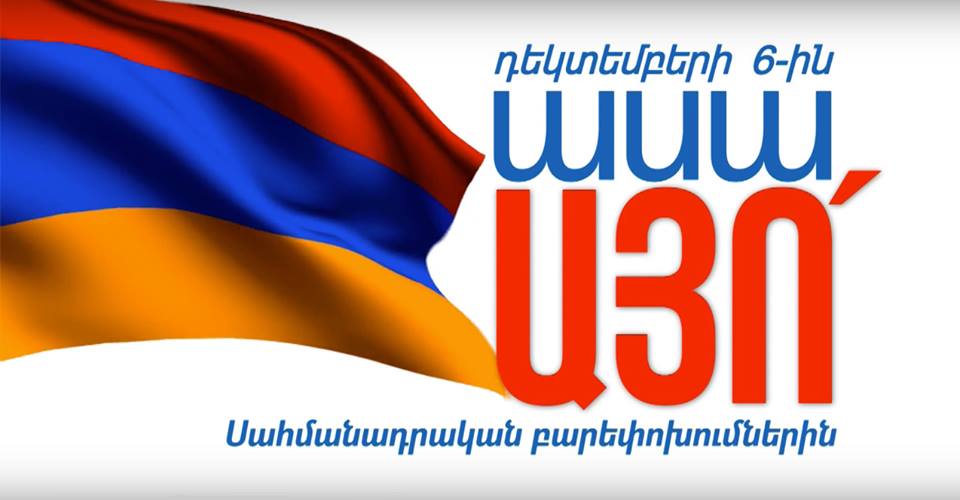 Yes or No? Why Armenian Democracy Would Benefit from Parliamentarism

This is the basic question on which Armenian voters will be deciding when they go to the polls on December 6. Specifically, Armenians will decide between implementing a new parliamentary system of government (“yes”), or retaining the semi-presidential system they have maintained since independence from the USSR in 1991 (“no”).

Why a parliamentary system?

Adopting a parliamentary government would give the Armenian people a more direct say in the political process.  In this system, the president would become a figurehead, while the prime minister and the government (or the cabinet of ministers) would hold the reigns of power.  Such a political system would help to break the monopoly of the ruling Republican Party’s power and give greater voices to independent candidates and other parties.  Not only will more voices be represented, but also governing parties would be expected to enter into coalitions and to share power more often than they have under the current semi-presidential system.

Armenian government officials contend that the reform will promote greater pluralism and checks-and-balances in Armenian democracy.  It will also make the political process more stable.  Specifically, Armenian officials cite previous episodes since independence in which angry oppositionists sought to bring political change by mass mobilization and revolutionary protest.  Instead, officials argue, the new constitutional reform will move this frustration from the streets and into the National Assembly.  “This [reform] is being done for one reason: he who doesn’t create a basis for peaceful regime change ends up facing violent regime change,” said Davit Harutyunyan, the chief of government staff.  In this respect, the reform will allow Armenia to become more politically mature and move away from a political culture where elites and frustrated citizens seek to enact change by revolution rather than by the ballot box.

Regional politics also demonstrates the success of parliamentary systems.  Currently, Armenia’s northern neighbor, Georgia, has a parliamentary form of government.  This system was conceived in 2010 under the administration of the controversial Mikheil Saakashvili.  Unlike in the Armenian case, the constitutional reforms necessary for transforming the system were decided by parliament, not directly by the voters.  The system was implemented in 2013, immediately after the electoral victory of Saakashvili’s opponent, billionaire Bidzina Ivanishvili, and the Georgian Dream party.  Ivanishvili spent only one year in office before stepping aside and delegating the premiership to the then-31-year-old Interior Minister Irakli Garibashvili, who has since proved himself an effective and capable leader.

During Ivanishvili’s time in office, Saakashvili remained the president.  The Georgian presidential election of 2013 changed this and the Ivanishvili-backed candidate, Giorgi Margvelashvili, won the presidency.  Initially, there was some difficulty in defining the powers between the president and the prime minister in Georgia’s new parliamentary system.  Margvelashvili, who holds the presidential office in high esteem, is not content with being a mere political figurehead and has instead attempted to mediate between Georgia’s competing political factions as a means of bolstering his position.

Aside from this, the parliamentary system in Georgia has largely been effective, efficient, and responsive, especially under the leadership of Prime Minister Garibashvili.  Overall, it has had a positive impact on the Georgian political process.  Indeed, Armenia’s President, Serzh Sargsyan, may have been impressed by the Georgian system because his initiation of the constitutional reform discussion began in September 2013, a year after Ivanishvili and his party came to office.

While Georgia may provide a good example for Armenia in terms of a successful adoption of a parliamentary system, the idea has received much less enthusiastic support in Azerbaijan.  Eager to disparage anything happening in Armenia, the government-controlled Azerbaijani media has decisively criticized the reforms and have contended that they are merely a means for the ruling elite to retain power.  This is ironic coming from an authoritarian government where human rights are regularly violated and free speech is regularly repressed.

The proposed move to transition from a presidential to a parliamentary system should also be viewed within the context of a greater series of institutional reforms implemented in Armenia under the presidency of Sargsyan.  Although Armenia has faced economic challenges due to the global financial crisis and the ongoing economic crisis in Russia, it has nonetheless made great strides toward reducing corruption and bureaucracy.  Armenian comedian Sergey Sargsyan (no relation to the president), a well-known critic of corruption in Armenia, noted these improvements in a recent interview.

The media environment is much freer today in Armenia than it was under the presidency of Robert Kocharyan, as illustrated by the presence of the satirical news program ArmComedy.  Additionally, the country boasts one of the healthiest and strongest civil societies in the entire former Soviet space.  Significant problems, such as unemployment and emigration, do remain.  However, the advances achieved over the past seven years are impressive and cannot be ignored.

The move toward a parliamentary republic would only further augment these advancements.  They represent Sargsyan actually giving away his authority, in a step akin to Mikhail Gorbachev willingly giving away his sweeping powers as the leader of Soviet Union during perestroika.  “The current constitutional reform is remarkable,” wrote political scientist Artak Galyan, “as President Serzh Sargsyan and the ruling Republican Party have initiated a process of constitutional change that could potentially put an end to their monopoly on power.”  The proposed reforms have been lauded by European observers, including the Venice Commission which praised it as a “further important step forward in the transition of Armenia towards democracy.”

However, not all Armenians see the benefits of adopting a parliamentary system.  A “No” movement has emerged, opposing any sort of transition to a parliamentary system.  There are indeed reasonable arguments to contest the adoption of the parliamentary system in Armenia.  However, the “No” campaign appeals more to the emotions of Armenian voters rather than strongly articulated arguments.  By casting the “yes” vote as a “vote for the establishment” and the “no” vote as a “vote for true democracy,” they are casting the referendum less as a debate on institutional reform and more as a referendum on the government’s legitimacy.

The “No” argument is compelling to a population that continues to experience corruption and unemployment and who do not see the immediate impact of Sargsyan’s reforms.  Often, “No” commercials prominently feature attractive young people, especially women, standing up against the reform.  People of other generations are represented as well, including elderly pensioners, giving the impression of a broad societal consensus in favor of the “No” movement.

“No” movement activists contend that the proposed reforms are merely a mechanism for Sargsyan to assume the new premiership and prolong his rule.  These objections echo those voiced in Georgia when that country first decided to switch to a parliamentary system in 2010.  Although the amendments passed overwhelmingly in parliament, critics maintained that then-Georgian President Saakashvili was using the reforms to prolong his rule.  However, unlike in the Armenian case, the concerns of Georgian critics were based on actual pronouncements by Saakashvili.  During the debate on the issue, Saakashvili explicitly announced that he would indeed seek the premiership if the reforms passed.  This is contrasted with Armenia’s Sargsyan who has stated repeatedly that he has no interest in the premiership and that he seeks to step down from political office after his second presidential term expires.

Some “No” activists go even further.  They see the issue as an opportunity to overthrow the government via mass mobilization, potentially looking to the earlier Rose and Orange Revolutions as romantic inspirations. They believe that a revolutionary overthrow of Sargsyan is the best means for achieving reform in Armenia, instead of a gradualist institutional approach.  Overall, while these groups are united on the object of overthrowing the Sargsyan government, none have clearly articulated what would follow.

Efforts have been made to de-emotionalize the issue and to present an even debate on both sides so that voters can make an informed and sound decision.  In this respect, political commentator Karen Kocharyan launched a television program in which representatives on both sides of the debate travel throughout Armenia to debate the issue.  The show, which premiered on November 13, is being broadcast by different Armenian TV networks for 20 days.

If passed by the voters, Armenia’s proposed constitutional reforms would give them a more direct say in the democratic process.  It would have major long-term benefits for the development of a truly pluralistic system in Armenia.

Still, the responsiveness of individual politicians will remain a matter of debate and the lingering influence of the oligarchy will continue to pose a challenge to the political process.  In this respect, Armenia would do well to closely observe processes underway in neighboring Georgia.  The Garibashvili government has sought to move Georgia more toward the direction of a social democratic system, in contrast to the more pro-market policies of the previous government of Mikheil Saakashvili.  If true democracy is to be realized in Armenia, then Yerevan too may consider a similar approach.  In this case, Sargsyan’s proposed parliamentary reform would merely be a first step toward making the political process more directly accessible to the Armenian people.

It is true that the government has amended Article 58 of the constitution on the right to strike, adding that strikes may be restricted to protect “public interests or the fundamental rights and freedoms of others.”  However, this should be understood in the context of the government’s fear of popular revolution rather than in a deliberate effort to stifle Armenian workers.  In general, the Sargsyan government is not pursuing the Armenian equivalent of the notorious Labor Code that Saakashvili introduced in Georgia in 2006, which directly attacked labor rights and openly violated the European Social Charter.

In fact, the text in the reform constitution guaranteeing social benefits may provide a blueprint for true social reform in Armenia.  It is clear that the social justice question cannot remain perpetually unanswered.  A social democratic model, with greater investment in social welfare and a balance between freedom and equality, would remedy this.  It would make Armenia into a genuine democracy, not beholden to an elite class but accessible to all Armenians.

At the same time, it is important to keep in mind that such reform can only occur gradually, through an evolutionary process that can be best expressed by the old Russian proverb, tishe yedesh, dalshe budesh (slow and steady wins the race).  Further, if reforms such as the proposed parliamentary system are successful in countries like Armenia and Georgia, then they can also positively influence other countries in the former Soviet region, including Russia.

That said, Armenian voters have a major decision to make on December 6.  They will chose between retaining the system of the past (“no”) and adopting a system of reform geared to the future (“yes”).  The choice is ultimately in the hands of the people, but a parliamentary system of government would definitely be a positive development for Armenian democracy.

Pietro A. Shakarian is a PhD Candidate in Russian History at The Ohio State University in Columbus. He earned his MA in Russian, East European, and Eurasian Studies at the University of Michigan in Ann Arbor. In addition to The Armenite, he has written analyses on Russia and the former USSR for The Nation, Russia Direct, and Hetq. He is also an Associate Editor at the Gomidas Institute.