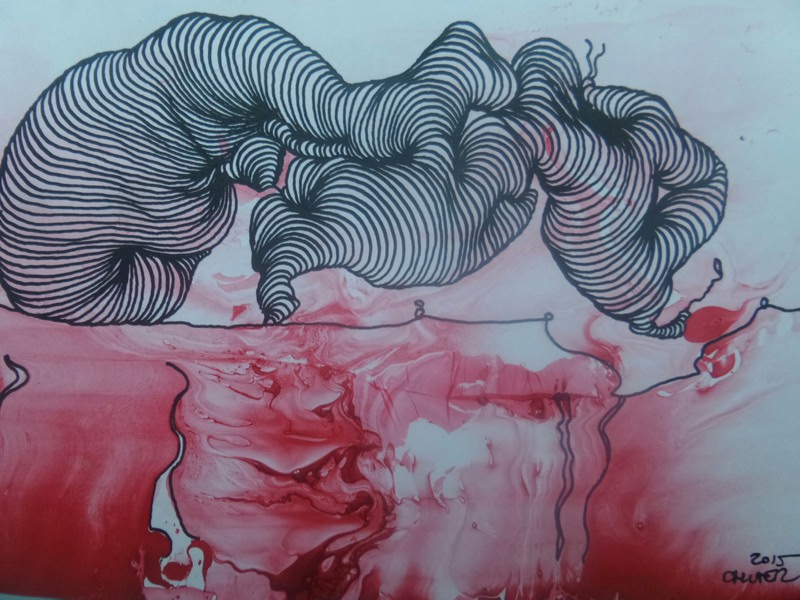 The Guru of Ebru

Have you ever stumbled upon a 300 year-old book with  hand-crafted binding and adorned with patterns that resemble marble stone? The tradition of applying marble patterns to various surfaces dates back to the Chinese T’ang Dynasty (618-907). Paper marbling techniques were famous in Iran and even Japan in the 12th century (Suminagashi, 墨 流 し, literally translated as floating ink). But for the Western world, this technique is known as the “Turkish marbled paper making,” or ebru art.

Robin Chuter, a business intelligence analyst and marketing specialist by profession, and a self-trained artist from the UK, considers himself to be a teacher, artist, music fanatic, and a cultural ambassador. He is also a practitioner of ebru art and one of the speakers at this year’s Hartak Festival. He considers his pen and other instruments to be weapons that bring unpredictable outcomes: “That’s the magic of art, you never know what can happen and what you can do.”

Of British and German origin, Chuter grew up in Belgium painting, drawing, and taking carpentry classes at school. He shares knowledge with a network of artists during DIY festivals, art fests, and workshops, Free Art Fridays, where artists create free art gifts for the public, and other events.

For the last 20 years, he’s been involved in an underground art branch called postal art. This is an international mail art project that transcended boundaries on both sides of the Iron Curtain starting from the 1970s. Artists communicate with each other by sending artwork; some unusual forms could be cheese or a frisbee in an adorned envelope. He recalls sending out a shoe himself. He used to draw record covers and send it over to other people, since he believes that art is about spreading rather than keeping to yourself.

Chuter doesn’t categorize himself in a specific area of interest and divides his life journey to three eras: nose, ear, and eye. He had an independent perfume and scented candle-making  project, organized concerts, and used to make record covers and sell them in the conceptual art network all over the world. Although he’s always been working with records, he dedicated himself to the art during the last three years.

He expresses himself  through mixed media ranging from ebru art to calligraphy, and collages. He even does stencils to help street artists, though he never actually does spraying. Some call his art obsessive art, others outsider art, ebru art or Japanese art, even psychedelic art. He considers it to be  interpretation art and he named it chuterism.

Music, energy that comes with creating something with a pen-weapon, nature, people and society are what inspire him. A variety of life of different cultures generate variety of ideas, so does Yerevan, where sunshine, people who  are not complaining, and culture inspire him. He just walks around without plans, visits Vernissage, and galleries and gets  ideas, the same happened with a stone and coat hangers, with ebru art and other elements on them, he showed during his workshop at the Institute of Contemporary Arts in Yerevan.

All he needs to create his fascinating record covers, is a trough of water, dyes, guar gum to keep the pigments on the surface, a swivel knife, a calligraphy pen, a microliner, and his imagination.

In his vinyl country series he has covered around 30 records from different parts of the world; the collection features vinyls  from Scotland, Wales, Zambia, Cape Verde, Colombia, Yugoslavia, and other least expected places. Armenian record features a 90s punk band, Nato, and he might also work on Charles Aznavour’s vinyl. Chuter’s goal is to cover records from every country of the world. But for now, Armenia is his muse. In Yerevan the environment, the sounds, the nature, and everything else give him energy and help to generate ideas and keep him working.

You can meet Robin Chuter and participate in his workshop at this year’s Hartak Festival.

Ruzanna Baldryan is a graduate of Malmö University, Sweden, and Yerevan State University, from which she holds degrees in political science.