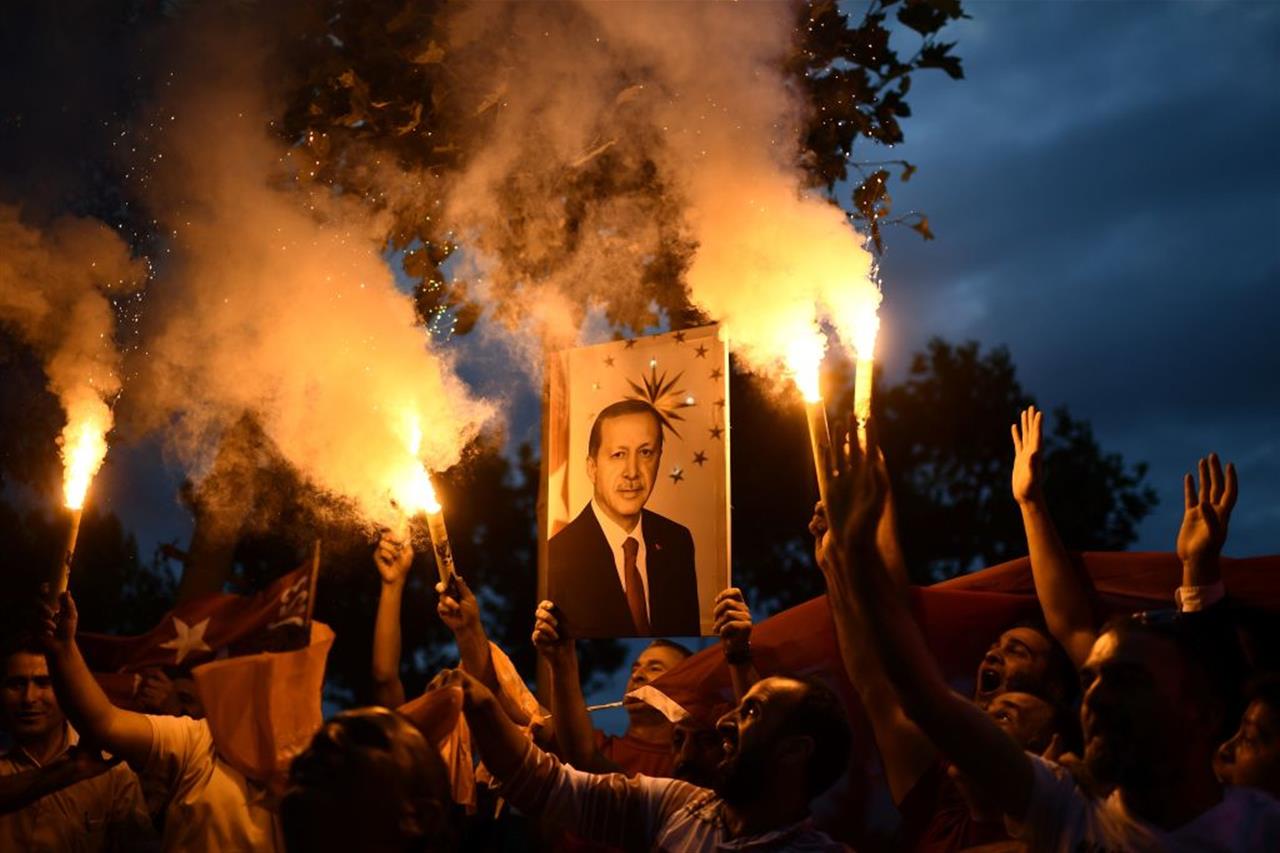 Turkish president Recep Tayyip Erdogan of the Justice and Development Party (AKP) was able to hold on to power, extending his fifteen year rule, as both him and his political party were able to come out victorious in the simultaneous presidential and parliamentary early elections that were held on June 24th.

With more than 99 percent of the vote counted, the center-right Islamist Erdogan was able to declare outright victory with 52.5 percent of vote, preventing a dangerous second round run-off against his main challenger Muharrem Ince of the secular, centrist, Kemalist Republican People’s Party (CHP), who received 30.7 percent of the vote. Ince had represented by far the most serious challenge to Erdogan since he had taken power in 2003.

The jailed Kurdish leader Selahattin Demirtaş of the Kurdish People’s Democratic Party (HDP) finished third with 8.4 percent of the vote, running his campaign from behind bars. And Meral Akşener of the iYi Party, a former Interior Minister and a defector from the main ultranationalist party, MHP, finished fourth with 7.3 percent.

Erdogan will have significantly increased powers as he starts his second presidential, and fifth overall, term as head of state thanks to a referendum which controversially and narrowly passed a year ago, transforming Turkey from a parliamentary system to a presidential system, abolishing the post of prime minister, while giving the president sweeping powers.

Overall the vote should be considered a victory for the Armenian state. While Erdogan holds no special affection for Armenia, his emphasis and pursuit of Pan-Islamism is much preferred to the Pan-Turkic nationalist ideology of CHP and in particular the MHP and iYi parties.

Throughout Erdogan’s leadership, there has been progressively less room made for Pan-Turkism. What this translates to is less support to and coordination with the secular, Shiite Azerbaijan, and less Turkish readiness to make sacrifices made against Armenia for the sake of Turkic brotherhood. One of the most prominent examples of this was Erdogan’s attempt to open the Turkish-Armenian border in 2009 despite fierce criticism from Azerbaijan, before being forced to step back due to domestic nationalist outcry.

Erdogan’s Pan-Islamist adventurism has also had important geopolitical implications for Armenia. In particular, his animosity toward Israel and his sympathy to the Palestinian cause has led to a severe deterioration in Turkish-Israeli relations which has all but ended the Turkish-Israeli-Azerbaijani axis. This, in turn, has essentially stopped the Israeli intervention in American – and by extension European – decision-making in favor of Turkey and, to a large extent, Azerbaijan. Moreover, it has led to improving Armenian-Israeli relations.

Finally, Erdogan’s intervention in the affairs of other nations in the name of Islamic solidarity, especially his support of extreme Islamists in Syria, has negated nearly all of the goodwill that his animosity against the US and Israel would have earned Turkey in the eyes of key Armenian allies, Iran and Russia.

Alternatively, had Muharrem Ince of CHP come out on top, Armenia would likely return to the days of stronger military and financial support of Azerbaijan by Turkey, while facing the full influence of Israel through western powers, due to dramatically improving Israeli-Turkish relations.

Moreover, Turkey would take greater steps in isolating and harming the Armenian economy through its various channels of influence, particularly Georgia. And in return, Armenia wouldn’t have seen any marked improvement in relations with Iran and Russia.

These consequences would have been even more severe had Meral Akşener of the iYi Party come out victorious, which seemed like a realistic possibility earlier in the campaign. She is a former member of the MHP, and her election would have led to even stronger supporter of Azerbaijan and stronger animosity against Armenia.

Also very important to note is the victory of the People’s Democratic Party (HDP), in spite of the best efforts of Erdogan and ultranationalist interests to neutralize the Kurdish party. The HDP was founded in 2012, and entered parliament in 2015. Despite facing a violent campaign of discrimination and abuse by the state and ultranationalists since its inception, it has managed to maintain its cohesion and organization, and stay in parliament.

It is the party of MP Garo Paylan, an ethnic Armenian, and it goes to great lengths to protect Armenian interests, and Armenian heritage in Western Armenia. The HDP is a thorn in the side of Erdogan, because besides being the first successful attempt of Turkish Kurds to unify and organize politically, most of the votes that it receives were going to Erdogan earlier in his career, who was seen by Kurds as a lesser evil in comparison to secular nationalists.

The only disappointments in the election is that AKP did not gain an outright majority in parliament and will have to form a coalition with extreme ultranationalist MHP, as well as the fact that with 10.0 percent of the vote iYi seem to have just cleared the minimum threshold to enter parliament.

Overall, the election produced the best results the Armenian state could have hoped for.