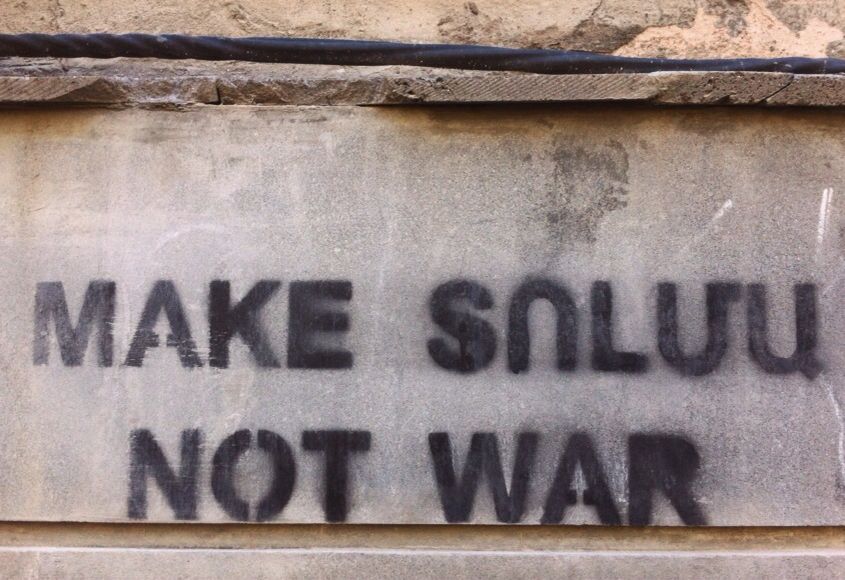 As part of the peacebuilding initiatives imposed on Armenia, a popular tactic is to promote the narrative of amicable coexistence. The standard formula tells stories of Turks or Azeris living alongside Armenians, falling in love (an especially popular trope), or going to “neutral” ground where the oppressive norms of their respective societies have little sway and, reveling in their freedom, eating dolma together. These caricatures are dangled as vignettes of a convivial future available to anyone willing to choose friendship over animosity.

A variation of this was recently published in a report on CivilNet about a visit to Tsopi village in Georgia, where ethnic Armenians and Azeris live side-by-side. Peacefully, of course.

CivilNet and its host organization, Civilitas Foundation, have experience in this area. As a beneficiary of funding from several foreign governments, as well as the Eurasia Partnership Foundation, Civilitas has participated in such projects as Support to the Armenia-Turkey Normalisation Process and has reported on Armenian and Azeri coexistence in Georgia before.

Except feel-good articles, videos, and similar gallimaufry are like sweet baklava for diabetics: superfluous and potentially dangerous. They debase the reality of those who are living under fire, trampling over their suffering in climbing to an imaginary moral high ground. This is why the quaint story of Armenians and Azeris (not Azerbaijanis, mind you) living peacefully in Tsopi is perfectly irrelevant.

The report sets the groundwork with trite moral equivalences that would make the OSCE Minsk Group proud:

“For 30 years, the media has informed the public about violations of the Nagorno-Karabakh ceasefire agreement, the death of soldiers and sabre-rattling on the Armenia-Azerbaijan border and line of contact. Given the situation, it is almost unthinkable that those two ethnnic [sic] groups might live in the same place as good neighbors. So, how do these ‘forever foes’ coexist in serenity?”

None of these are secrets, of course: Azerbaijan is and always has been the aggressor.

Azerbaijan was the one who initiated pogroms against Armenians in Baku and Sumgait; Azerbaijan ignored two democratic referendums calling for Artsakh’s independence; Azerbaijan launched the April War by invading Armenian territory, flagrantly discarding the ceasefire and leaving no doubt about its commitment to violence; Azerbaijan’s snipers shoot on border villages in the Tavush region, murdering villagers and killing livestock, setting homes and farms ablaze, and generally creating a climate of terror; Azerbaijan deceptively extradited and then deified one of its murderous soldiers who hacked an Armenian officer to death in Hungary with an axe; Azerbaijan has allowed hate to become so pervasive in its society that during the April War, Armenian villagers were murdered and their ears cut off as trophies. I could keep going.

But in reports like CivilNet’s, these are mere trifles worthy of nothing more than abstraction in the style of condescending foreign correspondents and authors who project their ignorance of the problem’s complexity and their laziness in understanding it by referring to the conflict as anachronistic tribalism (though even when economic incentive like a book deal or a position at a well-endowed think tank leads them to delve deeper into the facts, they are careful not to stray far from a position that suggests they are not an impartial observer – and thus available for all-expenses-paid trips to discuss the issue from any side in the conflict that will have them).

In this perverse approach to peacebuilding, a sober accounting of the facts is a nuisance we are asked to momentarily ignore so we can indulge in the humanity of an (not the) “other” who is close enough to confuse us into believing this should have currency in the opinions we form but which is incorrigibly irrelevant.

Nobody who has an inkling about history or is able to maintain a train of thought beyond the immediately visceral would deny that Armenians and Azerbaijanis can live together in peace. That is, even if my blood might boil when I see the outer wall of a working school in Berkaber, Tavush region, pockmarked by Azerbaijani sniper fire, I can intellectually understand that Armenians and Azerbaijanis can theoretically live together in peace. But, in light of the reason for my blood boiling, who gives a damn?

Armenians and Turks lived together for 750 years. Most Armenians spoke Turkish, they adopted Turkish customs in addition to the Armenian ones they maintained. They befriended Turks and lived alongside them. But, these stories are about as relevant to the extermination of the Armenians by the Turks from their historic homeland and the attendant movement for justice as is your previously semi-congenial neighbor one day coming over to your house, pouring gasoline on it while your family sleeps, and burning it to the ground. Does it really matter that he used to bring you over cookies for Christmas? He’s a psychopathic degenerate who needs to pay for his crime and neither talking about his previous good deeds nor the fact that both of you drink Coca-Cola nor the fact that his cousin and your cousin live on the next street over and get along great make a lick of difference in the fact that he came over and burnt your lovely house to the ground. And by talking about these other things, you are engaging in irrelevant distractions that serve only to dull the senses to the facts that must necessarily remain vivid so that meaningful reconciliation can occur and so lasting peace can prevail.

But ignoring reality and the facts that accompany it continues to be the preferred approach of peacebuilding narratives. The CivilNet report suggests as much: when asking the residents what they did during the April War in 2016, the one Azerbaijan initiated and the one where Armenian civilians were murdered in their homes, one of the residents responded, “We just did not talk to eachother [sic] about that.”