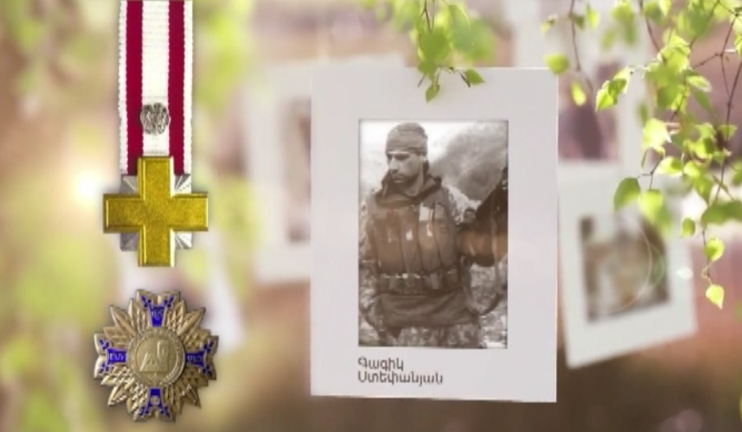 Gagik Stepanyan (Hetanos Gago) was born on this day in 1967. He would have turned 53.

His entire extended family, led by his great grandfather Nayib, escaped Surmalu upon Turkish invasion during the Turkish-Armenian War and settled in Abaran, where his paternal grandfather Stepan would participate in the historic victory at the Battle of Abaran, led by fellow Surmalu native General Dro Kanayan. His maternal grandfather, Beglar, reached Berlin during World War II, where he inscribed the name of Abaran on the wall of the bombarded Reichstag.

Given his ancestry, it was not a surprise that Gagik grew up to be a highly decorated boxer. Nor the fact that upon finishing service in the Soviet Armed Forces and landing in Yerevan, rather than going home, he directly went to join the Artsakh Movement rally. It was there that he gave a speech declaring that the attempt to erase and assimilate Armenian collective national memory and conscience has not succeeded, that Armenians are the rightful masters of the land through blood, and that the time of a national rebirth will soon arrive.

With Garegin Nzhdeh’s Tseghakron oath in mind, Gagik traveled to Garni to pledge his life to the Armenian national cause before joining his brothers Arayik and Bagrat in the rapidly escalating Artsakh War. From that point on, he would be known as Hetanos Gago.

Gagik Stepanyan’s first contribution in the fighting would come in April 1990 in Kapan. His brother Arayik, along with his friends, had managed to break into the Kapan Soviet base and steal weapons which they hoped to transfer over to the Armenian forces participating in border skirmishes. Unfortunately, their escape and retreat had led them to the steps of Mt. Khustup, surrounded by Soviet forces. However, just when all seemed lost, Gagik, driving an ambulance, managed to break through the Soviet line to rescue and extract Arayik and his friends.

For the next eighteen months, as the conflict continued to escalate further, along with Arayik and Bagrat, Gagik participated in the defense of Syunik border settlements, most notably Goris and Sisian. And when the Soviet Union finally collapsed under its own weight and the conflict turned into full fledged warfare, he joined the “Typhoon” special unit.

For the next two years the detachment would participate in some of the most critical battles of the war, most notably the liberation of Berdzor in May of 1992, and the liberation of Vorotan (Qobatlu) and Vardana (Fizuli) in the August of 1993, before finding themselves in the Amoor (Omar) Pass of the Karvachar region in the winter of 1994.

It was there that Azerbaijan, buoyed by the promise of rapidly approaching oil revenue, as well as the recent arrival of some 2,000 Afghani Mujahadeen, had decided to make its final attempt at annihilating Artsakh and ending the war on its terms.

With a desperate surge in conscription that included enlisting teenagers as young as 16 with little training, Azerbaijan hoped to overwhelm the Armenian defenses in Karvachar through sheer numbers, and from there to launch an attack on Berdzor, cutting off Artsakh’s lifeline to Armenia proper.

Initially the offensive met little resistance and Azerbaijan managed to capture the Amoor (Omar) Pass, an area that the forces of Monte Melkonian had liberated less than a year before. At the time it had been a major achievement for Armenia, both strategically and psychologically, as it had been the first time Armenian forces had advanced beyond the former borders of Soviet Karabakh. The victory would become the first in an unstoppable string of victories over six months which would see Armenians liberate all regions of Artsakh to the west and south of the former enclave.

Now, one year on, Azerbaijan hoped that its initial success meant that it could repeat that feat for itself. This was why Gagik Stepanyan and the members of the Typhoon detachment found themselves in the Karvachar region.

However, the rapid mobilization of Armenian reinforcement would soon bring the Azerbaijani offensive to a halt and push them back, as the members of the Typhoon detachment made their stand at the Amoor Pass.

It was during this stalemate that a seriously injured Gagik was convinced to visit home for his birthday on February 13, 1994. However, unsettled by the thought of those with less experience suffering without him, he could not be convinced to stay, and returned immediately the next day.

On March 13, 1994, Azerbaijan started a heavy offensive on the Amoor Pass. The enemy had an overwhelming advantage in numbers, but their lack of training, experience, and motivation rendered their numerical advantage meaningless in the unforgiving mountain terrain.

But on March 16th, heavy smoke and fog gave Azerbaijan the upper hand it needed as the Azerbaijani forces made heavy advances and outflanked the Armenian forces on either side. The Armenian forces, having lost radio contact as well as use of their machine gun, were nearly surrounded. Gagik, who was wounded in the struggle, decided to order everyone else to retreat while he provided cover.

Despite being alone and armed with one gun, he created the illusion of the presence of multiple fighters by constantly changing locations, and continued to defend the position to give his fellow soldiers time to retreat. Having single-handedly stopped the Azerbaijani fire and advance, he did not use the opportunity to retreat. Instead, he decided to stay to ensure that everyone else would escape safely. Eventually, having lost too much blood and being wounded a second time, he stopped firing. However, as the Azerbaijani soldiers surrounded his seemingly dead body, he pulled a grenade and took the Azerbaijani unit with him, including its commander.

On March 19th, his detachment managed to retake the lost positions, and found his body in the middle of many dead enemy combatants. On his finger they found the grenade pin. He was twenty seven years old. He would be posthumously awarded the Artsakh Battle Cross of the First Order.

The offensive would cost Azerbaijan 5,000 lives and would leave it without victory. In his book The Caucasus. An Introduction, Thomas De Waal labels the Karvachar Offensive the most deadly chapter of the war, and estimates that in the most costly single clash, Azerbaijan lost 1,500 men.