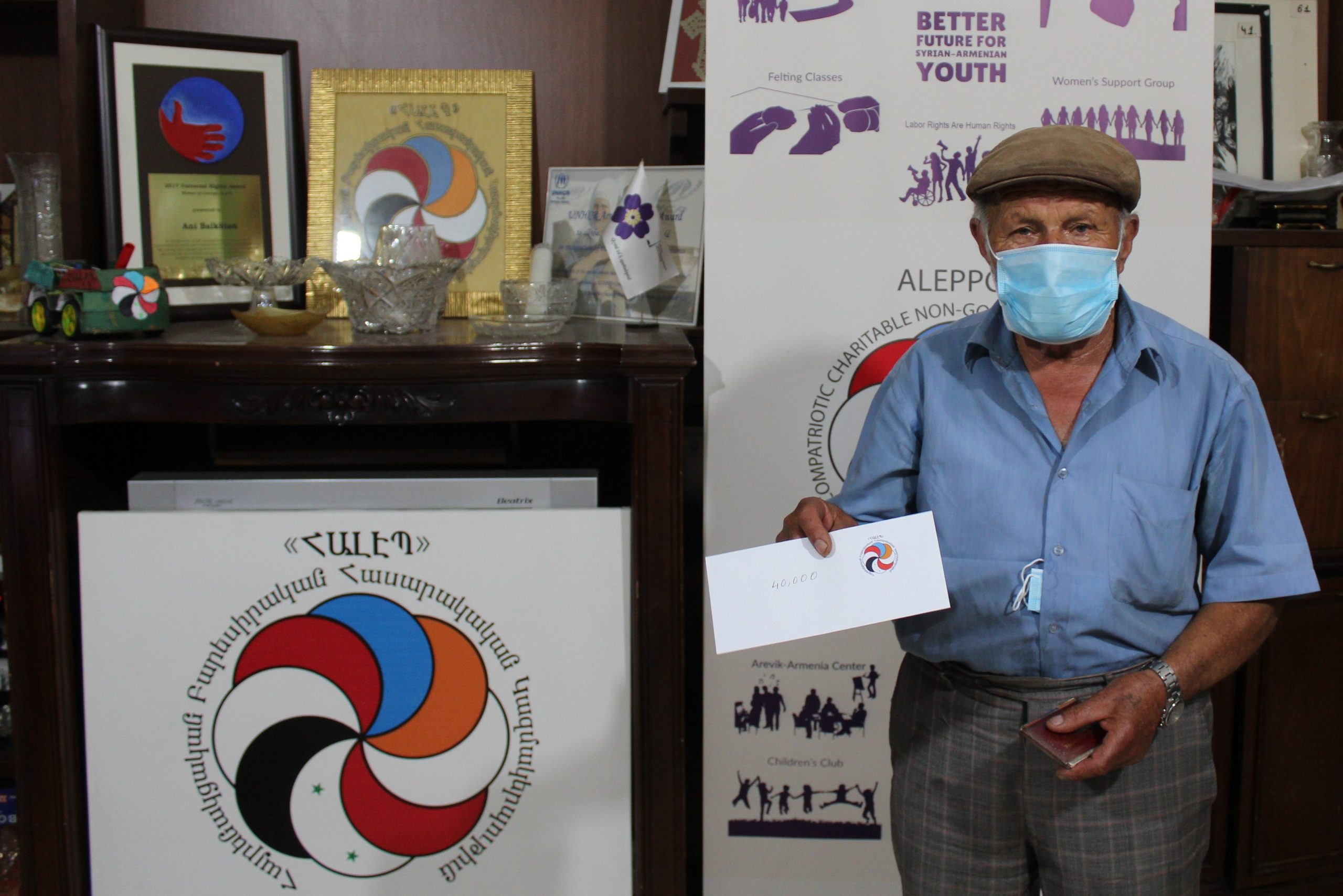 Abo of Lachin: The 83 Year-Old Veteran Headed to War to Defend the Future of Armenia

Earlier today, an 83-year-old veteran, who had served in the Armenian Armed Forces between 1992 and 1994, during the first Artsakh War, came to Aleppo Compatriotic Charitable Organization’s (Aleppo-NGO) office.

Unlike our other beneficiaries, who present their Syrian, Lebanese, Armenian or refugee passports or documents upon entering the office, Mr. Albert, nicknamed “Abo of Lachin,” presented his military service ID and booklet.

“Please have a seat and tell me how we may be able to help you,” I said.

“I came to your office a few weeks ago asking for financial aid to pay my electricity bill,” Albert replied after sitting down. “I don’t have electricity in my home…”

“But I no longer want money to pay my electricity bill,” Abo of Lachin continued. “I need money to go to the frontlines to fight alongside our soldiers.”

“Aren’t you too old to fight, Mr. Albert?,” I replied with a smile underneath the protective mask on my face. “Shouldn’t you let the fighting to young men like me?”

“My wife passed away a few years,” Abo responded. “Then my son, who had also served in the Artsakh War, passed away from lung cancer.”

“I have nothing to live for whereas our young men have their entire lives ahead of them,” Abo continued. “If by sacrificing my life I could save one Armenian soldier’s life, then I will! Besides, don’t pay too much attention to my age–I go hunting every day.”

I paused for a minute and then asked: “How much money do you need to go to Artsakh, to the frontlines?”

“15,000-20,000 AMD,” Abo responded. “I went to another organization earlier today and asked them for transportation money, they told me they can’t give me money to travel but offered me cognac and food instead. I refused to take their gifts, as I only want to go to the battlefield to fight against our enemies.”

As we were conversing, my colleague, Araks Martirosyan, walked into the office, which prompted Abo to say: “We cannot allow the Turks to lay a finger on our daughters, like her.”

When I insisted that we, young men, won’t allow the Turks to do so, Mr. Abo aggressively responded: “If you are not going to help, allow me to leave. I don’t want to waste my time, nor yours.”

I asked him to wait for a few minutes until I return with a response about our decision. He agreed to wait.

After a few minutes, I returned with an envelope carrying 40,000 AMD (approx. $80) and told him: “we can give you 40,000 AMD if you promise to use this money to pay your electricity bill and purchase food for yourself, not to travel to fight in Artsakh!”

“I appreciate your kind gesture but I can’t promise you that,” Abo responded. “If you expect me to tell you that I will use this money to pay my electricity bill, then you are asking me to lie and I’m not a liar.”

Abo refused to take the envelope carrying the cash, stood up and started walking toward the exit, leaving me no choice but to accept his terms.

After another 20-minute exchange, during which Abo kept insisting that he only needed 20,000AMD instead of the 40,000 AMD I had placed in the envelope, I finally convinced him to take the full amount by saying: “use the 20,000 AMD to travel to Artsakh and use the remaining 20,000 AMD to buy bullets to kill our enemies.”

“When I return from the war, I will come back to the office to return the 40,000 AMD,” Abo responded after reluctantly taking the money to go to war.

I smiled and replied: “You go kill as many Turks as you can and come back to our office to collect more money and pay your electricity bill.”

After he shared a few war stories I can’t share publicly, we exchanged numbers and I sent Abo, the 83-year-old Armenian hero, off to war.

In the past several days, the international community, including the OSCE, UN, and US State Department have put out several statements calling upon both parties – Azerbaijan and Armenia – to stop the fighting.

If the international community intends to play a constructive role in the resolution of the ongoing conflict, they need to distinguish between the widespread international humanitarian law violations (laws of war) perpetrated by Azerbaijan and their Syrian mercenaries and Abo’s right to defend his lands, to protect his women and children – indeed, every Armenian’s right to do so.

There is no moral equivalence in this conflict.

Armenians are fighting for their right to live while Azerbaijan is aspiring to complete the Genocide launched by the Young Turks in 1915 by finalizing the extermination of all Armenians.

But unlike 1915, we promise one thing to Azerbaijan, Turkey, and the international community: if we must die at the hands of Aliyev and Erdogan, we will do so by fighting as warriors like Abo and not as sheep sent to their slaughter.