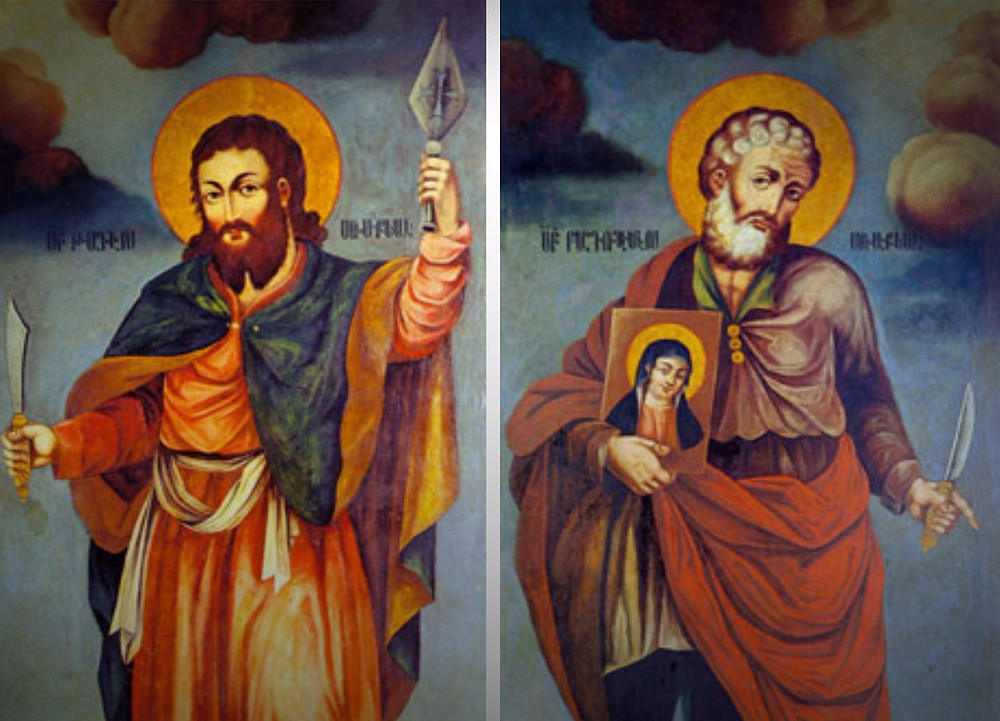 A Brief History of the Armenian Church

The origins of the Armenian Church date back to the period of apostolic evan­ge­li­za­tion. During the first centuries of Christianity, Armenia had close relations with the West where the new religion had spread. The influence of Syrian Christians came from the south. According to tradition, the founders of the Armenian Church were the apostles Thaddeus and Bartholomew, whose graves can be found in Armenia and are honored as holy shrines. A succession of Armenian bishops, whose names are remem­bered in manuscripts, lived in Armenia from the early evangelical period until the beginning of the fourth century, when the country officially accepted Christianity as the state religion.  Apart from this, numerous persecutions of Christians took place in Armenia when Christianity was an underground movement, particularly in the years 110 A.D, 250 A.D., and 387 A.D.

The Christian evangelization of Armenia continued during the fourth century with the great help of Greek and Assyrian evangelists. But the spreading of the Gospels faced obstacles because Armenians did not have their own alphabet. To overcome this problem, Mesrob Mashdots, an Armenian monk, invented the Armenian alphabet in 405 A.D. with the support of King Vramshabouh (ruled 389 – 417 AD) and Catholicos Sahag (sat on the patriarchal throne of St. Gregory from 387 till 428). During the next thirty years, the Bible was translated into Armenian from the Greek Septuagint (the primary Greek translation of the Old Testament by the seventy Jewish scholars). As well as the important writings of the Fathers of the Church. These translations successfully rival Latin and Greek renditions of the Holy Bible in their clarity and richness of language and precision of syntax. This Cultural Revolution resulted in a political uprising against the mighty Persian State led by Saint Vartan the Warrior. In the battle of Avarayr in 451, the Armenians defended their faith and secured their right to practice Christianity freely.

The Arab invasion of Armenia lasted from 640 A.D. to 885 A.D. In the next period (885-1045), an independent kingdom was established by the Pakraduni Dynasty and later the Roupinian Dynasty set up the independent Kingdom of Cilicia (1199-1375). From 1375 until the recent past, Armenian history was shaped by foreign rule in Armenia and in the other countries where Armenians immigrated to and settled.

Since the first days of Christianization, Armenians have followed the Church of Alexandria doctrinally and in ecclesiastical direction principally through the Cappadocian Fathers. Christologically, they have held the same doctrine as Saint Cyril and have professed the creed “One Nature of the Incarnate Word of God,” while at the same time anathematizing the teaching of Eutyches (first came to notice in 431 at the First Council of Ephesus for his vehement opposition to the teachings of Nestorius (disunion between the divine and human natures of Christ). His condemnation of Nestorianism as heresy led him to monophysitism, another extreme that describes the divine and human natures of Christ intermingled in one nature (mostly divine)). The Armenian Church teaches that Christ became a real and perfect Man in body, mind, and soul without ever ceasing to be God (miaphysitism). Of the Seven Ecumenical Councils, the Armenian Church has accepted the decisions of the first three (Nicaea in 325, Constantinople in 381, and Ephesus in 431), rejected the fourth and has refrained from pronouncement relating to the subsequent councils. The Armenian Church accepts the infallibility of the Church in the Ecumenical Councils. The Armenian Church’s teachings on sacraments and church order do not differ from the other Orthodox Churches.