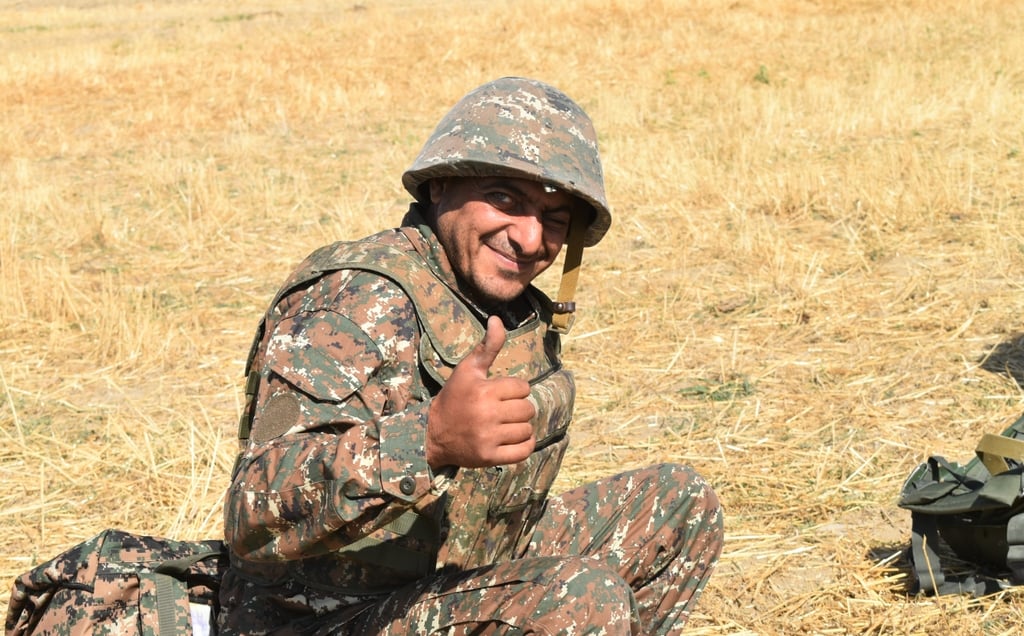 A View into Two Weeks and 10 Hours: The Artsakh War 2020 Ceasefire

Why did it take over 10 hours? The simplicity of this agreement wouldn’t itself have taken this much time to agree to, which suggests that there were other bones of contention that didn’t make it into the final product. Let’s take a quick look at what’s not in the agreement.

My guess is that the biggest issue pushed by Azerbaijan was including Turkey in the process as a co-chair. This was clearly a goal of Turkey’s before the war started and neither Azerbaijan nor Turkey made any secret about their love affair throughout the war. This would be unacceptable to Armenia and Artsakh, not least because of Turkey’s outsized role in this extremely violent war launched by it and Azerbaijan. Russia would have also been opposed in all likelihood because Turkey’s inclusion would indicate regional power sharing with no direct benefit: that is, Russia would invite another player to the table for a problem in its backyard with little to gain.

The fact that Turkey is not a co-chair as a result of these negotiations is a huge victory for Armenia and Artsakh.

Nevertheless, it is important to remember that since the format of the Minsk Group has not changed, as announced by Russian FM Lavrov, this means that Turkey is still a member of the Minsk Group and will be party to the negotiations.

Azerbaijan undoubtedly pushed for the removal of Armenian troops from Artsakh, something both it and Turkey have been saying for weeks. A ridiculous proposition given the history and inhumane bombardment of civilians during the war. They got no such removal and Armenian troops will remain.

Another important point is that there was no time designated for the ceasfire. That is, it’s indefinite. This means that, in principle, the situation should return to what it was before the war began. It will also test how committed Azerbaijan is to the peace process as the blatantly obvious aggressor who ignored the last ceasefire and launched attacks with its ally in Turkey.

All in all, the return to the status quo is a massive failure for Azerbaijan and its partner Turkey. That, after spending billions of dollars on the Azerbaijani Army, launching a massive offensive, losing billions of dollars of equipment, and thousands upon thousands of lives, we are returning to almost exactly where we started. Azerbaijan and Turkey’s ability to achieve any substantive victories are going to be a tough sell for their populations, especially Azerbaijan’s, as body bags start coming home. Armenia’s chief diplomat deserves credit here.

This does not make the agreement good, necessarily. A ceasefire is not a peace treaty. Stepanakert has been significantly damaged, as we’ve seen, as have many other areas of Artsakh. Azerbaijan, as it has done in the past and as many of knew it would, will again prepare for war soon after the dust settles, assuming it doesn’t decide to break the ceasefire before then. The question, then, becomes how much more prepared will Armenians be for the next attack, which will surely come.

Will Armenian society continue buying into a peace process which brings them war every few years and puts them at a disadvantage every time or will they expend their efforts on even greater preparations to defend themselves and their land? Despite reminders by some of us, Armenians may have forgotten the brutality of the Turk but they were reminded of it in the worst way in real-time. The relentless bombardment of civilians, the destruction of our cultural monuments, and the needless deaths of so many young soldiers reminded new generations of our Nation across the world of the savage nature of our enemy.

It should also be a moment to reflect on the one thing that defend the Armenian Nation and all of its component parts: the military. It was our army, its commanders, and its soldiers who defended the right for Armenians to exist with their lives. This should not be lost on anyone. Nobody , not a single Armenian, said they wanted war but every single soldier said, in no uncertain words, that they were willing to fight and die without hesitation – and many did.

So, after this victory in defending our homeland and our people alongside the tragedies rained upon our compatriots, our homes, and our churches, I can only hope that our Nation once again learned and will forever remember that timeless ancient wisdom: si vis pacem, para bellum.