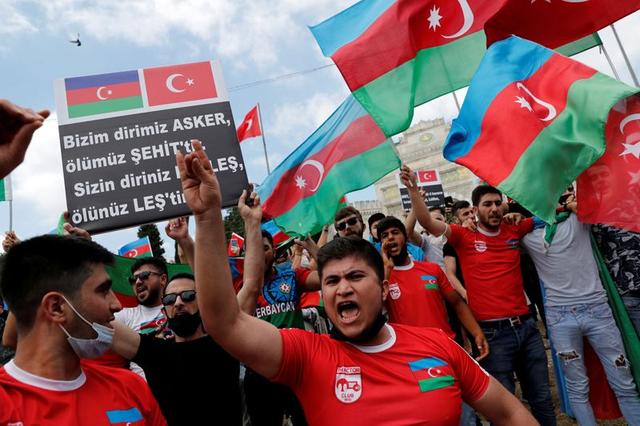 Threats, Treason, and Truculence: The Turkish-Azerbaijani Reaction to the Ceasefire

News that Armenia and Azerbaijan had come to an agreement about a ceasefire over the 2020 Artsakh War were not welcomed among Turks and Azerbaijanis, who took to Twitter to voice their anger. It is worth noting that Twitter is the only social media outlet that is accessible in Azerbaijan and it is a popular platform for Turks, as well.

Many accused both Azerbaijan’s dictator, Ilham Aliyev, and his recently appointed foreign minister, Jeyhun Bayramov, of treason and threatened them for giving up fighting in Artsakh (Nagorno-Karabakh).

Here is a selection of translated tweets about the ceasefire (screenshots below):

“Keep your promise!…History will not forgive you if you give up, Aliyev.”

“Ilham Aliyev is the son of the Russian agent Heydar Aliyev.”

“If you remember, the betrayal of the Aliyev family is always talked about.”

“Aliyev, who signed a strategic ceasefire, is a traitor.”

“There is a serious reaction to Bayramov, especially in the first place I see in WhatsApp…I think Bayramov should not hurry to return to Azerbaijan. Take a 1 or 2-day vacation in Russia.”

The tweets are also an indication of the widespread and growing discord in Azerbaijani and Turkish society regarding the Karabakh issue, which Aliyev has used as a political carrot and stick to keep his country’s population living in considerable poverty despite the country’s fabulous oil wealth.

It seems Aliyev is fast becoming a victim of the delusions he himself created by raising expectations that Azerbaijan would be able to take Karabakh in a glorious war, which he has been unable to deliver. Even after launching this war on Artsakh and Armenia, he has claimed that Azerbaijan “liberated” vast swaths of land which was plainly false, as Armenian sources have continuously proven.

Unable to deliver on any of his promises, Aliyev has become increasingly desperate, bombarding the civilian population of Artsakh and Armenia and causing damage to infrastructure in Stepanakert.