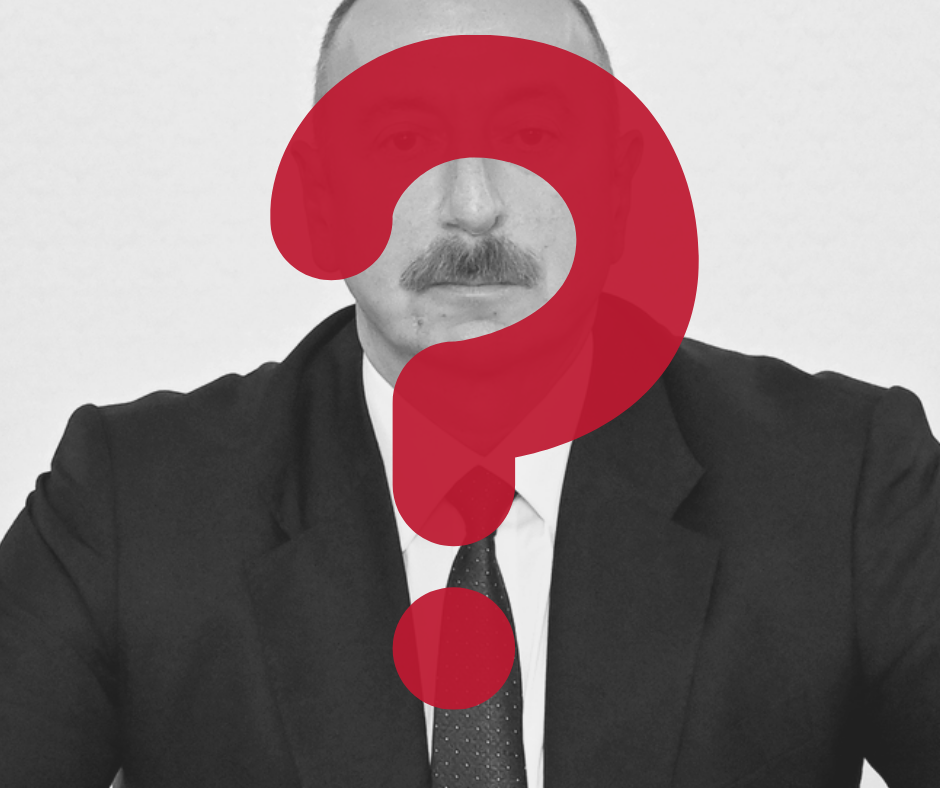 Where is Ilham Aliyev?

While he has appeared in interviews with foreign journalists and in pre-recorded addresses to the country, Ilham Aliyev has been conspicuously absent from any uncontrolled setting since he and Turkish president Recep Tayyip Erdogan launched their war on Artsakh and Armenia on September 27, 2020.

By contrast, Artsakh’s president, Arayik Harutyunyan, has been anything but secluded. In the first days of the war, he was seen going from place to place and meeting with top military brass. In a move unusual in modern times, he went to the frontline to join his soldiers and stand beside, staying overnight. He has visited hospitals, towns, and military detachments, and offered press conferences to domestic and foreign journalists with unscripted Q&As.

The contrast between Harutyunyan and Aliyev is stark but also indicative of the psychologies of the two leaders. Harutyunyan’s free movement among every sector of the population, including armed soldiers, suggests total confidence in the people surrounding him.

By contrast, Aliyev is clearly afraid that a public appearance among his people carries the possibility of engendering anger and protest. Even more worrisome for Aliyev is appearing among his own armed soldiers: it would not take many of them, along with a disgruntled commander or two, to quickly dispose of Aliyev. So, it makes much more sense for him to hide behind highly-paid and well taken care of bodyguards in one of his many palaces. No appearances with the public, no appearances with the military.

These concerns for Aliyev cannot be far-fetched. The Artsakh (Nagorno-Karabakh) issue is a sensitive one in Azerbaijan, not least because of the vitriolic rhetoric created and distributed by his own government to appease hard-liners throughout the country. The issue has also been a linchpin of the rise and fall of Azerbaijani leaders since independence. Aliyev understands this all too well but, in increasing expectations about regaining Artsakh militarily to both justify suppression of opposition groups and to satiate ultra-nationalists, he has backed himself into a corner.

The internal instability of Azerbaijan is seldom discussed because it is a closed society with domestic dissent stifled and expelled. However, the Aliyev family, which runs the country – Ilham’s wife, Mehriban, is the vice president of Azerbaijan, and other family members hold high-ranking positions – maintains a tenuous hold on power. It is no secret that the Aliyevs have used the country’s oil wealth to enrich themselves and it is hard to be blind to the poverty of regular citizens in urban shantytowns and destitute villages while the Aliyevs tour the capitals of Europe and the Middle East.

Mere weeks before Aliyev and his closest ally Turkey launched war on Artsakh, these internal power struggles had bubbled up to the surface. An alleged coup d’etat and public spats with Rahmiz Mehdiyev, Abdin Farzaliyev, Gurban Mammadov, Ali Hasanov, and other former high-ranking officials were coming to the fore. In late August of this year, Mehdiyev wrote a long piece lambasting the actors within Azerbaijan for losing the information war against Armenians.

In the shadow of these serious challenges to his power from powerful political actors with long histories among the country’s political elite and deep connections within the military establishment, Aliyev launched a full-scale war – and largely disappeared from the public eye.

Aliyev’s almost total absence and seclusion in secure compounds in unknown locations suggests that he is indeed concerned for his safety, especially as it becomes more and more clear that he is unable to deliver on his promises regarding Artsakh. It is safer for him to keep himself surrounded by those he considers trusted advisers until any subversive elements can be detained and neutralized. This is a common tactic in the authoritarian’s playbook but it is unsustainable.

While riots and popular discord must be a worry, internecine battles are also a running theme in dictatorships and the longer they go, the larger the circle of enemies gets as the circle of trusted advisers gets smaller.

All signs point to the circle closing in on Aliyev. The frequency of violent aggression against Armenians over the past four years has been incomparably greater than anything since the ceasefire was originally signed in 1994.

But beyond just creating a distraction for obvious problems at home, at this point Aliyev has dug himself in deep with the scale of the war and the promises that he has made to “liberate” Artsakh once and for all. He realizes that he must deliver on what he has promised for decades and that which he has sent thousands of young men to die.

Despite his announcements, he is not succeeding: he said he was going to be in Hadrut but cancelled any such plans because the Azerbaijani soldiers were not in Hadrut. He continues to say this, despite ample evidence that Azerbaijan has not been able to take Hadrut. This also indicates that his inner circle may be lying to him to appease him, another problem that has led to the downfall of many authoritarians who cultivate an environment of fear among subordinates who dare not displease their boss for fear of reprisals. While some authoritarians like Stalin might have been able to withstand popular uprising through violent repression, Azerbaijan is neither large enough nor is Aliyev’s grip on power strong enough to allow for a widespread crackdown once the artifice is violated.

How will Azerbaijanis react when the bodies of their children start arriving home by the thousands? What about when they find out they have been left to rot on the battlefield? Will they protest? Will Aliyev’s enemies take advantage of their opportunity to seize power? It is impossible to know. But one thing is clear: Aliyev is not taking any chances and is staying as far away as he can from the lurking danger.