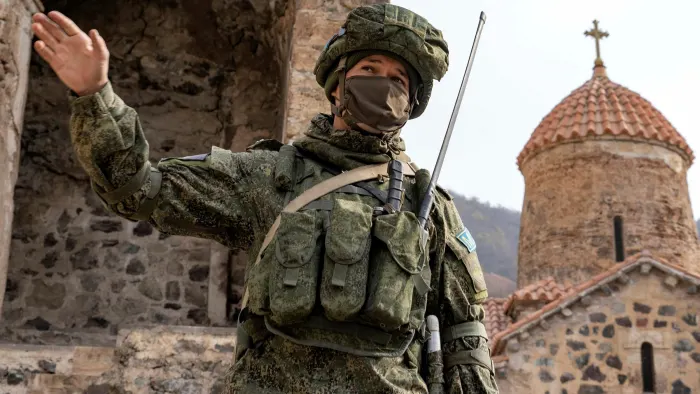 An Unequal Relationship: Armenia and Russia

When Armenians ask me what relationship I think Armenia needs to have with Russia, I answer with a variation of the following:

The distance from Armenia’s northern border to Russia’s southern border is about 100 miles, which is about the same distance as from Los Angeles to San Diego.

You get the point.

During the past decade, people within Armenia – locals, Diasporans who moved there, or foreigners living in the country – worked diligently, funded by foreign money, to convince Armenia’s population and government to shift Armenia away from Russia and toward Europe and, more generally, the West. Many of these people currently serve or previously served in Traitor Nikol Pashinyan’s government.

For years, they did anything and everything to sell Armenians on the idea of the Russian boogeyman, despite the fact that Russia was our biggest trading partner, our main supplier of arms by a mile, and the source of most of our foreign direct investment.

The framing of the issues was that Armenia was selling off its sovereignty to Russia. The commonly used example was the sale of strategic assets like the energy network and gas distribution system to Russia. This, of course, was without concern for the counterfactual question: who else was going to buy, refurbish, and operate an aging gas and energy distribution system of an impoverished country with an impoverished customer base? There was never any answer because there was no one.

What’s more, Russia, which controls the gas supply and distribution networks of most of eastern Europe, was supposed to be replaced in Armenia by Iran, according to the ridiculous idealists who would prefer to exchange the relationship with one of the most powerful countries in the world with one of the world’s greatest pariahs, thus threatening the well-being of the country just to say they were “free” of Russia. Or perhaps it was Azerbaijani gas they wanted? One step closer, it seems.

Once Traitor Nikol came to power, he wasted no time spitting in Russia’s face in every way possible. He appointed an anti-Russian CivilNet columnist and activist Armen Grigoryan as the secretary of the National Security Council, one of the highest civilian positions that has to deal with the Russian military and security services; he recalled Artsakh Hero Yuri Khachaturov from the Russian-led CSTO and arrested him without informing Russia; and, he appointed known anti-Russian activists to minister and deputy minister positions whose previous years’ work was significantly informed by anti-Russian activities. These are people who organized and participated in anti-Russia protests, made anti-Russia placards, wrote anti-Russia articles, gave anti-Russia interviews.

Superpowers have long memories. They watch, they wait, they know a time will come. And this isn’t Russia’s first rodeo.

War came. Russia was…reserved. Then, Russia stepped in. It saved Armenia – but at great cost.

Now, and don’t delude yourselves, whatever is left of Artsakh is a Russian protectorate.

We as Armenians have idealistic fantasies of what and where we are. Western-minded Armenians from Armenia and the Diaspora have an especially hard time understanding or refuse to accept the realities of Armenia’s relationship with Russia and what it needs to be.

An Armenian from America – and his/her acolytes in Armenia – doesn’t look at the Armenia-Russia relationship as an Armenian from Armenia but as an American. They can’t understand – or, don’t want to understand – that Armenia is and must be dependent on Russia. The American parallel would be to look at the Armenia-Russia relationship not as one would the America-Russia relationship but as the relationship between Cuba and the United States. We, as Armenians, are not America, we’re Cuba. In fact, we’re in a much worse place than Cuba, which is an island and has no immediate enemies. Nevertheless, when Cuba decided that it was going to try to remove itself from the American yoke 60 (!) years ago, America made it pay a dear price – and continues to do so to this day. You know why? Because America rules that roost; the Western Hemisphere is America’s neighborhood. You may not like it but international politics and guns don’t care about what you like and don’t like and what you learned in your human rights class at UCLA.

Yes, you can continue to live in the fantasyland of your textbook democracy and independence and sovereignty or you can enter the real world and understand that Armenia has an issue with surviving as an entity and the only country with the resources and a modicum of willingness to help in the ways that we need help is Russia. Nobody else. If it wasn’t clear before, it should be clear now. We’ll see.

So, those people protesting Russia all those years, those Traitor Nikol officials and supporters who were groveling on their knees for Russia’s help during the war but who have hardly made a peep about their past indiscretions or issued apologies for bringing Armenia to the brink of extinction through their anti-Russia adventurism over the past decade, not only didn’t get what they wanted – the removal of Russia from the Armenian homeland – they ushered the Russians in. Whatever is left of Artsakh is no longer sovereign, it exists at the pleasure of Russia. It exists because Russia protects it, not Armenia, which refused to protect it under Traitor Nikol’s rule (yet he continues to rule).

We can learn to manage the relationship with Russia well, as was done in the past, and be able to maintain our sovereignty, which is what I and others have argued for years, or we can pretend that Russia isn’t there and suffer greater consequences because of it. The choice isn’t between submission and submission, the choice is between reality and fantasy.

If we as a people are not honest about the geopolitical reality of Armenia, we will continue to threaten its existence and our very existence as a people. This choice, at least, is ours.