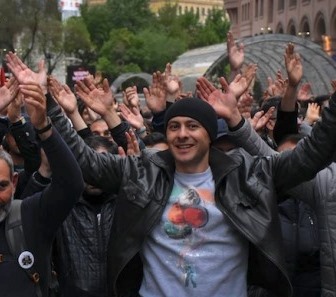 The guy in the beanie doing the “dmp-dmp-ho” gesture popularized during Traitor Nikol’s protests is Armen Grigoryan. His work experience prior to the revolution was being a full-time activist. He worked for Transparency International (funded by Open Society Foundations/Soros, National Endowment for Democracy, the EU, and others). He was also a columnist for foreign-funded CivilNet. He never served in the intelligence services, he was just a professional activist. He is now Secretary of the Security Council of Armenia, the highest-level defense and security body in the country.

The guy in the suit is Nikolai Patrushev. He is a lifelong former KGB officer and was Director of the FSB, the successor of the KGB. Since 2008, he has been Secretary of the Security Council of Russia.

These two men are colleagues.

Grigoryan was appointed to his position in 2018 after being an organizer of the protests to oust Serzh Sargsyan.

When I and others talk about relations with Russia being ruined because of Traitor Nikol’s appointments, this is yet another example. Armenia and Russia have intelligence-sharing agreements that were procured in the pre-Nikol years through good relations with the Russian government. This is incredibly significant because, as one might guess, even if they’re unaware of the details, Russia has one of the most powerful intelligence services in the world with extensive capabilities. One might also guess that these intelligence services had quite an extensive file on people in Armenia who were working to undermine Russia there and who were on foreign payrolls.

Now, when you appoint a person who has zero experience in the intelligence world and, as if that isn’t enough, he owes his career to foreign funding that has been hellbent on destroying Russia’s reputation from Armenia to Ukraine to Georgia to Russia itself, you can begin to see why Russia may not have been thrilled to see Grigoryan appointed to his post. You may understand why Patrushev wasn’t ready to divulge state secrets to his counterpart in Armenia. You may begin to see how with nearly every move since coming to power, Nikol Pashinyan has tried to dismantle Armenia’s institutions, weaking the country, and leaving it vulnerable to attack.

None of this was a surprise, it only took a war and losing a good part of our homeland for people to wake up. Just as Rome wasn’t built in a day, it wasn’t destroyed in a day, either.

Published in Politics and Treason and Tragedy