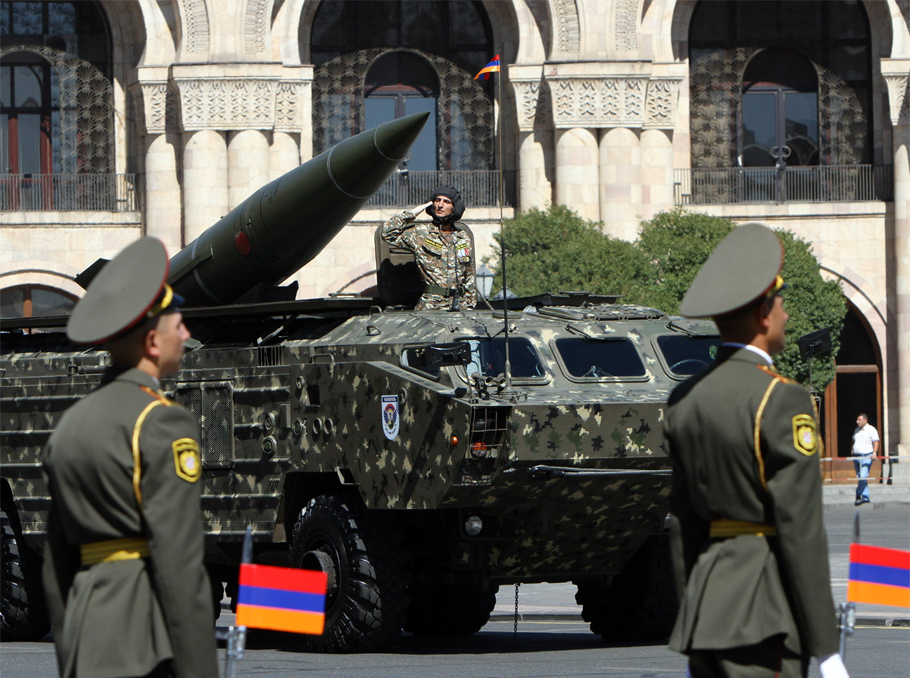 Myths about Defense Spending in Armenia

Defense spending in Armenia has recently been a topic of many discussions, particularly considering the outcome of the recent war in Artsakh and the declaration of total capitulation signed by Nikol Pashinyan. Apologists for the Pashinyan government are looking for scapegoats for the disastrous outcome and are actively spreading propaganda to deflect blame. This unwillingness to take responsibility is characteristic of the Pashinyan administration and is accompanied by an extensive manipulation of facts for the purpose of crafting an alternative truth.

The narrative that the Pashinyan propaganda machine is trying to push is that the previous administration neglected the military. The rhetoric is meant to create the perception that Pashinyan and his team started from scratch and, though they did the best they could, the country was beyond saving. This claim is obviously false and can easily be disproved by a few minutes of researching Armenian budget allocations over the years. However, the propagandists prey on the segment of our society that is uninformed and naive. They rely on people accepting the disseminated information as fact, without spending time to independently verify the numbers or arguments being presented. And the propaganda spreads like wildfire, creating an alternate reality that, through repetition and confirmation bias, becomes a new baseline truth. At some point, people no longer question this information or feel the need to cite the source, because it’s accepted as common knowledge.

Since the war ended, the Pashinyan propaganda machine and its satellites have been circulating two manipulative graphics on social media. The first chart purportedly shows a decline in defense spending during Serzh Sargsyan’s presidency, which spanned the period from 2008 to 2018. The author of the chart draws the attention of the reader to the column labeled Defense, where the values for 2011 through 2015, highlighted in red for emphasis, are zero Armenian Dram. What the chart does not show is that these numbers are taken from the budget for the Republic of Artsakh only. Since almost the entirety of our defense spending comes from the Republic of Armenia, the defense spending shown in the chart does not prove anything. This is also apparent when looking at the numbers in the Defense column. For example, the 2020 amount is 250 million AMD, which is a little over 500 thousand USD. Needless to say, you can’t buy much weaponry with that amount, so it couldn’t possibly be indicative of Armenia’s actual defense spending. But the zeros highlighted in red and the accompanying commentary demonizing previous leaders serve as a powerful visual and emotional one-two punch.

Out of curiosity, I looked at the budget reports for 2011-2015 and noticed that the Defense spending category was missing altogether, most likely due to a change in accounting methodology.

The second visual that appeared on social media is a graph showing military expenditures for the Republic of Armenia. It is taken from the Trading Economics website, which draws its numbers from the SIPRI database. The graph only shows defense spending for the period between 2010 and 2018, so the y-axis is shifted to save space vertically. A user on social media interpreted the resulting visual effect as showing that defense spending had doubled (i.e., increased by one-hundred percent) in 2018, where the numbers clearly show only a thirty-three percent increase.

This isn’t even the worst of it. The graph is presented as an argument that previous leaders were not spending enough on the military and that the Pashinyan government turned that around by doubling military spending in 2018. However, Pashinyan was voted in as Prime Minister by the National Assembly on May 8, 2018, meaning he had nothing to do with forming the 2018 budget. The budget was composed in 2017, when Serzh Sargsyan was President, Karen Karapetyan was Prime Minister, and Vigen Sargsyan was Defense Minister, and was passed by the Republican-majority parliament. In fact, Pashinyan’s Way Out faction voted against the finalized budget on December 8, 2017. This is not surprising since a lot of pacifist NGOs and media closely associated with the Pashinyan administration have for years used dangerous rhetoric that described Armenia as having been too militarized, with not enough money being allocated to economic and social development, a claim that couldn’t be further from the truth given Armenia’s security concerns.

Prior to 2018, security has always been the top priority of successive Armenian governments. In order to properly quantify this, it is not sufficient to look at the absolute dollar amount allocated to the defense budget. That is an important element, but doesn’t provide the full picture. First of all, we have to look at defense spending as a percentage of total government expenditures. For instance, in absolute numbers, Azerbaijan has spent nearly six times as much on its military in the past decade or so, but military spending as a percentage of total spending (11% in 2018) has historically been considerably lower than in Armenia (21% in 2018). The global average is 6-7% and there are only a handful of countries that top Armenia in this metric. In the post-Soviet space, the only country that spends more of its budget on its military is Belarus (31%).

In 2017, the Finance Ministry announced that the Sargsyan’s government intended to continue increasing defense spending at a rapid pace over the next several years. In particular, the plan was to add 26-27 billion AMD per year, with the goal of reaching but not exceeding four percent of GDP in 2020. The large spike in military spending in 2019 (26%), likely proposed by Pashinyan to put everyone in the security apparatus at ease, was mostly negated by less than one percent increases in 2020 and the proposed budget for 2021. The effective outcome is in line with the projection of the Finance Ministry in 2017.

To complement the defense budget, Armenian leaders have consistently worked to strengthen its military-political alliance with Russia in order to further its security objectives. In 2015, Armenia received a $200 million loan from Russia with privileged terms for repayment. The loan was used to further modernize Armenia’s military, with vital equipment being delivered in 2016 and 2017. Russia provided another $100 million loan for military equipment in 2017. In fact, I believe the $591 million in the Trading Economics graph includes part of this second loan, since the amount officially allocated from the budget was closer to $520 million (247.9 billion AMD). In addition to providing loans with easy repayment terms, Russia has also sold weapons to Armenia at domestic prices and has frequently provided military equipment for free. In a press conference in August 2020, Serzh Sargsyan announced that Russia had provided fifty thousand tons of military aid to Armenia prior to 2018.

The primary objective for the last two and a half years has been to paint a picture that Armenia was a failed state prior to the change of government in 2018 and that everything was built from scratch by Pashinyan’s administration. This could not be further from the truth, as evidenced by the numbers. However, pro-government propagandists are not concerned with the truth. They generate misleading content to plant seeds of doubt in the minds of the masses, hoping that intelligent people will simply dismiss the arguments rather than actively spending energy to refute them. The time has come to combat destructive propaganda such as this and to establish a new baseline truth, one anchored in facts and objective analysis, upon which all future political discourse will be built.