No, Democracy is Not New to Armenia

By: William Bairamian
In: History, Politics 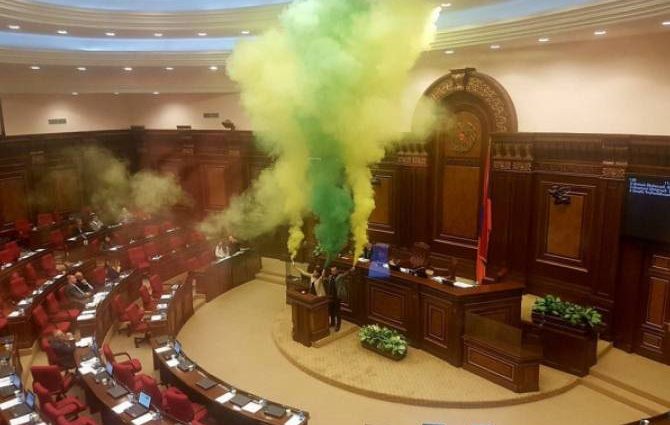 Let me briefly expound on my previous assertion that it is ridiculous to propose that it was Nikol Pashinyan who brought democracy to Armenia and why it is an expression of either ignorance or deception by the person who says this, as many people who fancy themselves intellectuals and thought-leaders are now doing.

Robert Kocharyan inherited from Levon Ter-Petrossian (LTP), Nikol Pashinyan’s primary sponsor in his early years, what Stepan Astourian, a professor at UC Berkeley, has called a “hyperpresidential” system, this meaning that Ter-Petrossian was able to run Armenia according to this system that gave him immense power. Ter-Petrossian had used this power wantonly, including in banning the Armenian Revolutionary Federation, one of his largest political opponents.

In 2003, when Kocharyan was up for re-election, do you know what happened? It went to a run-off for the first time in the former Soviet Union an incumbent was running for re-election. It was one of the gleaming examples of a burgeoning democracy that Kocharyan refused to fraudulently claim victory.

Even though Kocharyan won his re-election against halfwit Stepan Demirchyan, whom The Economist described as having inherited his father’s good looks but not his smarts, Demirchyan refused to accept the democratic results and…..launched protests (pay attention).

Do you know what Kocharyan did after winning his election and despite being known as an authoritarian all these years? No, you probably don’t because that information has been drowned out by the infantile slogans of LTP, Nikol, and the rest of their foreign-funded acolytes and globalist cosmopolitan supporters. Kocharyan, despite having no reason to do so, weakened the presidency through a constitutional referendum in 2005, organized in conjunction with (unfortunately) the Council of Europe. Did you get that? Kocharyan voluntarily weakened his own position in order to make the government more democratic.

Guess who opposed this reform? The opposition. That’s right, the opposition, which at the time was largely a group of Yerevan “elites” surreptitiously aligned with LTP who was in self-imposed hiding, were opposed to the reform that would weaken the nearly authoritarian presidential system Kocharyan had inherited from their political godfather.
What did they do? Protest, of course.

Now we come to 2008. Ter-Petrossian reenters the political stage to run against Serzh Sargsyan for president. Nikol Pashinyan, a yellow journalist who has been going to bat for LTP for the past ten years by printing every manner of defamatory lie about Kocharyan, Serzh Sargsyan, and others he refers to as the “Karabakh Clan” becomes one of his top lieutenants; LTP launches his campaign using much of the same language as Pashinyan has in his articles during the previous years (“corrupt,” “regime,” Karabakh Clan”).

The election happens. It’s unclear why anyone should think LTP – utterly disgraced in resigning, largely hated by the population when he left, and in hiding for the past ten years – should win. He loses. What about democracy, you ask? The OSCE itself said that, “the 2008 presidential election mostly met OSCE commitments and international standards in the pre-election period and during voting hours”; the European Union shared this view…the European Union!

LTP, Pashinyan, and the team reject the democratic outcome. What do they do instead? That’s right: protest.

This time the protests were different. This time people like Aleksandr Arzumanyan, LTP’s former foreign minister and top lieutenant, Aram Sargsyan (reportedly Vazgen Sargsyan’s brother), and Pahsinyan were resolute about making sure things were different. Pashinyan said from Liberty Square that they are going to take the government by attack” («մենք…գրոհով վերցնում ենք իշխանությունը») and then told protestors, under the guise of self-defense, to show up to the protests with wooden planks or rocks. Pashinyan also says that it is time to cleanse Yerevan of Karabakh scum (in reference to Kocharyan and Serzh Sargsyan). That night, 1 March 2008, 10 people die.

When this happens, Levon Ter-Petrossian is at home and has a telephone conversation with Arzumanyan the following day in surprisingly high spirits. And Pashinyan? He escapes and goes into hiding.
Pashinyan comes out of hiding, goes to jail, and is pardoned. By whom, you ask? Serzh Sargsyan.

Pashinyan enters politics and continues spewing lies like Kocharyan supposedly stealing $4 billion dollars from Armenia from parliament now. They become accepted as true. He’s supported by a massive network of foreign-funded organizations and media outlets that push the narrative that Kocharyan was an authoritarian dictator (who, ironically, left after his two terms were up) and Serzh Sargsyan was simply his authoritarian-dictatorial continuation.

Fast forward to 2013. Another presidential election, this time with Raffi Hovannisian as the main candidate (remember the Barevolution or, as I referred to it then, Barevofail?). Again, utterly incomprehensible why anyone would think Hovannisian, a former foreign minister and inconsequential parliamentarian, would win against Serzh Sargsyan who, besides five years as president, also had significant other policy and governmental accomplishments under his belt, to say nothing of the cultural factor (e.g. people couldn’t understand Raffi’s American campaign style of gladhanding random people). Hovannisian lost, the elections were deemed “mostly free” by international observers, and congratulations poured in from the EU, US, and others.

What did Hovannisian do? Yes, he and his supporters, including some from the LTP camp, rejected the democratic outcome and launched massive protests again.

The protests died down but the narrative that Serzh Sargsyan is an authoritarian dictator continue. Sargsyan literally does the opposite of what authoritarian dictators do: he liberalizes the media field, he allows foreign-funded organizations to run rampant in the country, and then there is the real big one: he rewrites the constitution not just weakening the constitution but eliminating the powerful presidency altogether by making the position a ceremonial head of state position and transferring the power to the prime minister. The new constitution requires more collaboration among parties wanting to enter parliament and thus makes power more diffuse, increasing the likelihood for coalition governments. This reform was undertaken in conjunction (again, unfortunately) with the European Venice Commission, who approved the constitutional changes.

What did the activists do when presented with this super-democratic reform? You again guessed right: they protested! Remember the Ո՛չ protest organized and led by the current Secretary of National Security Armen Grigoryan (no, it doesn’t make any sense so don’t try)?

The referendum passed and there were parliamentary elections in 2017: the Republican Party (HHK) came out on top. The election was judged by international observers as mostly positive, though, as always, there were some problems. This time, quite curiously, there were no large protests and, wouldn’t you know it, even Nikol Pashinyan effectively accepted the results.
But in 2018 when it was time to choose the prime minister, a right afforded to the HHK, who had won the 2017 parliamentary election and whose choice it was as the leading party in the parliament to choose their candidate, choose Serzh Sargsyan. Now the arguments about whether you like Serzh or think he made the right or wrong decision are irrelevant here. The point is that it was the HHK’s choice to make and they chose Serzh. That’s how the parliamentary process works.

Two and a half years later, Pashinyan, in one of the great acts of treason in Armenian history, went into a room in the middle of the night and secretly signed away 30% of the Armenian homeland. He did what he and his team of swindlers and enablers always accused Kocharyan and Sargsyan of having done: selling Artsakh. No parliamentary session, no consultation with the people, as he’d promised, just a secret signature by a single person in the middle of the night. Is this the democracy those pseudo-intellectuals are talking about?

No, Nikol Pashinyan didn’t bring democracy to Armenia, he destroyed it.

So, again, stop repeating these deceptive fabrications created by Nikol and his foreign-sponsored team: they are what led to this catastrophe in the first place. The ones who are using this line consciously are doing it to distract you from the only conversations we need to be having right now: the resignation of Traitor Pashinyan’s government and what we need to do next.