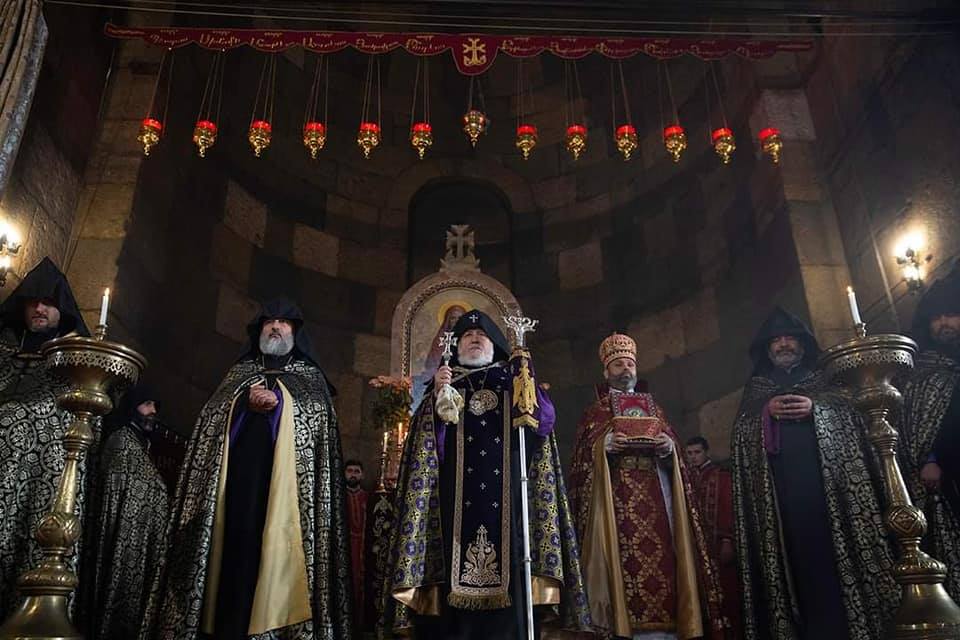 Preservation of Church and State

There hasn’t been much time to think about what happened during the war because we as a nation have not been allowed time to mourn in peace and to think about the tragedy that befell us. Instead, we were immediately catapulted into a political melee, having to fight internally to keep what is left. But one set of images has remained in my mind ever since: those of the soldiers being baptized by the priests of our Church before they went off to battle, some of them never to return.

It made me think of the tenuous relationship so many of us have with our Church, this permanent fixture in Armenian life. It made me think that despite our reluctance, our impiety, and our blasphemy, our Church has always remained steadfast, true to its mission.

We use our Church for our celebrations and lamentations, to give those moments in our lives meaning beyond the terrestrial. We take beautiful and haunting pictures of our churches and monasteries, built with the vigor of a faith barely perceptible today, and we take pride in our Church’s unshakeable existence throughout our history. Yet, when we have walked beyond its doors and off its grounds, we ignore it, disparage it, and mock it.

While it is our Church that has created and preserved the culture most of us – and the world – know to be Armenian today, including our letters, our art, our architecture, and much of our literature and music, we choose to ignore this and make it a scapegoat for our failings as a people. This became popular in some Armenian intellectual circles, influenced by the growing European skepticism of religiosity, during the Zartonk period – and has remained with us ever since. Our incompetence, our losses, our weakness are all somehow the fault of our Church.

In fact, it is the opposite.

A large part of the reason we are suffering today as a nation is because we have strayed far from our faith and our traditions, the vast majority of which are inseparable from our Christian faith and our Church. Our flippancy toward our Church and our faith is indicative of the lack of seriousness with which we approach the other aspects of our life, including the importance we ascribe to our homeland and the place steeped in our history and blood. Can anyone deny that gluttony, lust, covetousness, wrath, vainglory, sloth, and envy are prevailing elements of Armenian life today? Should there be any question that in engaging in these sins, we dessicate the fabric of our daily lives upon which we might build a nation whose members are ready not only to build, create, and strengthen their land and their people but also to sacrifice themselves for home, hearth, and Cross? Rather than be guided by the virtues upon which our faith and thus our nation are fortified, we are given to making every last excuse to indulge in vice.

And I am not holier than thou – I am also guilty.

After the atheistic Soviet Union handicapped our Church, there was hope that it could be revived. But, as in other places where liberal democracy has been injected or has developed, religion, but especially majority religions – like Armenian Apostolic Christianity in Armenia or Catholicism in Poland – come under attack. It is no wonder that the current liberal democratic government has not spared any effort in going after our Church from the very earliest days when the Catholicos was attacked by a band of protestors affiliated with the current leaders to more recently, when the government worked hard to remove lessons on the Armenian Church from the school curriculum.

Nevertheless, since the war, the two glimmers of light in the overwhelming darkness of these days have emanated from the Church. The first was the courageous priest in Sisian, who refused to indulge the traitor’s overtures. However, as a result, affiliates of the current government planned an attack on the Catholicos of All Armenians, Karekin II, on 27 December 2020.
The second glimmer of light was that the announcement of the attack resulted caused defenders of the Church to take a stand, showing up by the hundreds to Etchmiadzin to prevent the defiling of yet another holy site, the most holy site, in the Armenian Nation.

The plan of the subversives was foiled and they never came out of hiding and, ultimately, the defenders of the Church escorted the Catholicos from Saint Gayane Cathedral to the Holy See with nary a bulletproof briefcase or umbrella in sight.

On the note of the Catholicos, I can already guess what some of you are going to say: don’t. You have hopefully learned over the past few weeks, months, and years that much of what you know – or think you know – about the people and facts related to Armenia and Armenians have been part of a years-long campaign to undermine the very foundation of Armenian culture, society, and politics. Why should this be any different? The Catholicos and the Church itself have been subject to despicable rumors for which there is no evidence but which continue to circulate for no reason other than that people repeat it.

And is there any point at which one stops and thinks why it is that they hate or dislike every last leader of Armenia who doesn’t engage in populistic speechmaking? Why is it that Karekin II, along with many of Armenia’s modern-day leaders, is defamed with vile rumors of the most debased corruption? Could it be that someone recognized the importance of these people to the strength and unity of the country and the society and decided that they needed to be relentlessly targeted with unsubstantiated drivel that destroyed their reputations among the public and made it easier to divide the people and thus control the society?

Our Church has a great burden as our holy guide on earth. Even if it is sanctioned by God, it is nevertheless composed of fallible men. Do these men make mistakes? Yes, they do. But we make an even greater mistake when we forsake the whole institution – our Church, its history, and the inimitable figures that have emerged from its teachings – because of a few unsavory experiences or individuals.

Published in Church and Society