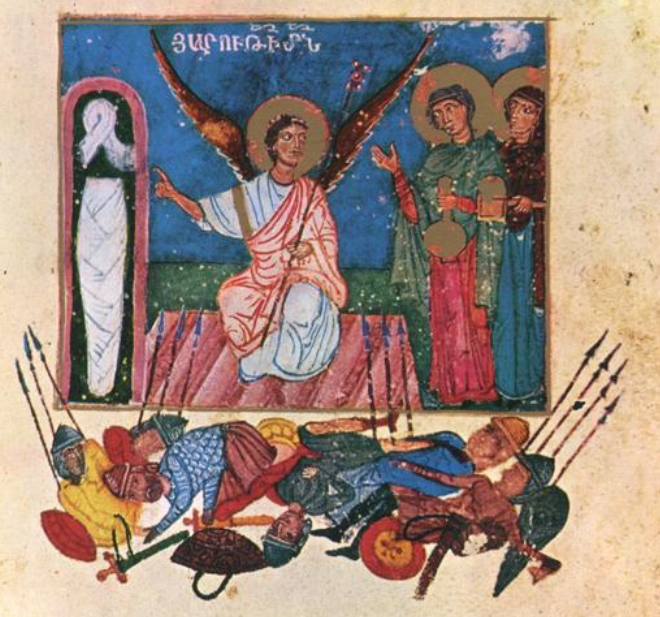 It is not easy for modern man to say anything about faith, Church, Christ, and God. It is an invitation to ridicule by the evangelists of modernity whose doctrine prescribes orthodox adherence to the cult of science and rationalism, an abiding faith that all truth is discerned through these two modern gods, though neither has yet been able to tell us why we’re here, why we love, or why Bach is beautiful. Any mention of Christianity – and, to be sure, it’s only Christianity – in anything but the most superficial terms will elicit smug mockery by the post-Christian heathens.

“Then they will deliver you up to tribulation and put you to death, and you will be hated by all nations for my name’s sake.” (Matthew 24:9)

Two-thousand years of intellectual flourishing, the development of educational systems from parochial schools to the university, the philosophy of Aquinas, the art of Michelangelo, the literature of Dante, the architecture of Notre Dame, the music of Komitas, and (yes) the science of Lemaître is reduced to decidedly unintelligent caricatures of anti-intellectualism represented by Galilean tropes.

The modern Armenian, as a conscious and unconscious exponent of these trends, is as likely to react with beguilement and smugness at Christianity as any other modern self-indulgent consumer who cannot begin to comprehend why one might deprive themselves of animal-sourced foods for 48 days in veneration of Christ, but is less incredulous when the same deprivation is done ad infinitum in veneration of animals. Of course, the archetype of the yoga-loving, incense-burning, bodhisattva-style meditator ready to look down upon the Christian who goes to a place filled with incense (church) to prostrate himself (before God) in mindful meditation (prayer) is not the only one. The main alternative, rather distinct from the former, is the neo-Pharisee. You may have encountered this person if you witnessed a planned or impromptu photo shoot during the Divine Liturgy or the spectacle of what you might think was a luxury car show or some astonishing immodesty befitting a nightclub or the group who stands outside smoking while the Eucharist is being celebrated inside.

Sunday is Easter, the holiest day in Christendom. It is the celebration of the Resurrection of Jesus Christ and it is the reason Christianity exists. It is very much the reason why Armenians are Christian. It is also why we have the alphabet we have used for over 1,600 years, it is why we built those 1,001 churches in Ani, and it is, ultimately, why we mourn our recent loss of Artsakh.

Our Church and our faith are what have preserved our essence for over 17 centuries, a witness to the Romans, Byzantines, Umayyad, Safavids, Seljuks, and Soviets. Yet it is with the fading of our Church and our faith that we see the last bits of our homeland become expunged not only of our people but of our heritage. Losses are temporary if memory, tradition, and devotion remain, but not if we forget why we cared about certain things. Today, when we observe and lament the devastation of various parts of the Armenian homeland no longer under Armenian control, we focus almost exclusively on the monuments of our faith – churches, monasteries, khachkars – that have been or are in the process of being destroyed. Perhaps it would be better to vest ourselves into understanding their value and importance prior to them again passing to our enemies. These monuments, after all, are not lambs for us to give to sacrifice.

It is the enigma of Armenian existence why our neighbors hate us so, why it is that they are intent on exterminating us. But do we ever ask whence our general unwillingness to defend against their onslaughts stems? The common refrain is that Christianity itself is to blame because Christ taught peace and love, the same Christ that likewise displayed his fury at the merchants and overturned their tables because they had converted the temple into a den of thieves (Matthew 21:12-13).

We are used to this sort of simplistic reasoning – ironic for the enlightened progeny of the Age of Reason – because it allows us absolution without the need for actual contrition. In this era where individuals, not traditional norms – and certainly not God – decide what is wrong, scapegoating anything that frees us of the burden of self-reflection and responsibility is openly welcomed.

But the reasoning that Christianity failed us is as weak as it is simplistic.

“Then Jesus saith to him: Put up again thy sword into its place: for all that take the sword shall perish with the sword.” (Matthew 26:52)

The faith of the Carolingians, the Byzantines, the Medici, the Hapsburgs, and the Romanovs infused these people and the places they ruled with divine providence but, according to Armenians, this same faith was the reason for our defectiveness. Or was our defectiveness a result of our own unwillingness to embrace fully that same divine providence? Would not our devotion to our faith and that which it produced – our alphabet, our literature, our churches, our learning – have led to a better understanding of what needs to be defended and, if it needed to be defended, an equal devotion to procuring the means of doing so? With little sense of the meaning of what we are trying to preserve, it is impossible to conjure the focus necessary to preserve it. Alternatively, we can channel the savages and raw savagery with which we are surrounded, we can emulate the barbarism to which we’re subject, we can fight simply for the sake of destruction. Is this what we want? Or do we a prefer a nobler fate, one where we fight for our faith, our culture, our churches and monasteries because we know why we are fighting for them?

Today the modern Armenian scoffs at Saint Vartan. He sees Vartan’s celebration as a martyr for Christianity as an example of Armenians celebrating defeat. This, like most of modernity’s tedious redefinitions, is a perversion. Saint Vartan’s martyrdom was not a defeat but a victory indeed, one for Christianity and the Armenian Nation, because he fought and died to preserve what was essentially Armenian: the Armenian Church. He is a paragon of self-sacrifice, one which we must learn from. If it weren’t for St. Vartan, there is no reason to think we would be any different from other conquered and assimilated peoples in the Near East that have either disappeared or become so subsumed into other states that they effectively don’t exist as a separate culture. It is the very spirit of St. Vartan that must again prevail among Armenians if we are to preserve the little that is left and, beyond preserving it, rebuild beyond the limits which we have placed on ourselves. To be enlivened by his spirit means not only celebrating our ability to preserve but also building upon his legacy to bring our people to a stage of national fecundity.

We do not scoff nearly as much at the gluttony, lust, or greed that distracts us from the concerns of our nation and our heritage; our pride, king of all sin, is least of all our concerns and makes it impossible for us to consider our errors, admit our mistakes, and repent. “Pride goeth before destruction: and the spirit is lifted up before a fall” (Proverbs 16:18). Would we be here today if we were not so proud?

This Easter Sunday, more than other Easter Sundays, we have occasion to think about the meaning of our culture, our history, our traditions, and our faith. Will we admit that it is our weak and deteriorating connection with these things, in Armenia and Diaspora, that has led to our present troubles? Do we have the courage to disrupt our lives of material consumption, limitless pleasure, and nihilistic narcissism? For the modern Armenian this is an impossible task; for the faithful Armenian, it is not.

“Jesus said to them: Because of your unbelief. For, amen I say to you, if you have faith as a grain of mustard seed, you shall say to this mountain, Remove from hence hither, and it shall remove; and nothing shall be impossible to you.” (Matthew 17:19)

More from ChurchMore posts in Church »