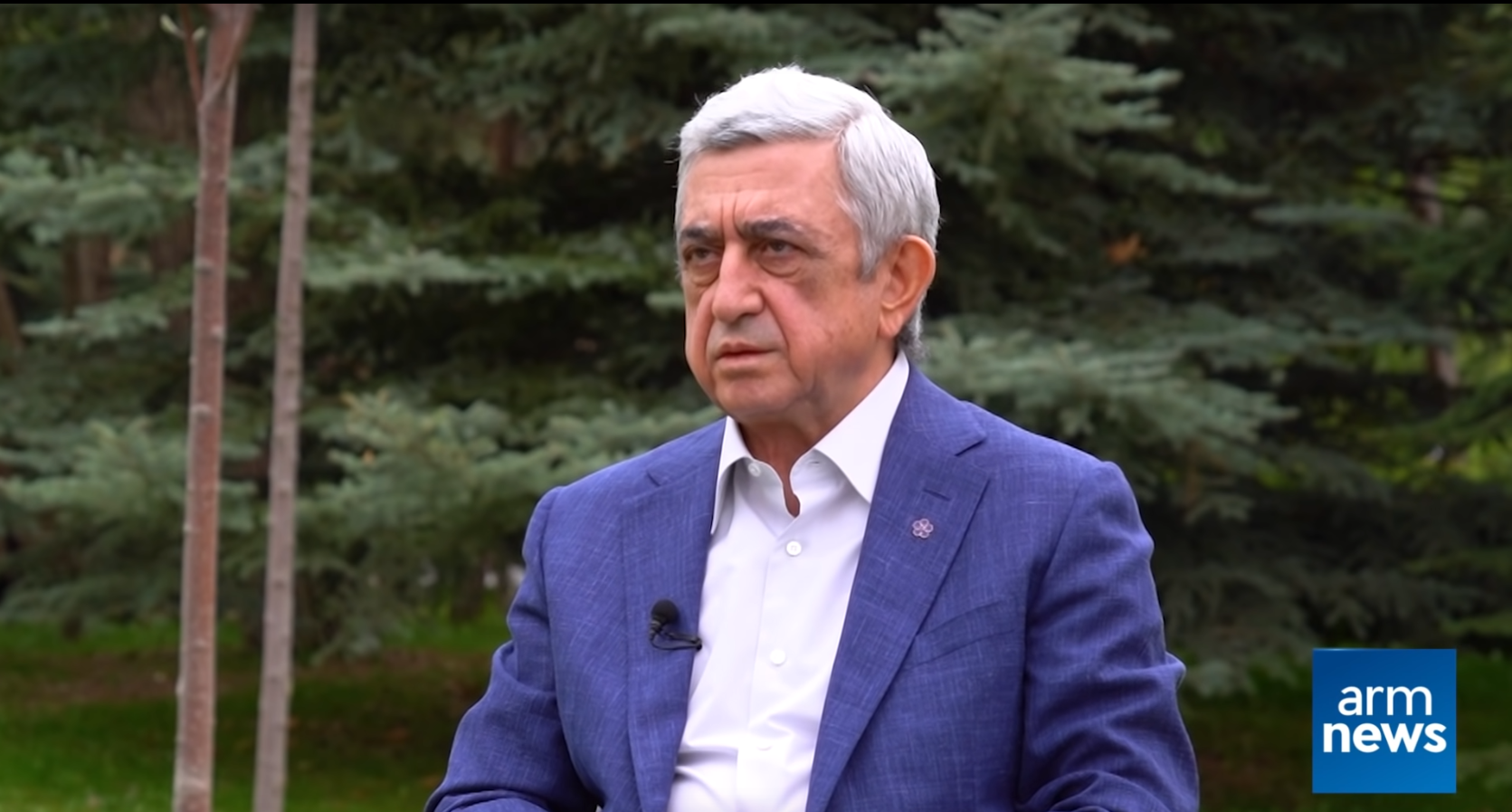 An interview with Armenian national hero and third president Serzh Sargsyan just premiered on ArmNews TV. He was interviewed by Mher Mkrtchyan.

Here are some highlights that I edited from the live tweets I did on my Twitter account (quotes are all Sargsyan’s unless otherwise noted):

Sargsyan says he didn’t lose to “these guys [Pashinyan], I lost to much more powerful forces.”

ABOUT “NIKOL WAS RIGHT, I WAS WRONG”

Mher Mkrtchyan: “Why wasn’t Karen Karapetyan nominated from the get-go to replace you?”

Sargsyan: we agreed that it would be best that we continue with me as primary negotiator re: Artsakh as PM and he remains in his position essentially running the economy; Karapetyan agreed.

Sargsyan says Karapetyan asked him to remove laudatory statements about him (Karapetyan) in his resignation text; Sargsyan acquiesced.

Sargsyan saying he continues to hold Karapetyan in high esteem, contradicting rumors that have circulated that Karapetyan was in cahoots with Pashinyan.

ABOUT THE USE OF FORCE

Sargsyan says that he was not ready to use force and for people to die in order for him to hold onto power.

ABOUT PASHINYAN’S TIME IN POWER

Sargsyan: “These past three years, all they [Pashinyan and his government] have done is destroy.”

Sargsyan:”Irresponsible people are the most dangerous.”

Sargsyan: “In the April War, we lost 75 soldiers who fought valiantly and lost 400 hectares and we were responsible for that but they lost [a majority of Artsakh] and 5000 lives and they’re not responsible?”
This is an allusion to Pashinyan’s unwillingness to take responsibility.

Mkrtchyan: “Armen Sargsyan, why? Why did he become president?”

Sargsyan: “He had the capability and knowledge, according to me…but, as they say, nobody is perfect…a person’s essence appears in times of crisis…Armen Sargsyan wasn’t able to distinguish himself. It’s a shame.”

Serzh Sargsyan very critical of Armen Sargsyan for not using the powers endowed to him by the Constitution of Armenia to oppose Pashinyan at several junctures.

ABOUT SOROS AND SOROS-FUNDED AFFILIATES

On the question of Soros and its affiliates, he says that Open Society Foundations was established in Armenia in 1997.

Sargsyan rejects the idea that Soros organized the coup in 2018. He again references “more powerful forces” that had the technological ability to conduct the coup.

Mkrtchyan: “Why didn’t you ask for help from Russia?”

Sargsyan: “It never crossed my mind to ask our strategic partner for help to hold onto power.”

Sargsyan: “If we organized snap elections, it may have devolved into a civil war given the circumstances at the time [April 2018].”

Sargsyan: “People would have blamed us if a civil war started – they blame us now for allow Nikol to come to power. Fine, we accept responsibility. Let us be guilty. But let people wake up and realize what’s happening.”

Sargsyan: “What were we ready to give to them? In exchange for peace and our conditions, five regions were supposed to be given to Azerbaijan while Karvajar (Kelbajar) and Berdzor (Lachin) would be left until the rest of the plan was implemented…Shushi was never on the table.”

Sargsyan: “The agreement would have to be signed by all parties as well as the UN Security Council.”

Mkrtchyan: “Are there foreign spies in Armenia today?”

Sargsyan: “I don’t know…but those spies you’re asking about is what they looked like 20-30 years ago, not what they look like today. Someone can serve foreign interests simply through their stupidity.”