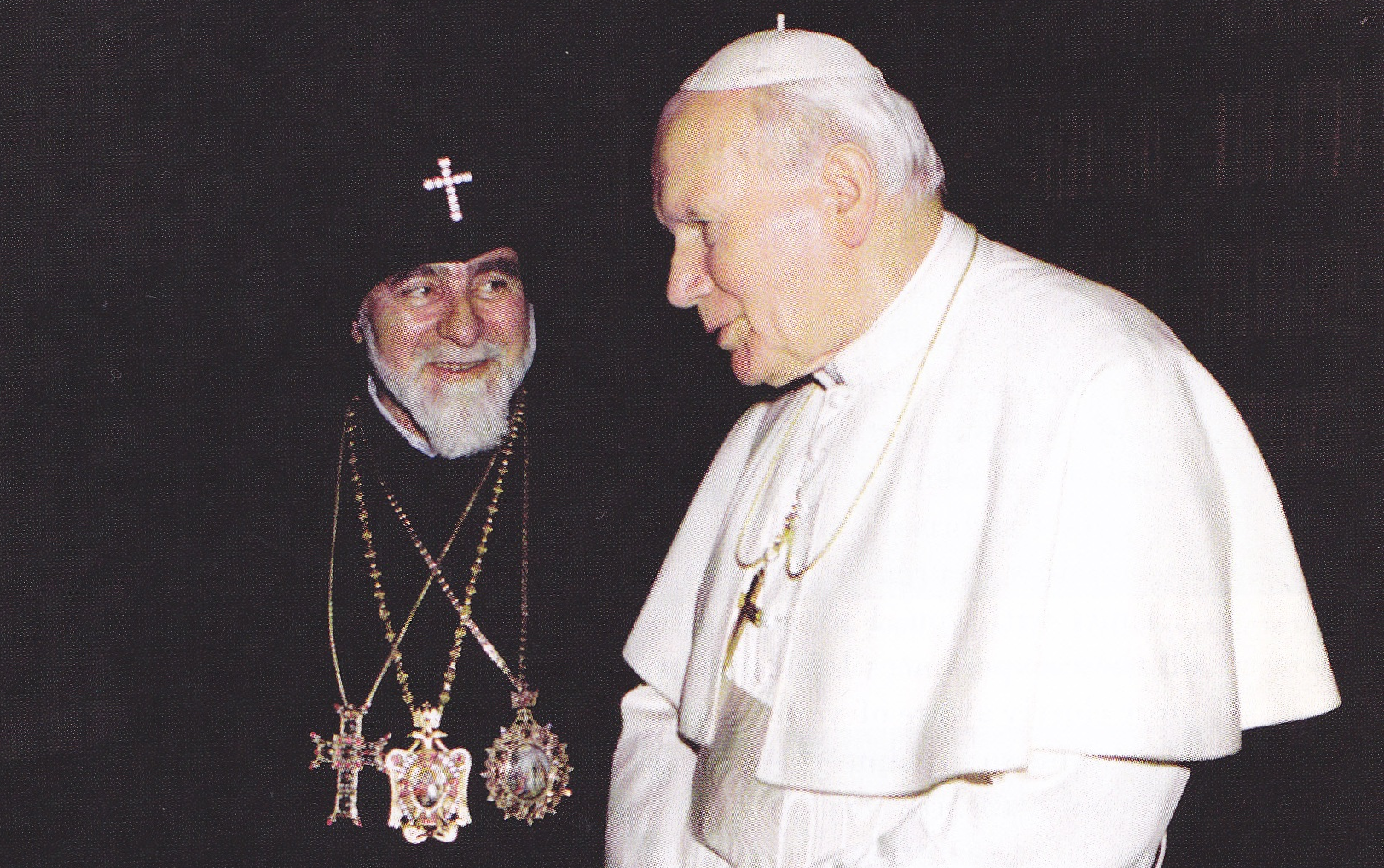 Ecumenical Declaration of Pope John Paul II and Karekin I (1996)

Common Declaration of His Holiness John Paul II and His Holiness Karekin I Sarkissian, Supreme Patriarch and Catholicos of All Armenians

As they bring to a close their solemn meeting which they are deeply convinced has been of particular significance for the ongoing relations between the Catholic Church and the Armenian Apostolic Church, His Holiness John Paul II, Bishop of Rome and Pope of the Catholic Church, and His Holiness Karekin I, Supreme Patriarch and Catholicos of all Armenians, give humble thanks to the Lord and Saviour Jesus Christ who has enabled them to meet in His love for prayer together, for a fruitful discussion of their common desire to search out a more perfect unity in the Holy Spirit, and for an exchange of views about how their Churches may give a more effective witness to the Gospel in a world approaching a new millennium in the history of salvation.

Pope John Paul II and Catholicos Karekin I recognize the deep spiritual communion which already unites them and the Bishops, clergy and lay faithful of their Churches. It is a communion which finds its roots in the common faith in the Holy and life-giving Trinity proclaimed by the Apostles and transmitted down the centuries by the many Fathers and Doctors of the Church and the Bishops, priests, and martyrs who have followed them. They rejoice in the fact that recent developments of ecumenical relations and theological discussions carried out in the spirit of Christian love and fellowship have dispelled many misunderstandings inherited from the controversies and dissensions of the past. Such dialogues and encounters have prepared a healthy situation of mutual understanding and recovery of the deeper spiritual communion based on the common faith in the Holy Trinity that they have been given through the Gospel of Christ and in the Holy Tradition of the Church.

The reality of this common faith in Jesus Christ and in the same succession of apostolic ministry has at times been obscured or ignored. Linguistic, cultural and political factors have immensely contributed towards the theological divergences that have found expression in their terminology of formulating their doctrines. His Holiness John Paul II and His Holiness Karekin I have expressed their determined conviction that because of the fundamental common faith in God and in Jesus Christ, the controversies and unhappy divisions which sometimes have followed upon the divergent ways in expressing it, as a result of the present declaration, should not continue to influence the life and witness of the Church today. They humbly declare before God their sorrow for these controversies and dissensions and their determination to remove from the mind and memory of their Churches the bitterness, mutual recriminations and even hatred which have sometimes manifested themselves in the past, and may even today cast a shadow over the truly fraternal and genuinely Christian relations between leaders and the faithful of both Churches, especially as these have developed in recent times.

The communion already existing between the two Churches and the hope for and commitment to recovery of full communion between them should become factors of motivation for further contact, more regular and substantial dialogue, leading to a greater degree of mutual understanding and recovery of the communality of their faith and service.

Pope John Paul II and Catholicos Karekin I give their blessing and pastoral support to the further development of existing contacts and to new manifestations of that dialogue of charity between their respective pastors and faithful which will bear fruit in the fields of common action on the pastoral, catechetical, social and intellectual levels.

Such a dialogue is particularly imperative in these present times when the Churches are faced with new challenges to their witness to the Gospel of Jesus Christ arising out of the rapidly changing situations in the modern world so deeply affected by an extreme secularistic and secularizing pace of life and culture. It requires closer collaboration, mutual confidence and a greater degree of concern for common action. It presumes and requires an attitude of service which is not self-seeking and which is characterized by a mutual respect for the fidelity of the faithful to their own Churches and Christian traditions.

They appeal to their clergy and laity to carry out more actively and effectively their full co-operation in all fields of diaconia, and to become agents of reconciliation, peace and justice, struggling for the true recognition of human rights and dedicating themselves to the support of all those who are suffering and are in spiritual and material need throughout the world.

John Paul II and Karekin I express a particular pastoral concern for the Armenian people, both those living in their historic motherland where freedom and independence were once more recovered and re-established recently through the creation of the new Independent State of Armenia, those living in Nagorno Karabagh in need of permanent peace, and those who live in a state of world -wide diaspora. Amid upheavels and tragedies, especially during this century, these people have remained faithful to the apostolic faith, the faith of martyrs and confessors, the faith of millions of unnamed believers for whom Jesus Christ, the Son of God incarnate and Saviour of the world, has been the foundation of their hope, and whose Spirit has guided them across the centuries. As they approach the 17th centenary of the official establishment of the Church in Armenia, may they receive the special blessings of the Triune God for peace with justice and for a renewed dedication to witnessing faithfully to the Lord Jesus Christ.

Published in Church, Ecumenism and Library