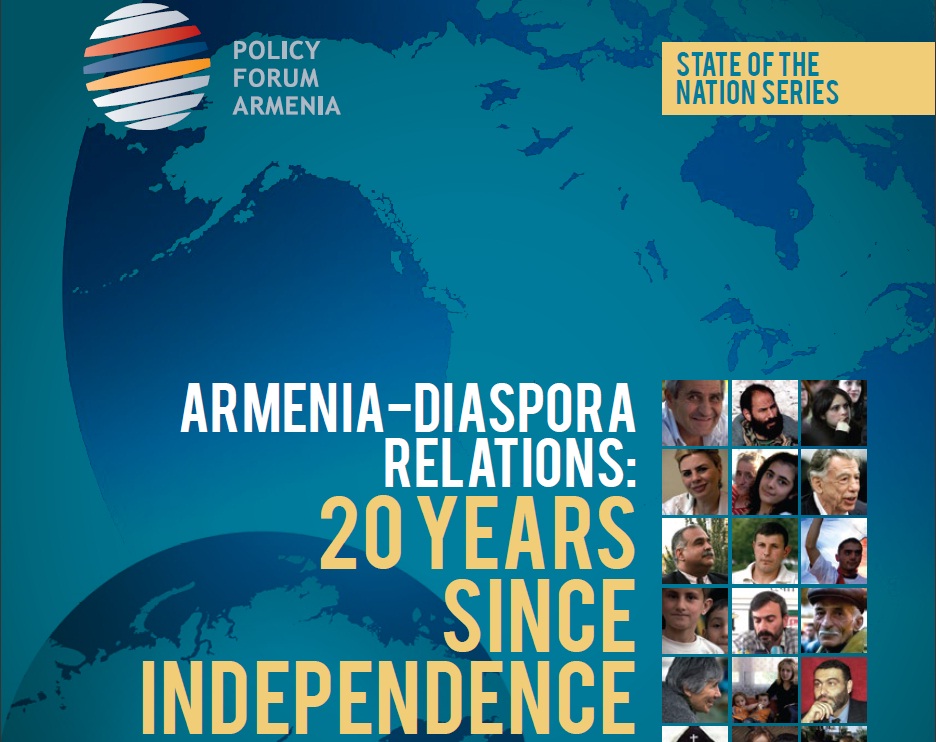 An Abridged Analysis of the PFA and its Recent Report

The Policy Forum of Armenia (PFA) recently hosted a forum at the Glendale Public Library based on its publication, Armenia-Diaspora Relations: 20 Years Since Independence. The Report is meant to be a critical analysis of the relationship between the Diaspora and Armenia since an independent Armenian republic was established. I believe that the PFA’s message in the Armenia-Diaspora report is counterproductive and is simply an organized iteration of an already tired discourse.

Although a more thorough critique of the PFA’s Report and corresponding panels is possible, and necessary, I will aim to concentrate on two areas: first, the purported discord between Armenia and the Diaspora and second, the supposed inefficacy of Diasporan organizations in improving Armenia’s lot.

An initial conjecture by the PFA is that there has been a drift between the Diaspora and Armenia from the time of the Republic’s independence movement. This is confounding because it is unclear what relations between the two were in existence prior to Armenia’s independence that such a drift could even occur. That is akin to saying that the planets in the universe were drifting apart before the universe ever existed. Regrettably, this disingenuous statement was the model which was followed throughout the PFA’s report, without proper qualification.

This dubious “drift” notwithstanding, the PFA’s idea that there is discord between the Diaspora and Armenia is premised on an idea of bringing “the two halves of the nation together”. It proceeds by implying that the Diaspora has certain responsibilities toward Armenia and that it has failed in fulfilling those responsibilities. In general terms, it is wrong to portray the relationship between the Diaspora and the Armenia as though the former has a debt to pay to the latter.

The Diaspora is wholly independent of Armenia as an entity, it developed in the void of an Armenian state and, in that time, it assumed a distinct character. Expectedly, its objectives oftentimes do not correspond to those of the Armenian government or the necessities of the Armenian citizenry. Accordingly, to point to these differences between the Diaspora and Armenia as though they belie a discord between the two is maladroit.

Just as Armenians who lived under the Soviet yoke for eighty years have had an occasionally difficult time adjusting to newfound freedoms in both the Diaspora and in Armenia, likewise have Diasporan Armenians had to adjust to the reality that there is an Armenian state with which they may now establish a relationship. Even when individuals from the Diaspora have made forays into Armenia, they have sometimes, unfortunately, had to deal with the vastly different circumstances of doing business there, including corruption and a weak legal system.

Although, given these realities, it would have been understandable if Diasporans took some time to warm to the idea of an independent Armenia, the complete opposite occurred and relations were quickly established between the two. To criticize the Diaspora for not living up to its potential chooses to ignore the incredible confidence that Diasporans have indeed placed in Armenia’s development, despite very significant differences of opinion with their brethren.

The PFA’s neglect of the many Diaspora-Armenia organizations that have continuously fulfilled social and humanitarian needs, among others, over the past twenty years, is truly befuddling. Diasporans have attempted to repopulate Armenia’s forests (Armenian Tree Project and Armenian Forests NGO); established the worldwide Armenian Bone Marrow Donor Registry; built roads, hospitals, schools, and waterways with millions of dollars that have been raised though ArmeniaFund; helped to rebuild homes (AYF Youth Corps and the Land and Culture Organization); and, hundreds of Diasporan volunteers, both youth and professionals, have volunteered in the fields of civil society improvement, law, women’s rights, and development (Armenian Volunteer Corps and Birthright Armenia).

Based on the PFA’s criticism of the Diaspora, one might think that it expected the Diaspora to act as an international organization, à la the UN and World Bank, providing economic aid and creating “investment vehicles”, governance assistance programs, and policy advice pipelines. Although I credit the PFA for being ambitious, it could have certainly made such suggestions without attaching a critique of the Diaspora’s efforts for context.

There are certainly many problems with the Armenian Diaspora, its disjointed governance, its internal struggles, its apathy, and its own existential worries as it concerns the survival of an Armenian identity and language within it. The PFA chooses to superficially touch upon these problems without properly considering their gravity and how they might affect the Diaspora’s relations with Armenia – typical of a coffee shop argument based on hyperbole rather than any multi-variable scientific study one might expect from a policy think tank.

It is surely helpful to believe that more can always be done and that is an approach that would benefit Diaspora-Armenia relations. Nevertheless, to categorically ignore reality and then to present a suffocatingly negative perspective is really an excess that could have been avoided if the PFA’s true objective was to foment any sort of progress.

Curiously, the Policy Forum of Armenia seems overly concerned with the failings of the current Diaspora political organizations and less with suggestions about what the Armenian community can do to improve its effectiveness in the American political system. I postulate that this is because many of those involved with the PFA, although strikingly critical of the work of current Diaspora political organizations, have a scant understanding of how those organizations work to offer a proper critique of them. Moreover, I venture that those PFA individuals have spent few hours assisting or doing any of the work they are criticizing those organizations of not doing, such as increasing economic aid to Armenia.

Our Diaspora political organizations lack two grave resources: manpower and money. Although, for example, an organization like the Armenian National Committee of America (ANCA) has a large grassroots network, its staff in Washington, DC, is comprised of four full-time employees and two part-time ones. With such a small workforce, it is a wonder that Armenia is able to get any economic aid from the United States at all. But they do.

Despite their small size and comparatively limited financial resources, Diaspora political organizations have been able to win aid for Armenia and Nagorno-Karabakh; they have required elected representatives to take note of, and respond to, the Armenian-American communities throughout the United States; and, they have made progress in motivating Armenian-American Diasporans to participate in the electoral process, among many other things. The PFA acknowledges some of these accomplishments but treats them as being given, failing to properly appreciate the difficulty with which these victories were achieved, again, likely as a result of their unfamiliarity with politics on the ground level.

The PFA Report makes strong statements about why Diaspora organizations are not serving the communities they represent but their claims lack the statistical analysis – surveys or polls – that would support its points; analysis that might be expected after reading about its operational objective of “using the latest social science research methodologies[…]” on its website.

It would have been useful to see the PFA study the phenomenon that despite the massive increase in the number of Armenians in the United States in the past thirty years, there does not seem to have been a corresponding increase in the number of active participants in national political activism by Armenian-Americans, nor has there been a markedly large increase in the financial resources of these organizations. This is very likely the result of the tendency of many Diasporans, both newly arrived and longtime residents of the United States, to act as armchair observers and offer their opinions about what is not being done without doing anything themselves.

What I do find especially fascinating is that although the criticisms about the organizations and their work are plentiful, there has not been any sustained effort to fill the gaps that these organizations indeed have left open.

If one were to speak to anyone involved with any Diaspora political organization, they would know that many criticisms about their shortcomings emanate from the organizations themselves. The difference between these individuals and those of the PFA’s ilk is that the former are actually working while the PFA is enumerating known problems.

I would be sincerely pleased to see a Diasporan organization wholly committed to increasing economic and military aid to Armenia. Thus, I propose that the PFA assume this responsibility so as to alleviate the workload currently borne by the existent organizations in the absence of others who could be doing that work instead.

The perverted aspect of PFA is that it gives our community members who already do nothing an outlet for them to justify their apathy and inaction. They can now point to the panelists with prestigious titles that are leveling opprobrium onto the Diaspora and its current organizations and say that they would indeed like to get involved were it not for the inherent problems of the system. This convenient excuse will undoubtedly lead to the PFA enjoying an increase in its support base but it will not change the dynamic when it concerns Diasporans taking a more active interest in both their own political affairs, and those of Armenia’s.

The trap of political intellectualism is that it is often accompanied with a vociferous commitment against physical involvement, endless musing and conversation being preferred to actual work. As such, the PFA’s approach is to place the onus of responsibility on others – the Diaspora, the Diasporan organizations, the Armenian government and populace – while it observes and critiques their activities.

The Armenian community is already replete with critics; what it needs are actors. I commend the PFA for endeavoring to invigorate discussion about ways to improve Armenia. But, if it intends to reach its purported goal of “strengthening discourse on Armenia’s economic development and national security and through that helping to shape public policy in Armenia”, it would do well by engaging apathetic Diasporans instead of formalizing the inane political analyses of the dinner table.

Armenians have not earned the right to criticize their Diaspora and its organizations because they are far from being involved and active enough in them to have reached that point. Once individual Diasporans assume the burden of responsibility on each of their own shoulders, they may begin to criticize those who have already done so, albeit with much due respect.

Originally published on Asbarez on September 17, 2010.

Published in Diaspora, Nation and Politics