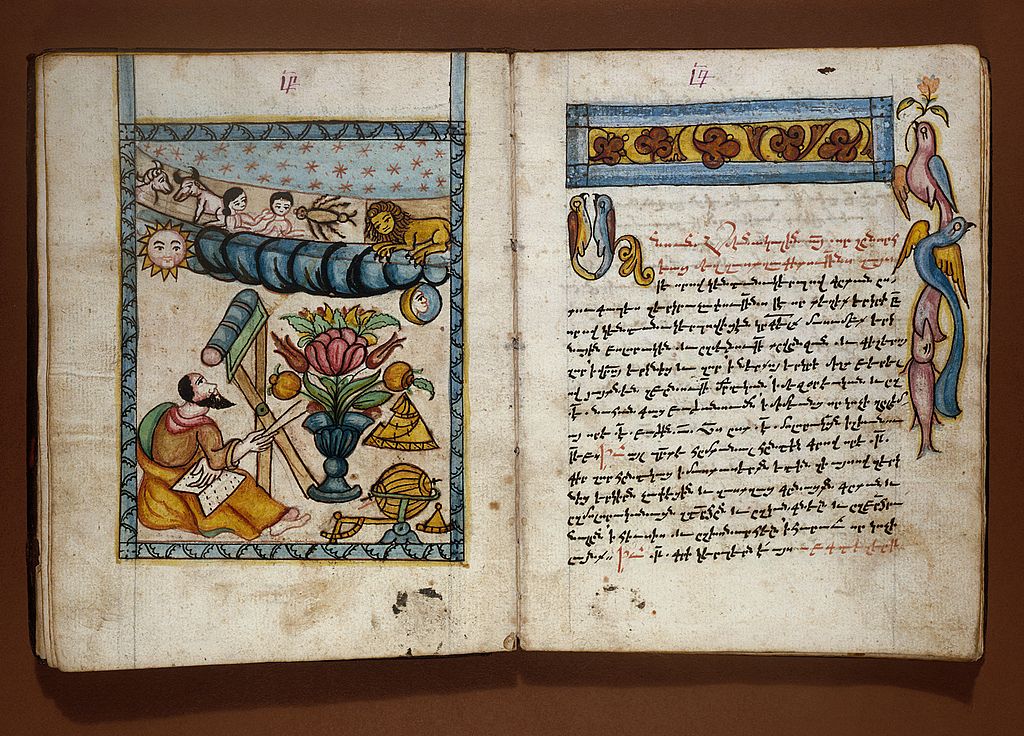 Learning Armenian: The Art of Telling an Armenian Story

In her previous article, Karmun Khoo offered up some tips for those of you who are also learning Armenian. This week, she writes of her enchantment with Armenian stories.

Armenian is a language of stories.

“Sure,” you might say, “but what language isn’t built for stories?” Languages are used to communicate, of course, but the Armenian tongue is different. It percolates through another layer of use, sounding as if it’s been designed for monologues and records and for expressing your past and present.

Through my writings in The Armenite, you’ve probably noticed that I’m fascinated with the Armenian language. But with each lesson, I’ve come to realize that it’s when these unique letters and words turn into stories that the Armenian language illustrates its true strength. Let us explore, then, the elements of an Armenian story.

One of the most important parts of any story is the setting, and this is where Armenian prepositions demonstrate their vitality, flexibility, and ingenuity. Instead of clunky phrases like “on the table,” Armenians simply add the suffix –in to the word “table,” to create a more fluid-sounding “seghan-in.” There’s also an idiomatic aspect to how these preposition suffixes are chosen. For example, even though a book might be “on the shelf,” the Armenian word is “baharan-um,” literally “in the shelf.”

The beautiful way in which settings are described is illustrated perfectly in an excerpt from History of Taron by Hovnan Mamikonian:

In English, this sentence translates to: “Having told St Gregory (of the incident), they remained there, some on the watchtower, and the other part of the army in the forest, near the source meadow.”

The poetic nature of the narrative aside, I was instantly drawn to the words for “source meadow”: “աղբյուրի մարգագետնում.” An ode to Armenian creativity, the words “source meadow” refers to the front of a meadow, the physical anterior to the forest. But the word for “source” (“աղբյուրի” ) also means “spring,” which paints the picture of a forest growing all around a beautiful meadow, deriving its life from the sweet green grass.

After providing a setting, it’s every good storyteller’s job to describe with detail what’s happening in the tale using adjectives. Armenian adjectives, while operating similarly to their English counterparts, are far more evocative in nature. Take the word for “happy” — “oorakh” — as an example. The connotation sounds almost celebratory, like “hurrah,” the universal expression for spontaneous joy. Equally fascinating to me is a derivative of this Armenian word, its verb, “oorakhatsnel.” In English, we cheer someone up; in Armenian, we happify them.

The same can be said for the opposite side of the emotional spectrum. In Armenian, “sad” is “dkhur,” the word sounding like a dejected sob warbling out from a regretful heart. Another Armenian word with a heartwrenching sound? “Charcharum” — which means “tortured.” Take, for example, this extract from a story found in Armenian Folk Tales:

In English, the sentence translates to “One day, the boy saw that the village children had caught a cat, beaten it, and tortured it.”

The last word of that sentence – “չարչարում” – means “tortured” and given its intonation, you can quickly sense the word’s severity. Charcharum. Its repetitive, glottal stop sounds like a cry for help. Its harsh, grating sound is jarring to the ears. It’s a word full of suffering and one that proves that the best words do not dictate an image: they suggest one.

But what good are settings and descriptions without the fundamental element that makes up a story? The plot. The sole factor that differentiates a story from a mere description is the presence of some verbs. Before my weekly Armenian lessons, I knew that Armenian verbs existed, but I wasn’t very good at conjugating them.

In my defense, Armenian verbs are very difficult to learn. “Yes em,” “du es,” “na e” (“I am,” “you are,” “he/she is”) become complicated because the “em” never stays with the “yes.” The pronoun and its verb are sometimes parted and banished to opposite sides of the clause or, worse yet, the pronoun is completely absent and I must deduce its identity from its conjugated verb.

Unlike in other languages I’ve learned, where the conjugation is applied directly to the verb, in Armenian, it’s a little more complicated. For example, “I speak” would be “khosum em,” but “khosum” was originally “khosil” (“to speak”) and I still have to conjugate the “em” behind it. It feels double-barreled, but makes sense after some contemplation. After all, is the present tense – “I am speaking” – not continuous? Armenians have whittled their language down to its most logical core.

“Speaking,” the present participle, remains as “speaking” across the different pronouns, but the “I am,” “you are,” etc., continue to be conjugated. Yet, the subtlety of the language, whereby the pronouns “I” and “you” are rarely found in speech, lend a dramatic and powerful current to its statements.

In this excerpt from Pavtos, a fifth-century text found in the Eastern Armenian Children’s Encyclopedia Voskeporik, the hero sees his fallen comrade and makes a vow:

This translates to: “Mine is the place where you’re sitting. Get up from that place where I own, because our state was the largest in the nation, and if I had my world, I will go back, I will avenge you.”

The use of “I” in this sentence – ես – emphasizes the severity of the pledge. The speaker is taking personal responsibility for his words. Mine is the place. I will go back. It’s the conjugation system that has allowed the author to split his sentence up into several parts, all of which seem to crescendo from the preceding one. It’s a stirring speech, with raw emotion that could not have been crafted without the mathematical precision of Armenian syntax.

This sort of grammatical exploration may have daunted me in the past, but learning Armenian has empowered me. It sounds almost silly to say: sitting in front of a computer screen and writing things down is hardly a trial by fire. But learning the language week after week has enriched my appreciation for differences.

English speakers have a reputation for being lousy at learning new cultures and tongues. Maybe it’s because we know that English is the world’s lingua franca. But as a student of Armenian – a language so beautiful that I’ve expounded on its intricacies countless times and am still not done admiring it – I know that I must be humble.

When you knock on the door of a language and say “Let me in!”, you can’t afford to be egotistic. In the age of globalization, where culture is cheap, we have forgotten that generations of Armenian artists, writers, warriors, and thinkers have fought to preserve their language and develop it furthermore. Being able to read and write in Armenian is a beautiful thing. Something about the language changes your soul.

At the beginning of this article, I wrote that Armenian is a language of stories. But it does not just tell you its story. It writes its story on you, carves it in your bones, and bids you to take its spirit with you into the wide, wide world.

How can we, then, welcome ourselves to the Armenian culture? How can we exchange stories with it, so that we might all come out richer in mind? The answer is to keep them in the forefront of our minds.

Whenever we read an Armenian news story or hear of an Armenian who’s reached the highest echelons of success, let us not dismiss each report with a glance and flip of the page. Let us think of what has brought these people into the news. Let us imagine their lives, their sorrows, their happiness, and their identity as humans and Armenians alike.

After all, this is the power of a good story. It brings people together. It’s a small matter if the readers have never met or likely never will. We can congregate through our stories. And as long as the Armenian language survives, then there will always be Armenians. And they will forever spin out stories that will captivate the world.

Karmun Khoo was born and bred in Singapore and currently lives in Melbourne, Australia. She is a self-described polyglot, passionate about Armenian culture, and works on short stories and novels in her spare time.