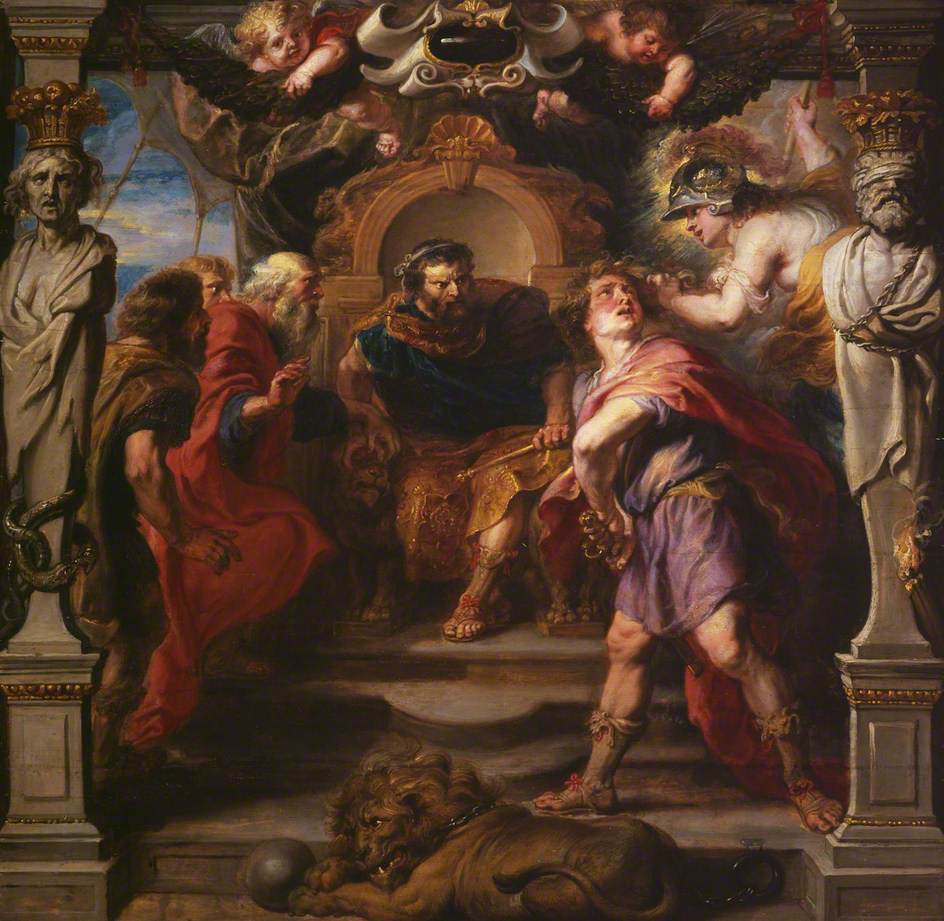 “Every man should be gentle, but also passionate; for he must have the spirit to fight against incurable and malignant evil. But the evil which is remediable should be dealt with more in sorrow than anger. He who is unjust is to be pitied in any case; for no man voluntarily does evil or allows evil to exist in his soul. And therefore he who deals with the curable sort must be long-suffering and forbearing; but the incurable shall have the vials of our wrath poured out upon him.”

My writings of the past weeks have elicited bountiful commentary on the harshness of my tone and language. The reproaches – and not all remarks about my acerbity have been reproaches, to be sure – have centered on the principle that I can catch more flies with honey than with vinegar.

Flies, sure, but what about locusts?

Armenians have an obsession with two derivative ideas, peace and unity. These ideas in their raw forms are poison pills for a nation but the superficial understanding of both cause leaders and laymen in our society to develop unhealthy fetishes with them.

First, we think of peace in the way our stateless merchant forefathers thought of them: at any cost, so long as our bellies are full. It is further an indication of our weakness as a people, our unwillingness to confront the difficulties of existence in a brutal world. We prefer the role of the sycophant and the slave, roles more familiar to many among us who are the inheritors of this culture that tenuously kept them alive for periods between massacres and persecution.

It is this infantile obsession with peace that leads successive generations of our people through the gates of perdition. Our great men, those who had the clairvoyance to warn against the perils of appeasement, have begged our people to defend themselves to no avail because their detractors have falsely prophesied the end of our ills through voluntary subjugation and genuflection.

Our current devastation is the result of these nefarious or illiterate minds whose interest in peace has superseded existence itself: a state, a homeland, is of little need for itinerant merchants for whom individual survival is more important than the survival of a society upon which a state can be built.

That is why so many are willing to bandy about the dubious assertion that thousands of lives were saved by the signing of the capitulation agreement: can anyone imagine Churchill or Stalin saying that as the Nazis were attacking them and threatening the very existence of not only their countries but their people? That it was worth giving up London or Paris or Stalingrad in the hope that ravenous Reich would be satiated?

But it is hard for a merchant to comprehend principles and concepts that transcend the purely economic. This is also why one of the earliest enticements pushed by Traitor Pashinyan’s government and its apologists was the economic prosperity Armenians would soon enjoy through free trade with our enemies, the same enemies still beheading and otherwise humiliating Armenians.

And then there is unity. This mindlessly repeated platitude about Armenians uniting is a favorite of the charlatan who wants to trick you into thinking he’s read poetry by reciting the one line of Charents, which is the only line of poetry he’s ever read or heard.

Unity with whom, exactly? Perhaps Charents himself was proposing that the Armenian subjects of the Soviet Union unite with their Armenian Bolshevik overlords, the same ones who later murdered him. No? Whyever not? Were they not Armenian? Of course that’s not what he meant but it is useful for the propagandist that prefers to impose a monochromatic world on his subject, like splitting people in blacks and whites, for example.

And not only will I not unite with them, I will be blunt and caustic and scathing because that is what they deserve for what they have done and continue to do.

This is to say nothing of the fact that the same people so squeamish when I call their idiot uncles idiots or say that they need to be held accountable for acting as apologists for treason were so quiescent when it came to the years-long defamation campaigns against heroes of the Armenian Nation. Where were they when Nikol Pashinyan was disparaging Vazgen Sargsyan? Where were they when Pashinyan and his co-conspirators were spreading lies about Robert Kocharyan? Where were they when Levon Ter-Petrosyan was echoing Pashinyan’s articles in calling Kocharyan and Serzh Sargsyan the “Karabakh Clan” and a “criminal-oligarchic regime,” terms that were and still are used without people so much as batting an eyelash.

So, no, I don’t think anyone and everyone should be able to expound on their idiotic ideas about the future of the Armenian Nation without a vociferous response. We are infected by this generalizing principle that everyone’s opinion matters: no, everyone’s opinion does not and must not matter; it is disastrous to think otherwise.

When everyone’s opinion matters, a yellow journalist-cum-populist with no moral compass and a thoroughly incompetent team of rejects are welcomed with open arms to head a government of a country at war. When everyone’s opinion matters, you end up with a pathological liar heading a government that drives a country into the ground, destroys its institutions, sends 5000 men to their deaths and tens of thousands more to hospitals and hospice, and displaces tens of thousands more.

No, your opinions on Armenia’s military don’t matter when compared to people like Karen Vrtanesyan, the coordinator of Razm.info, or Vahagn Mkhoyan, people who spend their waking hours reading, analyzing, and writing about Armenia’s and the region’s militaries, who can recite for you what is in the arsenal of the Azerbaijani military and where it’s stationed or the names and ranks of the Azerbaijani officer corps. There is a reason why these guys knew war was going to happen – and warned about it.

No, your opinions on Armenia’s statistics don’t matter when compared to people like Hrant Mikaelian who has spent years studying, analyzing, and writing about Armenia’s economic, political, and societal data sets and statistics.

No, your opinions on the heroes of Armenia don’t matter when compared to people like Edgar Elbakyan, who has spent nearly a decade studying the first Artsakh War and knows not just every nook and cranny in Artsakh, but knows the name of each in Armenian and Azerbaijani.

No, your opinions about Azerbaijan’s domestic political situation don’t matter when compared to people like Anzhela Elibegova, whose days begin and end with reading Azeri news sources.

No, your opinions about Turkey’s state of affairs vis a vis Armenia don’t matter when compared to people like Lusin Sahakyan or Varuzhan Geghamyan, whose lives are spent reading, studying, and writing about Turkish politics and society.

No, your opinions about Pashinyan’s team and plans don’t matter when compared to people like Artur Danielyan or Marine Manucharyan who are familiar with the inner workings of the people and organization which led us to this catastrophe.

No, your opinions on a vast swath of Armenian current affairs don’t matter when compared to people like Mher Almasian and Alen Zamanyan, both of whom can recite data, names, facts, figures, interviews, affiliations, and histories about Armenia’s politics and economics that would make your head spin.

There are others, if you can believe it.

Not surprisingly, all these people have written at various points about the great discrepancies between what the foreign-funded activists, outlets, and NGOs in Armenia have constantly constantly propagandized the population with and the actual facts. Did anybody listen? No, it was easier to listen to the garbage opinions of halfwits for whom a single data point confirming the opinion of their halfwit uncle was sufficient to convince fellow halfwits of the impending downfall of the Armenian economy or that Armenian soldiers were fighting against Azeris with shovels in 2016 or that Kocharyan had $4 billion or that Armenia was essentially a Russian vassal state.

And allow me to offer an unpopular opinion here: if you have no ability to read these sources in Armenian, you should think twice about waxing cheeky about what you think are facts because you read or heard them from the few sources that offer anything in English or because your relative in Abovyan told you that he knows a guy who knows a guy.

Nobody is saying you shouldn’t be a part of the conversation but for goodness sake, try a little. Don’t take your talking points from a rock star or any imbecile they stick in front of a camera because they can’t find anyone else to interview.

It’s not pleasant being told that you don’t know something, especially when there are so many people who are ready to tell you that you do. I know, you probably got a fancy degree at a fancy college. Maybe you’re the first person in your family to do so and you should be proud of yourself for that. Maybe you even went to one of the top schools in the world on a Luys scholarship but do not see anything immoral in vociferously attacking Serzh Sargsyan and the Republican Party that made it possible. Fine. But have enough humility to consider the possibility that you know less about something than your interlocutor.

When someone challenges your assertions, do you respond with verifiable facts? Are you be able to provide details? Are you able to offer evidence of your claims? Are you willing to make a similar assertion about a non-Armenian topic in a non-Armenian setting, say during a debate at Oxford Union? No? Then maybe it’s best you don’t do it just because you have a screen and a keyboard and you’ve been told since kindergarten that your voice needs to be heard. It doesn’t. Indeed, it’s the constant stream of inane bloviating charlatans who chose to talk about things they know nothing about and the people that listened to them that led us to this day.

Getting to the truth is hard work. Indeed, before the worldwide curse known as social media, it was the difficulty with which we attained knowledge that made it valuable. The problem is precisely with those out there who devalue knowledge and who think nothing of jettisoning accumulated wisdom in favor of slogans, memes, and sophistry. That is how we got here: people among us devalued knowledge and those who have it.

The evil is curable through effort and restraint. However, for those who insist on behaving like it is not, let them not be surprised when they have vials of my wrath poured upon them.