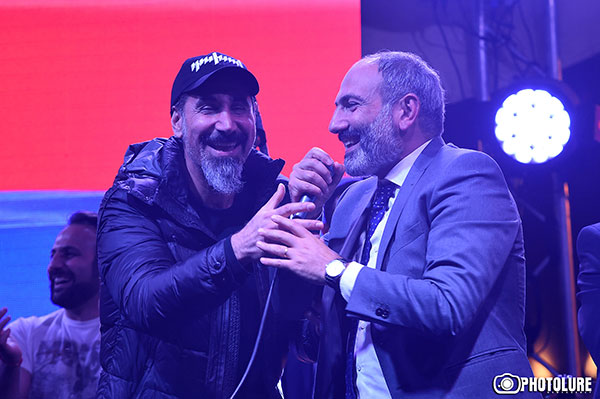 Useful Idiots of the “Revolution”

Over the years, a few Diasporans have been more visible in Armenia’s political ecosystem than others. They have been used to promote the narratives that brought Traitor Nikol Pashinyan to power.

Why these entertainers were in Armenia, why they were commenting on internal Armenian political issues they had absolutely no direct interest in is anybody’s guess. But, because I am a benevolent soul and don’t want to leave you guessing, I’m going to tell you: they were useful idiots. That is, they were used for a purpose unbeknownst to them and they performed, as entertainers might, perfectly.

Chief among these was Serj Tankian.

The previously-beloved and talented rock star was among the biggest supporters of the Traitor Nikol Pashinyan. His fame, his yearning for relevance beyond his undeniably good music, and his willingness to inject himself in situations he had absolutely no idea about were a perfect mixture of factors ready for exploitation. For years, he was commenting on internal Armenian affairs, almost always for CivilNet (no surprise), pontificating on every manner of internal issue he was told to pontificate about with the self-assuredness only a multimillionnaire living in Malibu could allow himself when discussing something he has was ignorant about. This culminated in him becoming something of a face of Traitor Pashinyan’s “revolution” in 2018, giving interviews to the likes of the BBC and others. Then, because opportunism knows no bounds, he made a documentary film about the whole thing.

If you want a bit of insight into the mind of this intellectual powerhouse, see this quote from a Rolling Stone interview: “I do not believe in wars and ultimately borders but I deeply believe in self-determination and life without oppression.” It seems we’ve learned that “not believing” in wars, whatever that means, doesn’t make them go away. It’s also unclear how you can believe in self-determination, a principle that presupposes the right of a people to live within the borders they choose and not believe in borders. Well, nobody said it had to make sense, it just needs to sound profound. This is the type of person that encouraged thousands of people to hit the streets, this person influenced international opinion, this person still lives in his mansion thousands of miles away from Armenia as POWs and villagers on the edges of Artsakh have been abandoned to Azerbaijani forces by the government he helped bring to power.

Any apologies? No. Any calls for Traitor Nikol to step down? No. He must not have received the command to speak. No script, no statement.

Another case is the useful idiot power couple of Arsinée Khanjian and Atom Egoyan.

Whenever there was a protest in Armenia, Khanjian, who presents herself as an actress although it’s unclear what she’s acted in of any note except Egoyan’s films, was there, yelling and doing the histrionic things any poorly trained thespian resorts to doing when they’re unable to manage the more nuanced varieties of acting. For many, she was the face and the representative of the Diaspora in the culture of perpetual protest that had infected Armenia.

Egoyan, a talented film director who knows as much about the electoral process as I do about cinematography, was sent off to the boonies during Armenia’s elections in 2017 and given a script to recite about the voting irregularities he was told to say took place; the charade was unbearable. Like Tankian, these two have been coincidentally conspicuous on CivilNet any and every time they had something to say or do in Armenia.

Any apologies for bringing this tragedy upon the Armenian Nation? No word from Toronto, last I checked.

Arsinee Khanjian speaks for the Diaspora no more than a pizza delivery guy in Watertown and Serj Tankian’s opinions on Armenia’s politics are about as useful as a parka in the Congo. But, somehow, someway, they were always thrust to the forefront of the conversation. They helped shape public opinion not only in Armenia but also in the Diaspora. They were brought in when necessary to increase popular support for political games that were way over their heads, they helped to bring the curse that is Nikol Pashinyan upon the Armenian Nation, a homeland was lost, tens of thousands of people left homeless and many others left to the whims of the barbarians to whom their homes have been left, all due to what they helped usher in. But what of it? Malibu and Toronto are far from Karvajar and Vazgenashen. They are not the ones who will have to house the refugees, they are not the ones who will live with Armenia’s impending economic collapse, they are not the ones who will rebuild the country. They drop in, do their work, and return to the opulent existences that the people whose lives they’ve changed forever would not be able to fathom in a thousand years.

And this is the state of our nation. We have such a low standard for what constitutes an exemplary Armenian that Serj Tankian, a rockstar-anti-nationalist-activist is hailed as a sage of the Armenian political scene. Foreign-funded Armenian media outlets bandy his irrelevant opinions about what’s going on in Armenia as gospel and thousands of young people are influenced by the uninformed and evidently dangerous opinions he spews.

Serj Tankian, Arsinee Khanjian, Atom Egoyan, and the rest of them are only useful in delivering the required message when there is someone listening to them and repeating what they say. In other words, other useful idiots are needed. Don’t be a useful idiot.