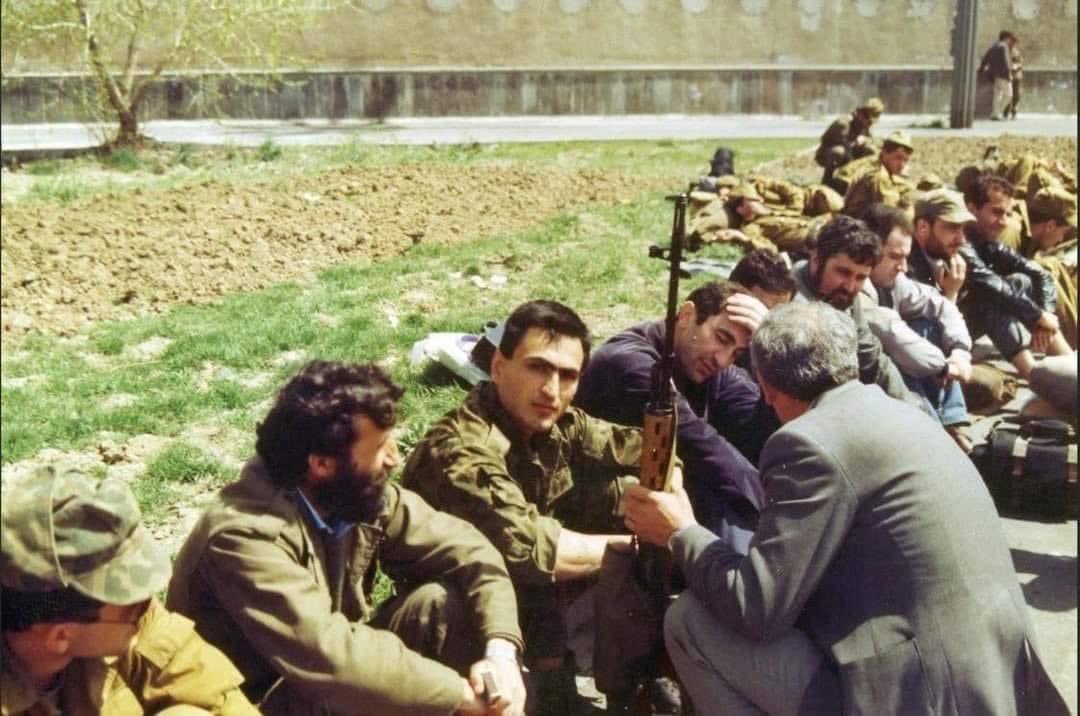 This photograph was taken on April 14, 1992 in Armenia. Take a closer look: sitting next to young Dushman Vardan is Robert Kocharyan. They are just two of the hundreds of volunteer soldiers that are gathering in Yerevan’s small Erebuni airport in anticipation of operation “Wedding in the Mountains,” the battle for the liberation of Shushi, which begins mere weeks from this day.

Those who volunteered knew—and were told in no uncertain terms—that this was in large part a suicide mission. Not only were the Azerbaijanis better equipped and greater in numbers, they also held strategically-higher ground that made defending the city easy.

Indeed, virtually every fighter that was part of the first wave of the attack was killed in combat. Robert Kocharyan, already a seasoned veteran of the war, made the choice to participate in this fateful battle.

We are largely defined by the choices we make. As a young man with three small children, Robert Kocharyan, like the countless brave soldiers sitting on that stone bench, made the choice to fight for Armenia and Armenians. That is what was most important to him.

Think about what you think of a man that makes a choice like that—about him, his values, his family, his motivations, etc. This is the appropriate context in which to measure Robert Kocharyan’s life.

Of course, it does not absolve him of all, or even any, of his sins. However, whenever you come across someone making claims about Robert Kocharyan “looting” the country and stealing “billions,” ask the person making those claims for proof. If these claims are true, there should be some evidence, especially since the man has been under intense investigation by Pashinyan’s government for more than two years now. I used to believe these accusations myself, in part because it seemed naïve not to.

But the truth is that if there was any real evidence of Kocharyan’s wrongdoing, Nikol would be screaming about it from his rooftop and play it on repeat on H1 – and ZibilNet. In fact, he would have been found guilty of corruption by a court under pressure by the government.

But the exact opposite has happened. Enough is enough. Whatever his faults, Robert Kocharyan has demonstrated a fierce devotion to the well-being of his country and its people, as well as the competence of an effective statesman.

I am eager to see a new generation of leaders in Armenia take the mantle; in fact it is essential that this happens. But as it stands, Robert Kocharyan is the best choice to lead Armenia out of the abyss that is Nikol Pashinyan—and into the future.

Follow up to this for the inevitable zombie takes: Serzh Sargsyan, Vazgen Sargsyan, and Kocharyan ultimately took on important roles in organizing the war effort. Vazgen Sargsyan for example never stepped foot on the battlefield, but only an idiot would say his role is exaggerated.

These men were giants—and it is on their shoulders that we have built a future for our children. That future is threatened by Nikol and his supporters.

Published in History and Politics