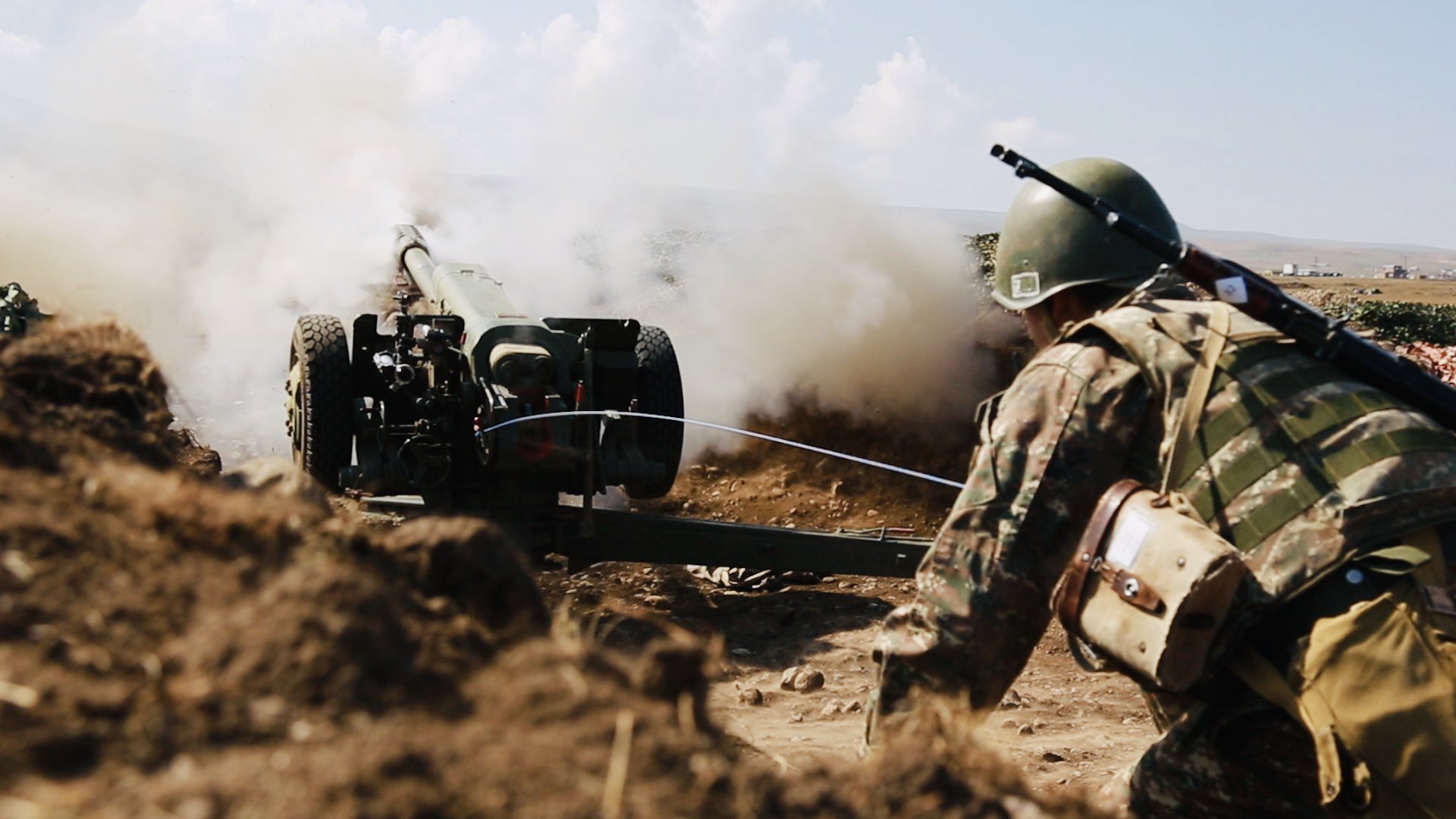 Less than 24 hours ago, Azerbaijan launched its second attack of 2020, this time on the Artsakh Republic. Here is a summary of the major news.

This comes a mere two and a half months after Azerbaijan launched attacks against Armenia’s Tavush region and threatened the Metsamor Nuclear Power Plant.

The attack, which started in the early morning hours of September 27, 2020 Armenia time, was directed toward several positions all along the Artsakh’s front and included Azerbaijani shelling of Stepanakert, Artsakh’s capital, for the first time since the Artsakh Liberation War.

The attack, immediately supported by Turkey, has involved a long list of heavy artillery including Smerch, Kasirga, and Polonez rocket systems. Also used were drones, tanks, and armed personnel carriers, many of which were destroyed by Armenian forces.

Artsakh President, Arayik Harutyunyan, stated in a press conference given later in the day that the attack also included Turkish F-16s and specified that Turkish-produced Bayraktar drones were used; the latter was effectively confirmed by the producer of those drones later on.

As a reminder, during Azerbaijan’s attacks on Armenia in July, Azerbaijan’s Deputy Defense Minister made a sudden visit to Turkey. After Azerbaijan launched the attack backed by his government, Turkey’s president, Recep Tayyip Erdogan, accused Armenia of being the biggest threat to peace in the region. The editor of a large Turkish newspaper, Yeni Safak, called for the bombing of Yerevan.

There are also reports that 4,000 jihadists from Syria have been hired by Azerbaijan as mercenaries and video evidence corroborates the report.

Over 10,000 people have contacted Armenia’s Ministry of Defense looking to volunteer to be sent to the front. Several volunteer militias, including from the Armenian Revolutionary Federation, have organized and dispatched their own volunteers.

Armenian forces destroyed 27 drones, 4 helicopters, and 33 tank and infantry fighting vehicles. Additionally, Ministry of Defense spokesman Artsrun Hovhannisyan reported that there were 200 confirmed deaths on the Azerbaijani side.

Artsakh’s Ombudsman, Artak Beglaryan, reported that there were several wounded civilians in Artsakh due to the the shelling of civilian areas by Azerbaijan. There were also two deaths, one elderly woman and one young girl.

Non-combatants were sheltering in basements throughout Artsakh.

Harutyunyan, not long after attacks began, stated “If they’ve declared war, a war is what they’ll get.” In his later press conference, he also condemned the international community for their irresolute statements on Azerbaijan’s attack and for blaming both sides.

The President of Armenia’s National Assembly, Ararat Mirzoyan, just said from the dais that Artsakh’s independence is not negotiable.

Azerbaijan’s dictator, Ilham Aliyev, gave an address in a public broadcast where he did what he typically does, which is blame Armenia and Artsakh for all the things that Azerbaijan itself has done. While delivering the prepared statements, he looked unsure and stuttered several times.

Later, Azerbaijan’s parliament declared martial law and curfews in many of Azerbaijan’s cities including Baku and Sumgait.

Throughout the day, Azerbaijan disseminated false reports that they had occupied Fizuli and Jabrail, neither of which were true. They also claimed hundreds of Armenian deaths, which were also false (see below).

Following a previously scheduled meeting between the Catholicos of All Armenians and the Pope, the two issued a statement stating that peace and stability can be reestablished only by respecting the rights of Artsakh’s people and by ensuring justice.

As usual, the OSCE offered one of the weakest statements, again failing to condemn Azerbaijan for launching unprovoked attacks. It also failed to mention Turkey’s role, which has been publicly stated.

OSCE Chairman, Edi Rama, “I urge all involved to immediately return to the ceasefire before the human toll of this conflict increases any further.”

“The Co-Chairs view with concern reports of large scale military actions along the Line of Contact in the Nagorno-Karabakh conflict zone. We strongly condemn the use of force and regret the senseless loss of life, including civilians. The Co-Chairs appeal to the sides to cease hostilities immediately and to resume negotiations to find a sustainable resolution of the conflict.” Read here.

US Department of State

The US Department of State urged “both sides to cease hostilities immediately” but alluded to Turkey’s destabilizing role saying, “The United States believes participation in the escalating violence by external parties would be deeply unhelpful and only exacerbate regional tensions.” Read here.

Armenia’s government called on all those wanting to contribute to make donations through the All-Armenian Fund. However, hackers have maintained attacks on the main site for several hours. Alternatively, donations can be made through the Armenia Fund Western USA website.

Armenian Soldiers Killed in Action as of 27 September 2020

Sixteen Armenian soldiers were killed in action during the first day of attacks. May God rest their souls.

The names of 15 soldiers also killed in action was released by the Artsakh Ministry of Defense shortly after publication. May God rest their souls.

Armenian websites have been under relentless cyber attacks in conjunction with the physical attacks taking place in Artsakh. For this reason, we recommend you follow Armenian sources on their social media channels, in addition to the websites.

Please be exceedingly careful about who you follow and what information you share. Only share news from official sources and do not share speculation or photo and video from unofficial channels as all of these may be used to misinform and stoke fear and confusion.

Published in Military and Politics